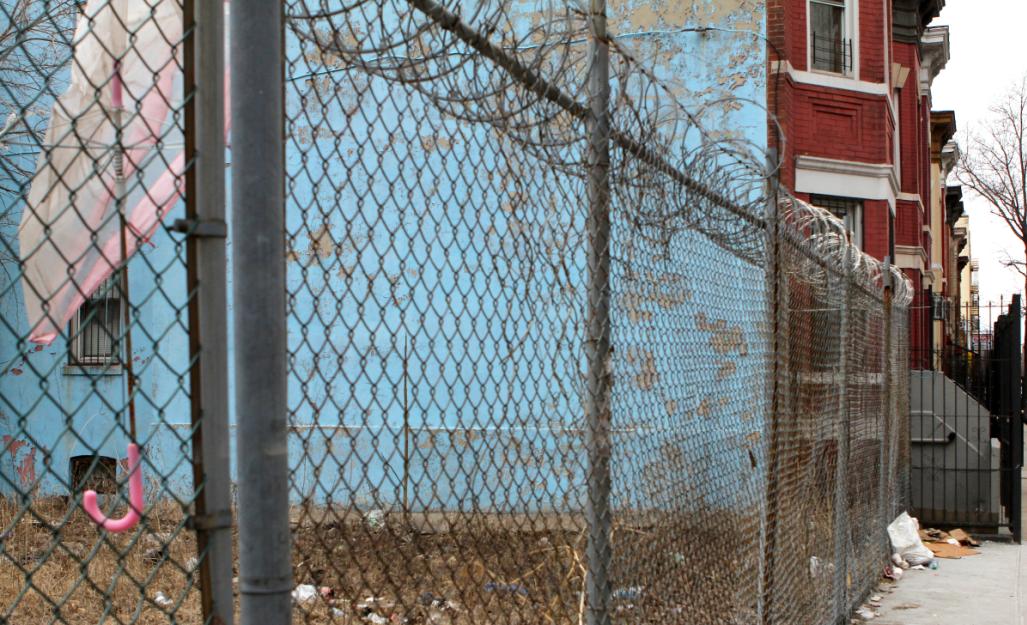 A vacant lot in the Bronx

A neat stretch of row houses comes to an abrupt halt at 2247 Walton Ave., in the Bronx, where a boarded-up house warning of rat poison sits beside a fenced-in lot covered in dead grass and garbage. The site has remained empty for several years and has served as an effective backdrop for media events held by Picture the Homeless, an advocacy group headquartered nearby.

Throughout the Bloomberg administration, Picture the Homeless campaigned for the city to turn the thousands of vacant lots and buildings strewn across the boroughs into affordable housing for the city's growing homeless population.

The group may now have a high-profile ally to champion its cause: Mayor Bill de Blasio.

Before taking office, de Blasio pledged to thoroughly tax and develop the city's vacant land, in part by making vacant residential properties in the so-called outer boroughs subject to the same higher commercial tax rate as those in Manhattan. The move would raise tax revenue and make it prohibitively expensive for landowners to hold onto real estate without developing it, according to the mayor.

In fact, even under the current tax code the city is already not even receiving its due in tax revenue from vacant lots, as shown by Comptroller Scott Stringer's audit of vacant lot classifications. Stringer's audit showed that the city's Department of Finance "improperly classified the tax and building classes of 308 vacant properties throughout New York City, resulting in an annual real estate tax loss conservatively estimated at $1.7 million."

Along with changing the tax code, Mayor de Blasio also advocates for the creation of a non-profit public land trust that would allow the city to more efficiently acquire vacant property from negligent owners and sell it to more responsible ones – a process that is currently controlled by multiple agencies and holding companies.

The mayor's office confirms that unlocking vacant properties is still a key part of his plan to create or preserve 200,000 affordable housing units. Details of the plan are expected in May.

But, a complicating factor: when the City Council Committee on Housing and Buildings invited city agencies to a hearing on vacant properties last month, it became clear that the picture of vacancy is still fuzzy.

"Integral to the housing plan will be a re-examination of all the city's assets, including vacant land," Vicki Been, the new commissioner of the Department of Housing Preservation and Development (HPD), told the committee.

A bill passed by the Council in 2011 requires city agencies to keep records of the vacant properties that come to their attention. But records remain incomplete.

There are approximately 7,000 privately owned vacant lots across the city, according to the Department of City Planning. Been said that HPD is aware of about 1,100 vacant city-owned properties, 141 of which have buildings on them.

"But that is not the universe of vacant buildings," she said.

Both Been and a representative of the city Department of Finance, which keeps records of the city's privately-owned vacant buildings, said it would be difficult to come up with a precise number of vacant buildings and lots that could be developed for housing.

"It seems like there's no number to start with, even if it's wrong," said a frustrated Jumaane Williams, the new chairman of the Council's housing and buildings committee.

A bill that would require the city to conduct an annual census of vacant properties has been stalled in the Council since 2010. The bill initially received support from several council members, including current Speaker Melissa Mark-Viverito.

In 2011, Picture the Homeless volunteers hit the streets and conducted a survey of vacant properties. They found enough vacant buildings and lots to house nearly four times city's 53,000 homeless people.

"The idea of homes without people while people are without homes offends common sense," Sam Miller, director of policy and communications for Picture the Homeless, said at the committee hearing. "Counting this property is an important first step to transforming this property into housing for homeless people."

For de Blasio, it would be the initial step to determining who would be affected by his tax plan and where in the city new affordable housing could be created.

Existing city records show that Staten Island is the borough with the most square-footage of privately-owned property that could be developed for residential purposes, followed by Queens and Brooklyn.

Private owners of vacant land fall into a wide range of categories, from religious groups to families to major developers.

Supporters of de Blasio's plan say raising taxes would cut back on the developer practice of "warehousing" land in high-demand neighborhoods while waiting for market rates to rise. In his initial proposal, the mayor specifically mentioned targeting developers in areas like Williamsburg, where market speculation may be most frenzied.

Council Member Antonio Reynoso, whose district includes Williamsburg, said he supports the mayor's plan and is especially interested in targeting the neighborhood lots that have been empty for many years.

"The bottom line is that Williamsburg is starved for affordable units and the families that have been displaced in the last decade are a testament," he said in an email.

Andrew Barrocas, CEO of MNS, a consulting company that scouts and markets valuable property for developers in Williamsburg and other parts of the city, says there are two main reasons that developers hold off on building.

"Number one, they have to come up with more equity than they might have thought they needed to when they originally bought the site," he said. "Number two, they could just be having delays getting through permitting and approvals."

One of Barrocas' clients is the owner of the Edge, a partially-completed luxury development on North 6th Street in Williamsburg, which is listed in city records as holding four vacant lots. He says the company is developing according to schedule, not "warehousing."

In order to make money on the property, the city would have to revoke the tax abatements it receives to build affordable units alongside its condos.

Council members who spoke at the vacant land hearing last month cited specific examples of empty buildings and lots in their own districts and expressed a desire to see vacant land put to use.

After years of being overlooked, change may be underway for the vacant lot on Walton Avenue, as well as the rest of the city's vacant properties.

A private developer is seeking approval for a plan to take advantage of city and state subsidies to erect a building on the Walton Avenue site with both affordable units and supportive housing for people with special needs.

And if de Blasio's proposals become a reality, transformations like this one may become more common.

Note: this article has been adjusted to include information regarding Comptroller Scott Stringer's audit report released on March 17.

by Caroline Lewis for Gotham Gazette