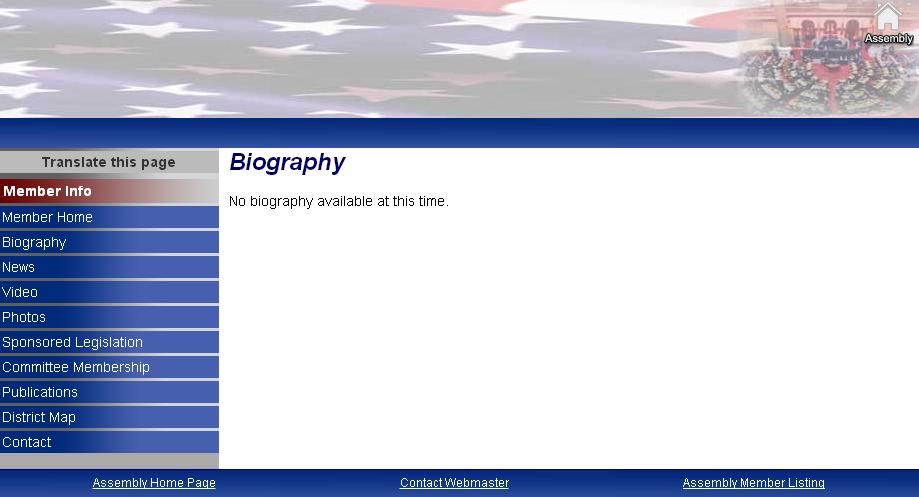 Visitors to the website for the 79th New York State Assembly District are met not by the smiling face of the district's assembly member, but by the simple outline of contact information for the seat's district and Albany offices.

Click the page labeled "Biography," see "No biography available at this time."

The 79th, you see, is currently home to one of ten vacant New York State Assembly seats. That's ten of the state's 150 districts lacking a representative to the legislature's lower house. In the upper house, the state Senate, there are currently two vacancies among the 63 districts. This makes for almost two million New Yorkers, mostly in poorer sections of New York City, left without proper representation.

Making matters worse, there are no set protocols for staffing the offices of districts with vacant leadership and it is budget season in Albany. Not only are basic constituent services not necessarily being performed, but residents of these districts do not have a full slate of representatives seeking their share of discretionary funding.

Despite the pleas of some good government advocates, opinion writers, other elected officials, and constituents, Gov. Andrew Cuomo has stated he has no plans to call for special elections to fill the seats before November.

Cuomo cites the costs of specials and the heightened opportunity for party machines to have outsized influence in choosing the eventual winner if specials are called and turnout is even lower than usual. Some good government groups frustratedly agree with the governor's analysis and support his patience.

However, there have been more than a few cries that "taxation without representation" is ongoing in places like the Bronx's 79th assembly district (AD).

The 79th includes Bronx neighborhoods such as Morrisania, Concourse Village, Claremont Village, West Farms, and Tremont and is almost entirely populated by people of color. According to multiple sources, the district is home to underperforming schools, high unemployment, and a lack of faith in government. Two of the 79th's last three assembly members have left office due to bribery charges, including, most recently, Eric Stevenson, who was convicted in January of accepting bribes. In 2003, then-assembly member Gloria Davis resigned from office amid bribery charges to which she pled guilty.

In between the two, Michael Benjamin served the Bronx's 79th from 2003 to 2010, at which time he opted not to seek re-election. Without an indictment to his name, Benjamin served with distinction, leading to recent calls for him to pursue his old seat. On Friday, Benjamin announced that he would not be seeking election, writing on his website, "It's time for a new generation of honest persons to compete to represent 79th AD. I'll be an interested & opinionated constituent."

And into this power vacuum hopes to step Michael Blake, a Bronx native and veteran of both Obama presidential campaigns. Blake, who by all indications fits Benjamin's description of a new generation of honest office-seekers, is coming off a 2013 spent running Reshma Saujani's unsuccessful campaign for public advocate. Prior to that campaign, Blake served as the national deputy director of Operation Vote for Obama's 2012 re-election campaign and worked in the Obama administration after helping get the president elected in '08.

Blake now seeks elected office himself for the first time in his hometown, where he will be competing in a to-be-determined field that initially includes self-described "community advocate and activist" George Alvarez and parent coordinator Raul Rodriguez.

Reached for comment about the race and the district, Blake said that he would be officially kicking off his campaign "soon" and gave his assessment of problems in the district: "There's no question there's been troubles from an ethical standpoint, economic issues, crime issues, education issues that have been happening in this community. It's clear residents are skeptical, losing hope that politics and public servants can turn things around. They're really jaded, to be honest. There's a very low voting history, it's the poorest congressional district in the country."

To turn things around, Blake said, will require improving the area's educational and economic opportunities. "If you pick up a book and you pick up a check, you probably don't pick up a gun," he said, his voice rising. "I'm confident we can bring together allies, [secure] resources this district hasn't seen before."

On the culture of corruption that seems to be plaguing his assembly district, Benjamin disagreed it is rampant. "Two arrogant and corruptible individuals in the past 12 years shouldn't paint the 79th AD as 'Corruption Central,'" he emailed.

Benjamin affirmed his faith in the next batch of Bronx leaders, "I'm not too worried about this sort of thing repeating itself in the 79th district or elsewhere," he said.

But, the area is troubled in other ways that need immediate attention, he said, citing the lack of a full-service bank within the district and the "black hole" in New York City education that is its middle schools. The district needs "job training for those who are out of school and don't necessarily have the job skills to work these days," Benjamin continued.

When asked about the crop of candidates for his old seat, Benjamin noted that he does not know Blake personally and will be watching to see how much of a connection with the district's communities he can make in a fairly short time. Benjamin noted that none of the initial candidates seem to have "a history of involvement with organizations in the AD."

Each, of course, will beg to differ, as Alvarez and Rodriguez already do on their websites and Blake did over the phone, saying, "I volunteer here, I preach locally, the Bronx is home.

"For me, I live in this district, live in this community, I see what's going on, how can I not say it's time to step up and serve?" he asked.

What Blake runs on other than the power of his resume and personality is yet to be seen, of course. But coming from his organizing experience at the national, state, and local levels, it would be a surprise if his campaign is not well run.

Asked what advice he would give to whomever fills the 79th assembly district seat as of 2015, Benjamin, who held it for eight years, said, "The same [advice] given me by a local businessman 11 years ago, 'Stay honest. Work for the people.'"