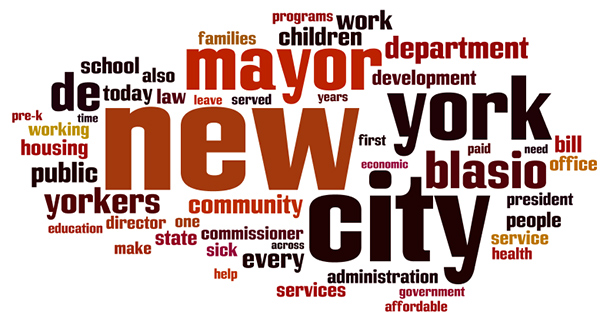 A visual representation of the 50 words appearing most often in a large sampling of statements, speeches, and press releases from Mayor Bill de Blasio during his first 100 days in office (98 to be exact: January 1-April 8). The word cloud has been set to show words larger the more they appear in those statements and releases. Also, the tool was set not to include basic words such as "a," "and," and "the." The representation does not include question-and-answer sessions the mayor participated in with the media, but includes his inaugural and preliminary budget speeches as well as most of the press releases announcing administration appointments and key initiatives.

For more information and the text of said speeches and statements, see the news page at nyc.gov.