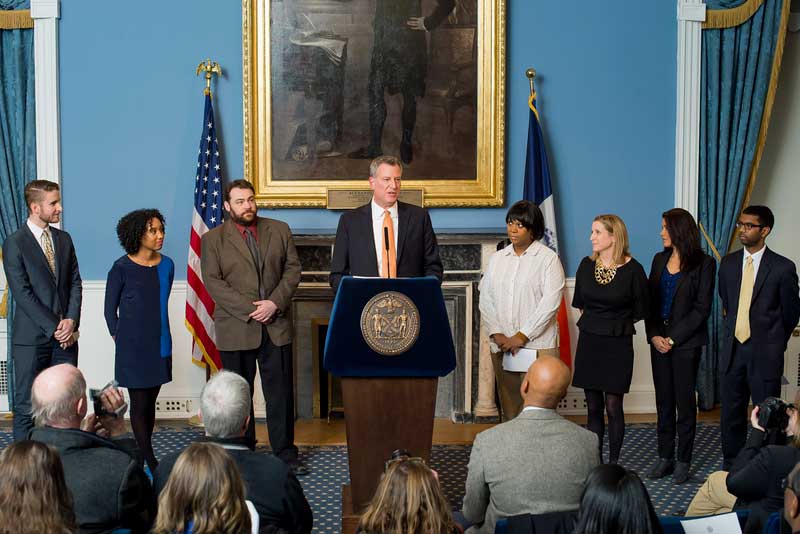 What to look for in New York politics this week, via the city and Albany:

After another busy week in New York City politics highlighted by the introduction of a bill in the City Council to provide municipal identification cards to all New Yorkers, including undocumented immigrants, and Mayor Bill de Blasio's speech "On the Future of New York City," given on his 100th day in office, the week ahead will surely have its fair share of news.

On Monday afternoon, the mayor will be making an announcement from the Brooklyn Heights Promenade. Politicker is reporting that it is fireworks-related.

Speaking of fireworks, there have also been reports that the battle over the next head of the Mayor's Office of Media and Entertainment has become quite contentious. Whether or not a film commissioner appointment is made this week, look for at least one or two major administration appointments as the lengthy mayoral transition concludes. Many have at least one eye on the post of FDNY commissioner, perhaps the most high-profile appointment the mayor has yet to make.

The announcement from the mayor's office explains that the report will be unveiled at an event on Thursday, April 17th, the details of which have yet to be foretold.

The city at-large awaits further word on municipal union contract negotiations, but it is unclear when any might come. The clock is ticking, however, as the administration returns to the fiscal year 2015 budget after the mayor released his preliminary outline, the City Council held a month of oversight hearings, and the State came to terms on its own budget deal. New union contracts should be settled by June 30 at the latest, the city's comptroller, Scott Stringer, has warned, so that they can be accounted for as the City Council passes the budget that day.

Typically, the mayor releases his revised executive budget in late April, which prompts the next round of council oversight hearings leading into the end of June agreement.

The City Council itself has no full-body "stated" meeting or any committee meetings scheduled for the week as the Passover and Easter holidays arrive and council members attend to constituent services in their districts, continue budget discussions, and prepare for the next round of those meetings, which begin on the 23rd.

The city's Department of Education (DOE) has been busy of late as chancellor Carmen Fariña revamps things under her purview. The DOE announced significant organizational overhaul last week after several policy items of late, including heightening requirements for becoming a principal and reducing the role of standardized tests in the student promotion process. The DOE has said that further announcements should be expected soon.

And a few things to look for from Albany:

Legislators continue their long post-budget April break this week - the Senate returns to the capital on the 23rd, the Assembly on the 28th - but that doesn't mean all is quiet in Albany. The fallout from Gov. Andrew Cuomo's decision to abruptly end The Moreland Commission on Public Corruption continues. Last week, Manhattan U.S. District Attorney Preet Bharara issued a stiff rebuke to Cuomo when his office seized Moreland's files and Bharara slammed Cuomo's decision to end the commission in an interview with WNYC's Brian Lehrer.

Bharara indicated that he would be inclined to look into allegations that Cuomo meddled in the commission. Moreland commissioners continue to speak to the press about their frustration with the Cuomo administration's involvement in the commission, albeit anonymously. Expect to hear more about Moreland this week.

The Moreland debacle comes as two men vying to replace Cuomo have geared up their campaigns and unions and progressive groups have expressed exasperation with Cuomo's agenda.

Westchester County Executive and Republican gubernatorial hopeful Rob Astorino seized on the Moreland controversy to attack Cuomo and demand he investigate Assembly Speaker Sheldon Silver. Green Party candidate Howie Hawkins began a tour touting the "Green New Deal" as a progressive alternative to Cuomo's right-leaning economic agenda. Hawkins earned a surprising 50,000 votes in his challenge to Cuomo four years ago. This race is only going to pick up steam as spring blooms.

The other recent controversy in Albany that is sure to make more news this week is the argument over a public campaign financing system, especially the pilot program for the state comptroller's race that was part of the state budget deal of April 1. Comptroller Thomas DiNapoli has declared he will not opt into the program, railing against the process by which it was designed.

Meanwhile, the resignation of health commissioner Dr. Nirav Shah has Albany on alert for potential action on hydraulic fracturing, or fracking. Shah has been documenting a health study of the process for three years and faced tremendous pressure to make a recommendation for or against the process. Some expect Shah's resignation could indicate that a decision from the Cuomo Administration on whether to allow the process is imminent.

With things appearing relatively quiet in Albany and city government, look to some of the 2014 electoral races for a bit more action - especially the race in New York's thirteenth congressional district, where Rep. Charles Rangel is facing stiff opposition in his reelection bid.