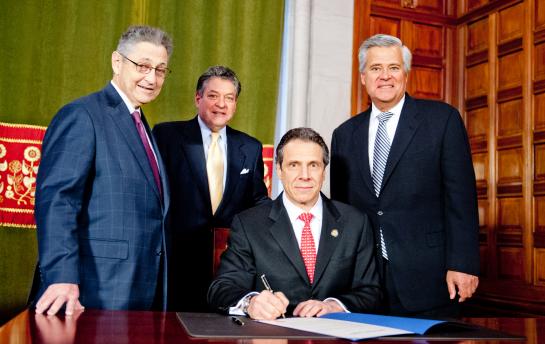 Will the governor soon be signing a medical marijuana bill into law? (nysenate.gov)

The State Legislature appears to be moving closer to a deal on medical marijuana as amendments are set to be introduced to the Compassionate Care Act that would make the bill more palatable to members of both the Assembly and the Senate.

The amendments mostly concern specifics of eligibility and oversight and are being hammered out as the Legislature sets to return to session in Albany on Monday.

Earlier this month Assembly Speaker Sheldon Silver dismissed the legislation because he felt the Senate was not prepared to move the bill, but the bill's sponsor, Sen. Diane Savino, has used parliamentary maneuvers to defy Senate leadership and move the bill through the committee process while also negotiating changes to the legislation to garner more support.

"The next person who needs to weigh in and say: 'I don't like this, but I do like that' is the governor," Savino said during a phone interview on Thursday afternoon.

"There is a lot of momentum behind this all over the state," said Gabriel Sayegh of the Drug Policy Alliance of New York. "Patients are literally sick and tired of being put off, of being told to wait. Twenty-one other states have done this successfully including the latest in Maryland."

The Compassionate Care Act would allow licensed doctors, nurses and physicians' assistants to prescribe medical marijuana to patients with "severe life threatening or debilitating diseases." The state Health Department would register hospitals, businesses and non-profits to sell marijuana and the State would tax its sale. An advisory committee would be created to help the health commissioner in clinical matters.

The new amendments are designed to win over those skeptical of how loose, or tight, the controls on the system will be. Patients would have to be 21 to smoke marijuana regardless of their disease, while patients under 21 could use other delivery methods. A number of diseases are to be added to the list of those that can be treated with marijuana, but the process for adding diseases in the future has been restricted.

In an effort to make sure the health commissioner does not have too much power over the process the advisory board has been strengthened and its makeup tweaked. "We don't want a situation where one person has too much power as we saw in the case with Dr. Shah," said Savino, referencing Dr. Nirav Shah, the state's recently departed health commissioner who oversaw a lengthy review of fracking. "We also don't want every single change to have to be approved by the Legislature," Savino added.

The amendments also restrict who can work at marijuana dispensaries, preventing those with drug-related offenses from doing so.

Sayegh had yet to review the amendments but said that his general concern is that, "We want to make sure doctors and patients aren't unduly restricted." He said he expects the amendments were negotiated to "account for concerns" and added: "We are excited about this momentum but there is undoubtedly going to be some challenges ahead to getting this done."

The bill won't likely come before the Senate's health committee for another two weeks. In the meantime Savino says she wants to hear from Cuomo. "We really want his input on this. We really want three-way negotiations with the governor."

The governor's office did not immediately return a request for comment.

About two dozen advocates will be in Albany to lobby legislators on the bill on Monday, when both houses return to session, and Sayegh said lawmakers should expect to see advocates en force for the rest of session.
***
by David King, Albany Editor, Gotham Gazette
@DavidHowardKing