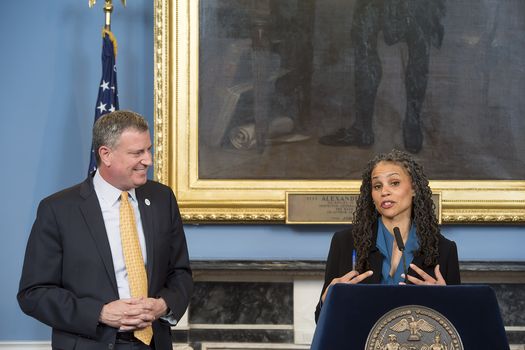 NEW YORK - At the first City Council hearing on the proposed Open FOIL bill on Monday, June 9, the de Blasio administration made a surprise announcement by unveiling its own City Hall Open FOIL portal.

The portal, which went live the morning of the hearing, allows citizens to submit and track Freedom of Information Law (FOIL) requests online. To protect privacy, tracking numbers, not names of requesters, are used. The data made public on the portal is limited: tracking number, status (received, pending, completed), date of submission, and date of determination - if it has been reached.

"We see the City Hall tracker as an excellent first step," Maya Wiley, Counsel to the Mayor said during her testimony on Monday in front of the Council's government operations and technology committees. "We will be able to use it as a pilot, evaluating its functionality and determining how to scale what works."

Wiley said the administration had been working on the portal since January. It only includes requests made to City Hall, not to other agencies and it will not show all requests, only those deemed "in the public interest" by the administration.

The Council bill, as introduced by Council Member Ben Kallos, would require all city agencies to be on an Open FOIL portal within one year. The bill would require much more robust reporting from the City. As proposed, the bill would not show the name of the requester, but would have a status, date submitted and filled, as well as the data from the request.

Wiley was careful not to come out against the legislation, instead saying the administration supports its goal.

"We are in support of the goal of the bill which is a single online city portal," Wiley said following the hearing. "We think what we need to do is go through a very thoughtful assessment process to make that work and work well.

She added, "We want to take the interest of users and make sure government is going to do it effectively. We think that requires a process of assessment that has not happened yet."

One of the issues the administration has with the legislation is its time frame. The bill requires all city agencies to comply within one year, something Council Member Kallos said was possible using the software the City of Oakland used to create its open FOIL portal. Kallos also pointed out the administration put together the City Hall version in just over six months.

But Wiley pushed back, arguing the complexity and exemptions of some agencies would make a citywide rollout much harder.

"This is a massive undertaking that will require resources not readily available," Wiley said.

She gave no timetable for when other city agencies should be required or would be ready to put FOIL requests online. Without a law in place to force the administration's hand, the process could take years.

Concerns of the Fourth Estate
The Council bill would put information received from FOIL requests online publicly. This provision has raised some concerns among reporters, who argue it could compromise their competitive advantage when pursuing stories.

If a reporter files a FOIL request and in fulfilling it the information is put online, another reporter could see it and use it for their own story. A panel of journalists testified about the bill on Monday, raising these concerns (this reporter was on the panel, representing herself, not Gotham Gazette).

Good government groups argue that reporters can FOIL the FOIL requests of other reporters or news agencies. But Wiley said those requests would not be filled because state law protects commercial enterprises.

"At the end of the day our business isn't who gets what story, when, and how, but certainly we have to follow the law and protecting a commercial enterprise and not ensure one news outlet gets a competitive advantage over another," Wiley said.

The Cuomo administration in Albany currently fills those types of FOIL requests, according to John Kaehny of The New York City Transparency Working Group.

"We may not like it, but if it is something that is allowed by law, it is something that has to stand," Azi Paybarah, a reporter from Capital New York said at the hearing. "If the city administration is taking it upon themselves to interpret it in a different way than in the past...that could itself explain why the Council needs to legislate this rather than have an agreement with the current administration."

Paybarah further argued that governments change and having a law would stand over time and administrations.

"When there is a reliance on a government saying 'we give you our word we will provide this information on a regular basis,' it is nice to have that tradition, but what happens when governments change, administrations leave, officials leave?" Paybarah said. "I think the idea there is no need for this legislation is overstating it somewhat."

The online portal unveiled by the City at the hearing will add a level of difficulty to getting the Council bill passed. Kallos said while he is excited to see the administration put forth its own portal, he believes there should be more information on the site about the requests and is eager to extend the system citywide. It is now up to the two sides to figure out a path forward.

"I promise you I remain unswayed by the administration's repeated requests for me to not legislate on various topics for the time being," Kallos said. "I am a legislator and that is the tool that I have - legislation and oversight."

Kallos also said, though, that he hopes to be able to "come to an agreement on language that respects all the issues brought to us by the administration."

"At the end of the day," he said, "it is great to have an administration where we all agree and are trying to figure out how to get the most perfect system possible."