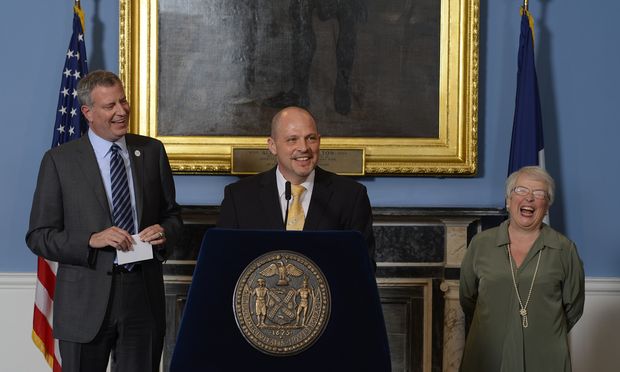 NEW YORK - On Monday morning the Manhattan Institute convened a panel of experts to discuss the fiscal implications of the City's contract deal with the United Federation of Teachers (UFT). The panelists outlined the accounting steps Mayor Bill de Blasio's administration took to achieve the deal and the possible implications those moves may have when trying to settle the other roughly 150 municipal union contracts.

"It's clever accounting. It's not how I would do it, but I do think there are protections about what can and cannot happen," Charles Brecher, research director for Citizens Budget Commission, a nonpartisan fiscal watchdog group, said at the event. "The system put in place after the fiscal crisis, which requires the city to balance its budget using generally accepted accounting principles, more or less worked."

The UFT deal is designed to cover raises dating back to 2009, the first year the union was working under an expired contract. At the time the teachers contract was due to be renegotiated, the global economy was on the brink of collapse and the city was slashing its own budget as tax returns (revenue for the city) plummeted.

The teachers union was expecting two four-percent raises for 2009 and 2010 based on the pattern that had been set forth by the other union contracts that were settled. Then-Mayor Michael Bloomberg said, based on the economic outlook, the city could not afford the four percent raises for the UFT. When he offered less, they balked and the UFT had been without a new contract since.

On numerous occasions, Mayor de Blasio has said publicly that this pattern will be used for all other unions going forward. Brecher called this a good pattern, one he hopes the mayor can indeed get other unions to follow.

It is how the administration dealt with the retroactive pay for 2009 and 2010 that could get it into trouble when negotiating with the other unions.

According to the generally accepted accounting principles, retro pay must be disbursed in one lump sum, something Comptroller Scott Stringer pointed out when he held his preliminary budget press conference on February 19. The City did not have the reserves to make that kind of lump sum payment, so the administration bartered with the unions, using several accounting methods to draw the retro payments out to 2021.

Brecher laid out the details at Monday's panel. First, instead of giving the UFT the two years at four percent, the City is giving the 2009 and 2010 retro pay over four years at two percent, beginning in May of 2015. To avoid having to pay the money upfront in this year's budget, these payments are being called "restructured conditional raises."

It adds up to the same percentage, but the union saw that the money its members were receiving less in the interim. So the City made another deal: the UFT figured out the difference in pay for each of its members if they would have gotten the four percent raises in 2009 and 2010 versus the longer drawn out payments. The union made the City pony up the difference.

So how would the City account for that money without calling it retro pay? By calling these lump sum payments. These payments will be made over five Octobers, with 75 percent being paid in fiscal years 2019-2021. The payments for teachers who retire after July 1, 2014 will be paid for in Fiscal Year 2014.

Both of these types of payments, the restructured and the lump sum, are conditional. To receive them, teachers cannot be fired or quit prior to the end of the contract.

According to Brecher, the city maneuvered - albeit creatively - the generally accepted accounting principles to get to a deal that has risks, but is within the rules. The City has received affirmation regarding its fiscal outlook from major bond rating agencies as well as both the city and state comptrollers.

Not everyone at the panel agreed though. After listening to Brecher's lengthy explanation of how the City made the deal, Nicole Gelinas, senior fellow at the Manhattan Institute, a conservative think tank, said, "If it takes that much to make this pretend to be affordable, it should give people pause."

She argued the City is paying in the future for work already done and is basically using teachers as a lending service.

Gelinas said UFT President Michael Mulgrew has been telling his union's members they are entitled to get all the retro pay, and the mayor's office has not been disputing the claim, despite the fact they are not calling it retro pay in their financial documents.

Ripple Effect
While Brecher and Gelinas have differing views on whether the de Blasio administration followed generally accepted accounting principles, they agree on at least one thing: this move could backfire in ongoing and upcoming negotiations with other unions.

The uniformed unions (police and firefighters among them) have already balked at the pattern of raises the mayor set, claiming it is too low. They have said they are willing to go to an arbitrator, where historically uniformed unions have been successful. Brecher said the uniformed unions could argue that the pattern is not the 10.4 percent, but actually the 19.5 percent (which includes the retro pay) because the additional money was not labeled retro pay and will be paid in the future.

In July the New York State Financial Control Board will review the fiscal implications of the new UFT contract. Neither Brecher nor Gelinas believes it will reject the deal.