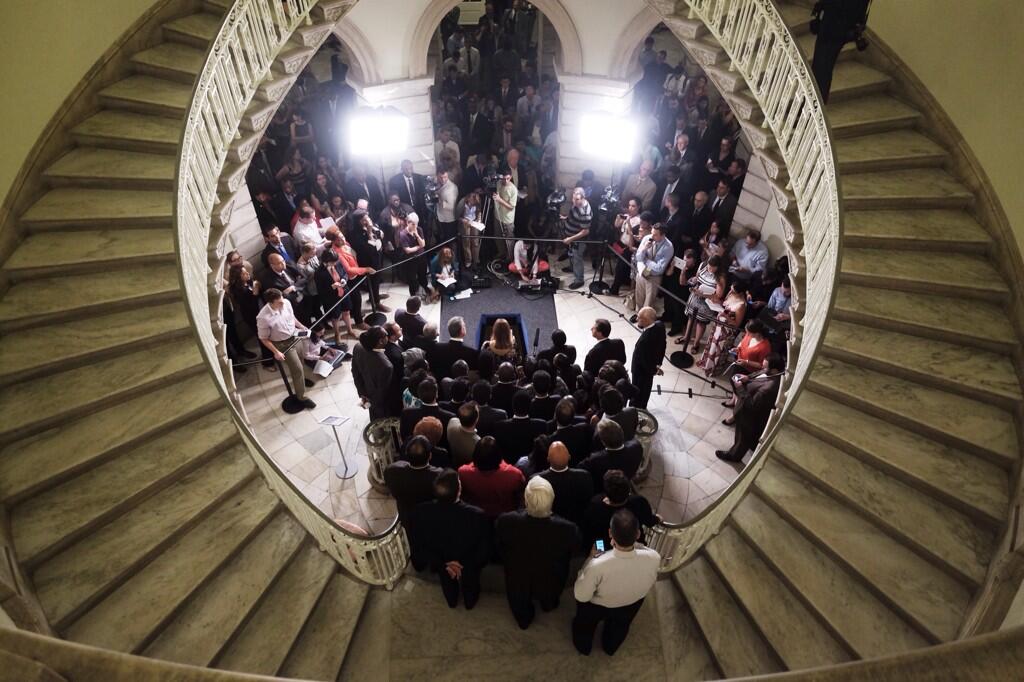 NEW YORK - In a late night press conference in the rotunda of City Hall on Thursday evening, Mayor Bill de Blasio and City Council Speaker Melissa Mark-Viverito shook hands on a $75 billion budget, passed nearly two weeks before the June 30 deadline. The new mayor and speaker walked down the steps of the rotunda and exchanged a handshake and a hug, a customary tradition on budget day.

The budget process was not as contentious as it has been in years prior when former Mayor Michael Bloomberg would propose cuts to vital programs, leaving former Speaker Christine Quinn and the Council to restore funds. De Blasio promised early on he would end the so-called "budget dance" and kept his word.

"We did not play the game of cutting resources from non-profits that were serving communities. We just would not do that," de Blasio said. "We created order, consistency and respect in this process. It was a mutual decision."

Going into the final budget negotiations, the biggest point of contention was the headcount for the NYPD. The Council had asked for the addition of 1,000 new officers. But Mayor de Blasio, with support from NYPD Commissioner Bill Bratton, said the force level is adequate, citing record low crime (murder rates are at record lows, but shootings are up year-to-date).

The adopted Fiscal Year 2015 budget provides for 200 current NYPD officers on administrative assignment to be moved to the streets. Their desk jobs will be filled by civilians, at a cost of $6.2 million.

Speaker Mark-Viverito brushed off the notion that the compromise was a loss to the Council calling it "a true victory."

"I think it will have a profound impact on the ground," de Blasio said. He added that along with the 200 officers, there is $19 million in the budget for a comprehensive citywide plan to reduce violent crimes at NYCHA properties through tenant patrols, youth programs, and domestic violence outreach teams.

The other big ask from the Council was to fully fund school lunches for all New York City school children. The notion was aimed at removing the stigma associated with receiving free lunch and ensuring that all students eat during the school day. The mayor had been against the proposal out of fear of losing federal funding.

The mayor compromised in the budget providing funding for free lunches to all middle school students. The pilot program, which will cost $6.25 million next year, could be expanded to more students, although there is no guarantee.

"We want to give [Schools Chancellor Carmen Farina] a chance to implement it and we believe we will see true success," Mark-Viverito said. "We will then be able to take it to the next level."

On the issue of federal funding, de Blasio said he received confirmation that funds would not be jeopardized with the free lunch program and therefore decided to move forward with the compromise.

Meanwhile, parks advocates got a big win in the 2015 budget: the Council secured more than $15.5 million to help erase inequity among the city's parks, something Council Member Mark Levine, among others, had fought for. The funds will go toward hiring maintenance workers and 80 Parks Enforcement Patrol Officers.

On one other big-ticket item, the Council had asked for an additional $65 million in funding for libraries, which would bring service back to six days per week. That funding was not included in the budget.