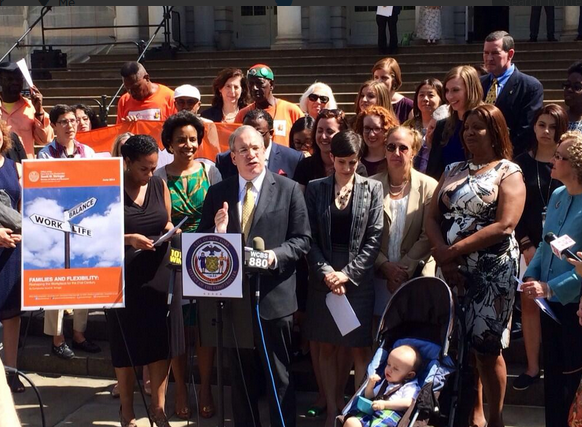 Claims against New York City continue to eat up millions in the budget, with the City shelling out over $500 million last fiscal year for everything from slip and falls to police brutality. In the newly adopted budget for fiscal year 2015 the city set aside $674 million for claims, with cost projections expected to reach $782 million by fiscal 2018.

To combat the growing problem, Comptroller Scott Stringer, whose office plays a central role in the settlement of the claims, is arming himself and key city agencies with a new tool: big data. On Wednesday, July 9th, Stringer launched ClaimStat, a data-driven way to analyze hot-spots for claims against the City.

The system works much like the famed CompStat used by the NYPD, introduced by Police Commissioner Bill Bratton during his first stint as commissioner, 1994-96. In ClaimStat, claims data from city agencies is plotted on an interactive map to visualize problem areas. The idea, much like CompStat with the NYPD, is to identify geographic locations with problem clusters and then find reasons for those clusters and take proactive measures to reduce or eliminate the recurring issue. 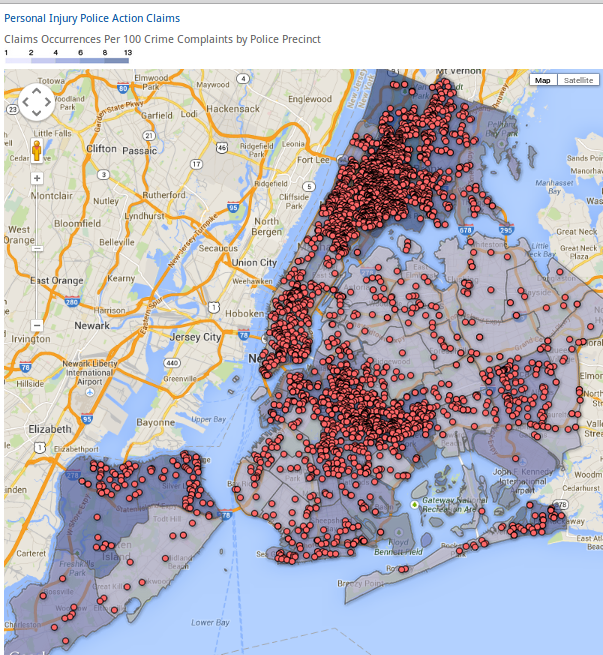 "I believe people should make claims against the City if they feel they have been wronged. That is their right and no one is suggesting they shouldn't sue," Stringer said. "If you see trends people are suing for, then perhaps you should change the policy and prevent that claim from happening."

The first ClaimStat map includes information about claims against five key city entities: the NYPD, Department of Sanitation, Parks Department, Environmental Protection Agency, and Health and Hospitals Corporation. More departments are expected to be added, though the comptroller's office did not provide a time frame for additions. The data will not be updated in real time, but when there are new trends, according to a spokesperson.

City agencies are not required by law to keep their own claims statistics. The comptroller's office publishes an annual report on claims, and while that report has charts and graphs, it did not map the data.

The plots on the ClaimStat map, while useful for visualizing problem areas, give limited information about individual claims they signify. Each data point shows a claim number, and the address and date for the claim. There are different maps for different types of claims, such as those for personal injury by police, tree accidents, sanitation vehicle property damage, and sewer overflow, but the plot points for each provide only the three pieces of data mentioned.

If, for example, the NYPD or another interested party were to try and use the data to see if repeated claims were being made against the same officer in a certain precinct, there is no way to tell from the map. When asked about the limited data on each plot point, Stringer said the agencies could use the claim number to get more information from his office. The detailed claim data, which contains personal information, will not be available on the comptroller's website.

The data used in the comptroller's report and first versions of the maps is from July 2012 to June 2013 (the latest data available), prior to Mayor Bill de Blasio's tenure. Since he has taken office, de Blasio has been proactive to address the rise in claims, specifically those against the NYPD. In fiscal year 2013 there were over 9,500 claims filed and over $137.2 million in judgments and settlements against the NYPD, according to the comptroller's report.

De Blasio put $4.9 million in the budget to fund the newly created Risk Assessment and Compliance Unit within the NYPD. The unit, which will be made up of at least 45 people, is specifically tasked with examining claims and identifying policy changes. This new unit combined with the new leadership of Commissioner Bratton, is expected to drop the number of claims. But it remains to be seen if the recent $41 million Central Park Five settlement will increase the average claim settlement as some experts have suggested.

Claims against the Sanitation Department cost the city $91.2 million in motor vehicle tort claims for fiscal year 2013. Community District 18 in Brooklyn saw the highest number of these claims, with 324.

Vision Zero policies, which promote safer driving as well as improved street design, could potentially decrease some of the claims against Sanitation. But, for multi-ton sanitation trucks, which attach one ton plows during winter and have to navigate narrow roads in treacherous conditions, weather will always play a factor in accidents.

"In mild winters, claims are down; in heavy snowfall winters, claims go up," Sanitation Commissioner Kathryn Garcia said by email Tuesday. "We train and discipline our drivers and continually remind them to be careful. But when they encounter extreme weather conditions, sometimes accidents will occur."

She added, "We welcome the opportunity to work with the Comptroller to continue to mine the metrics and develop new tactics to reduce claims." 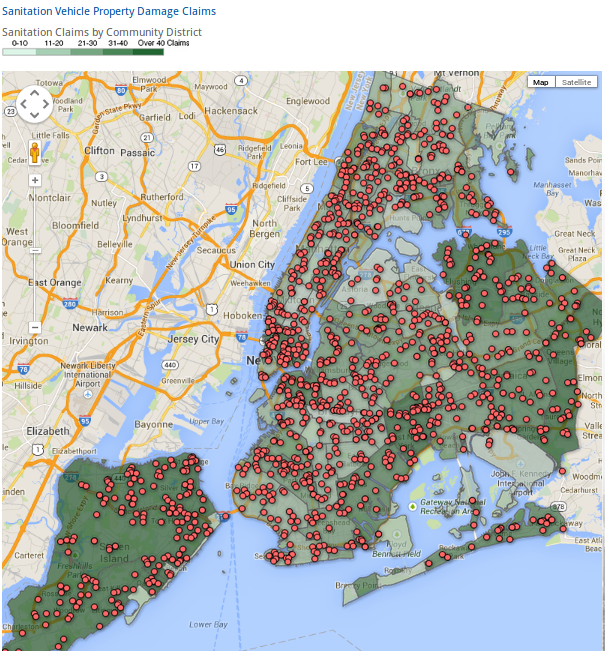 The plot points on the ClaimStat map provide a date for each claim, but there is no way to sort the claims by date to see if, in fact, there were more claims during winter. A feature like that could be added to a third party application built by civic hackers, however the data behind the map will not be released in an open data format, per the comptroller's office.

Data, especially mapped data, is a great asset to identifying problem areas, but without action the data does no good. It will be up to each of the city's departments to make changes based on ClaimState and any other, non-public data at the agencies' disposal. The comptroller will make recommendations, be he said it is not his job to manage departments other than his own. It will be up to department heads, or the mayor, to determine a course of action to reduce claims.

"The Mayor looks forward to reviewing this proposal more closely in the coming days, and welcomes all ideas to make the City more effective and better able to serve its citizens," Press Secretary Phil Walzak said Tuesday by email.