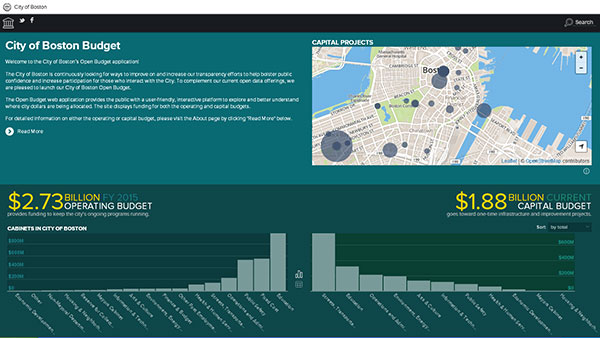 Few documents in municipal government are as important as the city budget. The New York City budget, an annual agreement between the Mayor and the City Council due before or on June 30th each year, dictates the priorities for those elected officials.

"A budget is a statement of values," Mayor Bill de Blasio said at City Hall on June 19 when announcing the fiscal year 2015 budget agreement. "A budget affects people's lives at the grassroots every single day."

Despite its importance, the budget itself continues to be very difficult for everyday New Yorkers to read, navigate, and understand. But, as other cities are showing, this does not necessarily have to be the case.

Following the official adoption of the New York City budget after the Council votes to approve it, the Office of Management and Budget (OMB) puts the budget documents on the City's website. Those documents are released in PDF format, and, unless you are a budget expert or someone who has used the documents before, discerning even what document to search for your desired information can be frustrating. Want to know how much the NYPD budget is this year? Is that found in the "Fiscal Year 2015 Expense and Contract Budget Resolutions" or the "Financial Plan" or the "Budget Function Analysis"?

While releasing data online is more transparent than not releasing it at all, today's data-savvy citizens are beginning to expect more from their government. Publishing data is only half the battle. People also want information that is accessible, intuitive, and useful for making decisions.

Some cities are starting to listen and are making proactive changes. The City of Boston has become a leader in using open data and working with the civic tech community to create applications to help residents in their day-to-day lives.

After years of releasing its budget in PDFs online, Boston decided to use a tool that would present the budget in a way that Bostonians can read and understand. On July 9, Boston unveiled Open Budget. The app, built by software company Socrata, allows users to easily explore the city's budget data, identify city priorities, follow trends, and track capital projects in their neighborhoods and elsewhere.

"The city budget drives the scope of the work the city is doing, so it's important that the public can have the opportunity to dive into it, and understand how we're using the budget to make government work for them," Boston Mayor Martin Walsh said in a press release.

Introducing a budget application like this in New York City would be fairly easy because the city is already a Socrata customer (Socrata built the Open Data Portal) and the app already exists. It would cost about $500 per month for the app, plus a small one time set-up fee, according to a spokesperson from Socrata. It could take as little as a few weeks to launch, but could take longer if the data was not in the proper format, the company said.

Despite the relatively low cost, it does not appear The City of New York is ready to commit to the new budget app just yet.

"Watchdogs have given the Mayor's first budget high marks, delivering a fiscally responsible, progressive, and honest result through one of the most transparent budget processes in city history," Amy Spitalnick, spokesperson for OMB said by email July 16. "We will continue to make the process even more transparent and accessible, as we are always seeking opportunities to use new tools and data to improve delivery of services and increase transparency."

Council Member Ben Kallos, chair of the Council's government operations committee and a champion of opening up government data, said he supports bringing the budget app to New York City because it is, after all, the people's money.

"Every New Yorker should be able to see how their tax dollars are spent in a way that is easy to find and understand," Kallos said via email July 16. "I look forward to working with the administration to bring the same great applications from other cities to New York."

Gotham Gazette sent a link to the Boston budget app to Maria Doulis, director of city studies at Citizens Budget Commission, to see how someone who lives and breathes the city budget would view the application. While it does not provide the level of detail she would need to do in-depth analysis, she did have a positive response.

"It is an impressive tool, and the interface breaks down the spending in a guided way that makes it easy for most citizens to understand where money comes from and where money goes," Doulis said in an email July 10. "New York City puts a remarkable amount of data online, but there are few tools such as this to really explore the numbers."

Some budget data is available on the open data portal, although it is out of date and not all of the budget documents are currently available. The only real visual representation of city budget information is provided by the New York City Comptroller's Checkbook 2.0 website.

While the level of detail on Checkbook 2.0 is much greater than the Boston application (you can, for example, find out how much money the City spent on police cars last year if you know where to look), it can be challenging to navigate and does not have a visual representation of the adopted budget - it only tracks money going out each month and a projected yearlong total.

The budget app used by Boston is not the answer to everyone's problems, at least not in its current form. To do the kind of deep-dive analysis done by journalists and budget experts more detail would need to be provided. But for the average New Yorker who is stymied at the sight of a budget PDF, this tool already offers a pathway to far greater understanding of where their tax dollars go.