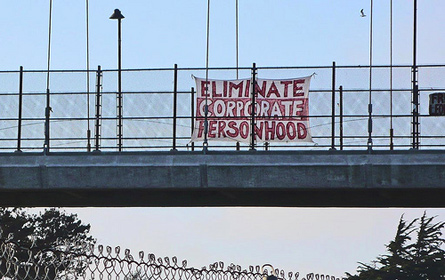 Public Citizens
Last September, as the Supreme Court heard arguments in the Citizens United case on corporate campaign spending, one activist made his or her opinions clear.

In the wake of Citizens United v. Federal Election Commission, the January U.S. Supreme Court decision that overturned a federal ban on certain corporate spending on political campaigns, President Barack Obama said it could "open the floodgates for special interests" at the federal level.

In New York State, the floodgates are already open to unlimited special interest spending, and the public is largely left in the dark about large amounts of this spending. Lawmakers, other public officials and advocates â€“ already sharply divided over whether and how to restrict spending on campaigns â€“ must now also consider what to do about the potential influx of corporate spending that the Citizens United decision could unleash.

In 2008, Citizens United, a non-profit corporation, released Hillary: The Movie, a documentary film available on video-on-demand and promoted through advertisements. The Supreme Court described the movie as "a feature-length negative advertisement that urge[d] viewers to vote against Sen. Clinton for president."

This type of communication, known as an "independent expenditure," is not coordinated with a particular campaign, yet promotes opposition to or support of a candidate for political office. Citizens United sought to place the advertisements for the film within 30 days of the 2008 primary election, which was too close to the election under federal law. The group then brought a lawsuit against the Federal Election Commission, which regulates federal political spending, challenging that restriction.

In its decision, the Supreme Court found the ban on corporate independent expenditures enacted by Congress in the 2002 McCain-Feingold Act to be unconstitutional. The court's decision allows corporations, both for-profit and non-profit, to spend unlimited funds on campaigns if they do it independently of a candidate. The spending could come in the form of advertisements or mailings that seek to influence voters' decisions.

While the Supreme Court lifted limits on corporate political spending, it did say that disclosure of that spending is both permissible and beneficial because "disclosure permits citizens and shareholders to react to the speech of corporate entities in a proper way." This would allow Congress or any or all of the 50 states to require disclosure of independent corporate spending.

New York does not have any limits on independent expenditures, so the Citizens United decision does not require the state to change its laws. In general, New York state's contribution limits and other campaign finance laws allow more institutional money, such as corporate contributions, into the political system than is permitted at the federal level and requires little disclosure of such spending.

New York's contribution limits for state offices in New York are quite high for states nationally, and higher than at the federal level. Individual donors can give as much as $7,600 to candidates for state assembly, but only $4,600 to a presidential candidate. Candidates for governor can receive a maximum of $55,900 from individuals. Corporations in New York can donate $5,000 directly to candidates, but nothing bars a subsidiary from also contributing, making it fairly easy for large companies to bypass the limit by having several divisions donate. "Soft money" contributions to party committees and housekeeping accounts open another loophole. Individuals and corporations can give directly to these entities, which in turn give contributions to candidates. (See Campaign Finance Laws Fill Coffers for Cars, Coffee and Court.)

New York State law does not currently require the disclosure of the types of independent expenditures addressed by Citizens United. Corporations, both non-profit and for-profit, do not have to disclose any political spending to the state (though if they give money directly to candidates, the candidate would have to disclose in his or her contribution reports). Party committees, candidates and political action committees, or PACs, must file contribution and expenditure reports with the state Board of Elections, which are published online via the State Board of Elections website, but those filings don't cast light on the intent of the spending.

Unless ads by committees expressly advocate for or against a candidate, no disclosure is required. To avoid disclosure, committees develop what are known as "sham issue ads" that seek to influence voters about a particular candidate while not expressly advocating for the defeat or election of a candidate. Such an ad Yale Law School professor Heather Gerken has said, would urge voters to "call Senator X and tell her to stop being mean to puppies."

All of this then, means that under current New York law, there is no way to know how much money corporations and other groups that are not organized as political committees have spent independently on behalf of state candidates.

The past several weeks have provided what may be a preview of future state-level spending in the last week. The New Roosevelt Initiative announced that it would spend $250,000 on an independent expenditure campaign against Sen. Pedro Espada, who is the target of both a federal and state investigation into his non-profit, Soundview Health Clinic. The initiative has filed as a multi-candidate committee with the state Board of Elections. This means that while it is not coordinated with any particular campaign, it will be subject to the current reporting and disclosure requirements for committees, and so would have to disclose any of its expenditures that expressly seek to defeat Espada. "In our effort to make New York more responsive to the public, we didn’t want to shield our own spending," said the initiative's Doug Forand.

The initiative may well prove to be an exception, though. Other groups that seek to mount independent expenditure campaigns may not set up PACs or other committees and so would not have to disclose their activities. Even those that do file could avoid disclosure by using sham issue ads to sway voters.

While New York's current laws will not be affected by the Citizens United decision, other states' laws will be. This, in turn, could prompt more spending here from national advocacy groups that will no longer have to examine each of the 50 state's laws before making political expenditures at the state level, according to Ciara Torres-Spelliscy of the Brennan Center for Justice.

If national advocacy efforts in New York’s congressional contests are any indication of potential spending on state candidates, the state could become a kind of money magnet. Two of New York's congressional representatives were near the top in independent expenditures targeted both for and against them according to www.opensecrets.org of the Center for Responsive Politics. Rep. Scott Murphy of the 20th Congressional District attracted $2.6 million targeted (second only to President Barack Obama), with Rep. Bill Owens of the 23rd Congressional District having $1.9 million in such directed expenditures as of March 21.

While many see the Citizens United decision as likely to have a huge impact on campaigns, others believe that corporations are not likely to spend money on political ads since they will not want to get involved with hot-button issues or campaigns. Professor Sam Issacharoff of NYU Law School said at a recent Yale Law School breakfast on Citizens United that corporations are more comfortable spending money to affect the legislative and regulatory process -- lobbying -- than the electoral process and so are unlikely to make ads such as "Hillary: The Movie."

Isaacharoff also indicated that unions and other interest groups have dominated independent expenditures in the states. This has been, for example, the case in California, according to a June 2008 report by the California Fair Political Practices Commission, which regulates political spending in California.

At this point in New York, the only way to limit or require disclosure of a corporation's political spending is for its shareholders or members to convince leadership to change their practices. Trustees of public pension funds such as New York State Comptroller Thomas DiNapoli have taken this approach. DiNapoli filed a resolution filed a resolution that would require AIG shareholders to vote to ratify the company’s political spending program for the prior year as a way to disclose this spending.

Similar efforts have been made at the city level through New York City's Pension Funds. Comptroller John Liu and Public Advocate Bill de Blasio, who are among the funds' multiple trustees, have called for greater disclosure to shareholders. The funds have filed resolutions similar to the AIG measure with several companies, and AES Corp., Altria Group and Humana, Inc. have reportedly agreed to disclose political spending to shareholders.

State lawmakers have recently proposed ways to give shareholders a voice in political spending by corporations. Sen. Daniel Squadron and Assemblymember Rory Lancman have introduced legislation that would require for-profit and non-profit corporations making political contributions in New York to obtain prior shareholder approval and to annually disclose all such contributions to their shareholders and the secretary of state.

The State Senate also recently held two hearings on campaign finance reform, at which this legislation and other proposals were discussed, including legislationsponsored by Sen. Joseph Addabbo that would prohibit corporations and other entities with government contracts from making direct and indirect political expenditures. Another bill discussed at the hearings would require disclosure of expenditures made by trade associations, corporations and other entities to advocate support or defeat of a candidate. It would not, though, cover sham issue ads.

The new legal category of electioneering communications would cover sham issue ads that neglect to say vote for or against a candidate. The legislature's ethics bill vetoed by Gov. David Paterson earlier this year included a new definition of independent expenditures, though it would not have covered sham issue ads.