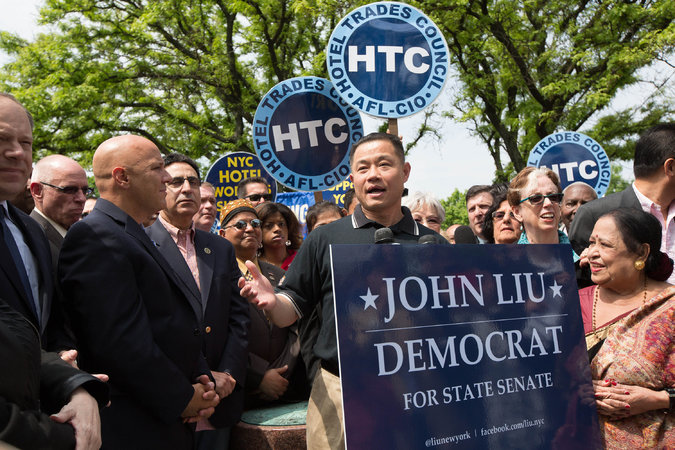 Queens voters may be appropriately impressed by the political portfolios of the two candidates squaring off in the Democratic Primary in the 11th State Senate District - incumbent Sen. Tony Avella and former Comptroller John Liu have taken similar career paths in lives dedicated to civil service.

However, several state legislators are somewhat less impressed and say they aren't exactly excited about working with either one.

A number of Senate Democrats want to see Avella punished because of his abrupt exit from the party's legislative conference. They have labeled him a complainer who relied on others to push his legislation.

Several say they aren't thrilled about the prospect of a Liu victory because of the potential baggage left over from the fundraising scandal linked to his recent mayoral campaign in New York City. Additionally, some say Liu is known to be a "personality" -- one with bigger things and higher offices in mind.

"Tony deserves to be taught a lesson," grumbled one Senate Democrat, who spoke on the condition of anonymity. "You don't just walk out on the leader without giving her a call. (And) honestly, I don't know how Liu fits in with the new issue-free conference. He has his own stuff to deal with."

In some ways the race is an embarrassment of riches for a Senate district that includes Bay Terrace, Willets Point, College Point, Little Neck and Fresh Meadows: Both candidates are former city council members and former mayoral candidates and both have served at the top of the city Democratic Party ranks.

Avella served eight years on the City Council before running for mayor in 2009. He lost to Bill Thompson in the primary, but then challenged and defeated incumbent Republican state Sen. Frank Padavan to join the Legislature.

Liu has taken a similar career path. He served on the City Council from 2002 to 2008 and in 2009 ran successfully for Comptroller. Last year, Liu ran in the Democratic Primary for Mayor as the most progressive candidate, but lost after being dogged by investigations into his campaign's fundraising practices, which included straw donors and their bundling. Liu was denied matching funds by the Campaign Finance Board, which he and others claimed crippled his campaign and led to Bill de Blasio's ability to avoid a run-off.

Both Avella and Liu are now looking to prove who is the better Democrat.

Avella wants to return to Albany after abandoning the Democratic Conference to caucus with the Independent Democratic Conference. His departure was abrupt and without warning, according to Senate Democrats, and left members there with a lot of bad feelings. Avella wants to demonstrate that he is both an effective Democrat and that his choice to join the IDC wasn't a cynical one.

One of those things was stopping the closure of three senior centers that were going to be shuttered because of a lack of funding, Avella said. His concerns about the centers were dismissed by Senate Democrats, but as a member of the IDC he was involved in budget discussions and was able to provide funding to the centers, he said.

However, only months after Avella split from the Democratic Conference, Gov. Andrew Cuomo was forced into a deal with the Working Families Party to help Democrats gain control of the Senate and pressure the IDC to cut a power-sharing deal with the conference they left.

The progressive surge that put de Blasio into the mayor's office seemed to have united voters, unions, and advocates in scorn of the IDC.

After much backroom haggling, de Blasio himself organized the IDC agreement to caucus with Senate Democrats next year.

In turn, he has endorsed Avella and the other IDC members. Now, though, Avella has to deal with advocates and voters who were not satisfied by the pledge for a power-sharing agreement and want retribution for his defection - as well as the popularity of John Liu.

Liu may be responsible for some of the progressive winds that filled de Blasio's sails as he cruised to victory last year. Liu's progressive policies were extremely popular with voters. Avella's decision to join the IDC gave Liu an opening into the Queens race as Avella's credentials as a progressive have been damaged in the eyes of many legislators, voters, and advocates.

Liu's greatest liability - the shadow of the investigation into his fundraising practices - is a companion to his greatest asset: his ability to raise small amounts of cash from a myriad of donors. "The reality of our campaign is that we always start with the grassroots donors. We don't call them small donors because they are significant donors. I'm proud of that," Liu told Gotham Gazette. Liu says that the amount of small donors to his campaign surprised him given that his campaign came together only three months ago.

Liu has made waves in Albany with his fundraising numbers where most campaigns have a few big real estate, union, and corporate donors that keep them afloat. Liu's campaign has $487,222 on hand according to 32-day pre-primary filings. Avella meanwhile has only $126,381 on hand according to his 32-day filing. Avella's numbers have increased lately and regular Cuomo donor Leonard Litwin gave the incumbent $20,000.

Avella has argued that Liu's coffers should be smaller given that his campaign for Comptroller still owes the city $525,000 in fines for illegally hanging flyers around the city. Liu's current campaign is not liable for the fine and he is in talks with the City about repaying the debt. "Think about how many firemen, how many police that could pay for," said Avella.

Over the years both men have developed a reputation for how they deal with their constituents and the kind of representatives they are. Liu is the big thinker who attracts constituents who want to work and campaign for him. As the first Asian-American elected to city-wide office, Liu serves as an inspiration to an entire community. His big-ticket items should he be elected include The Dream Act, The Women's Equality Agenda, and raising the minimum wage. Liu was ahead of the game when it comes to a number of these issues as he championed a progressive agenda during his time on the Council, and during his stint as Comptroller and his mayoral campaign.

"Its about drawing people into the process, first-time volunteers who want to make an impact. I bring a skill set that is not necessarily up there yet (in Albany)." Liu notes that he was treated as "crazy" for some of his positions on wage equality and workforce issues but now those positions are being carried by Democrats across the state.

"I'm gratified many points of my campaign last year have seen the light of day. Because it's not just about the candidate, but about the ideas." Liu says that if elected one of his personal quests will be to focus on restructuring the tax burden on businesses so that small businesses get a break while larger ones "pay their fair share."

While Liu is larger than life, Avella is the head down public servant. His first newsletter as a council member was a checklist where constituents could check off problems they have like potholes, cracks in the sidewalk, overgrown trees, and more. He sent out a similar mailer as his first official Senate newsletter. Avella has won the support of environmental groups including the New York League of Conservation Voters for his work on their issues and his steadfast stance against hydrofracking.

Avella has also waged a campaign to reduce noise pollution from aircraft in his district and has taken credit for the Port Authority's new community roundtable dedicated to addressing airplane noise over Queens.

"I always believed in a hands-on approach," Avella said. "I see every correspondence that goes in and out of this office. I see every single complaint so that I know that it is handled in the best way."

So how would each man interact with colleagues as part of the new Democratic/IDC coalition if everything goes as expected this November?

Avella said he hopes that the Senate Democrats elect more members who "are truly progressive." He blames "two Democrats" for voting to block the Dream Act and says they would also block campaign finance reform. By inference, he would appear to be referring to Sen. Ruben Diaz, who has actually been rather friendly with the IDC, and Sen. Simcha Felder, who caucuses with Republicans and who the IDC has worked with as part of its coalition.

Avella stresses that the IDC is not going to give up any power. "The deal is not that we go back, but that we will form a Democratic Majority Coalition that will be a mirror of the one that the IDC has with Republicans right now."

Liu said that while he thinks his ability to marshall the grassroots on issues like immigration and minimum wage will be an asset to the new coalition he also says he knows how to work as a member of a larger body. "I am proud to have the support of all the state senators whose support I have asked for," Liu said, noting that he didn't talk to upstate members because he doesn't know them. "I realize unlike my opponent that one Senator can't get anything done alone. You can't be a lone gun, you can't go it alone."

Both men acknowledge that on primary day winning and losing will come down to turnout - one that is expected to be particularly small. They've seen labor fairly split in endorsements between them and both say they are certain their loyal constituents will see them through. The two are expected to appear on Tuesday evening at a Bay Terrace candidates forum and on NY1's Inside City Hall on Wednesday night.