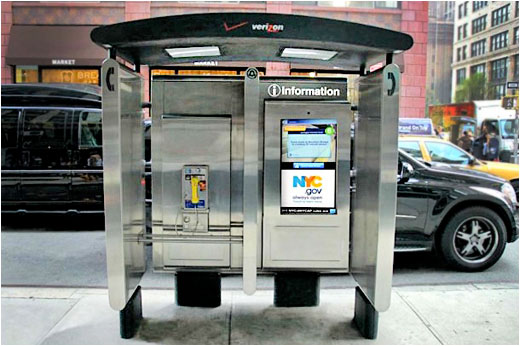 The idea of turning New York City payphones into Wi-Fi hotspots seems to be generally well received by the public, members of which look forward to more free Wi-Fi access in all five boroughs. But as the City gets closer to deciding which company will be awarded the franchise to provide that service, questions regarding the process are quietly beginning to bubble to the surface.

On August 13, Public Advocate Letitia James became the latest elected official to pen a letter to Mayor Bill de Blasio recommending he review the RFP process. City Council Member James Vacca, who chairs the council technology committee, submitted his own letter on August 1 and Council Member Mark Weprin submitted a letter signed by 24 of his fellow council members on July 29 (an additional four council members later signed on, bringing the total to 28).

These elected officials claim that by only picking one winning bidder for the franchise, the Department of Information Technology and Telecommunications (DoITT), the agency tasked with issuing the RFP and awarding the contract, is creating a telecommunications monopoly. DoITT argues it is not a monopoly because it is a non-exclusive contract. Companies can team up in their bid and the City has the right to add an additional franchisee at any point.

In addition, electeds claim that the de Blasio administration circumvented the Council by not going to them for a new authorizing resolution (AR), something required of all franchise agreements. DoITT has met this criteria by choosing to use two existing ARs instead of going to the Council for a new one. The electeds argue the existing ARs don't allow for monopolies, something DoITT claims is not being allowed.

"The de Blasio Administration is committed to equitably expanding access to free WiFi, and this RFP allows us to do so by inviting innovative proposals to replace largely unused, old payphone infrastructure with new public communications structures," Nicholas Sbordone, a spokesman for DoITT, said by email. "We look forward to our continued collaboration with the Council to expand free broadband to New Yorkers all across the five boroughs."

DoITT argues it is technically playing within the law, although it remains to be seen if its interpretation of the laws will hold up in court if they are sued by a non-winning bidder. The City took a calculated risk in choosing to use existing ARs. If the gamble fails, it could push the start date for this groundbreaking project months, possibly years down the road.

The two existing ARs used in the RFP are AR 2309 of 2009 which covers the payphone franchises and AR 191 of 2010 which cover wireless franchises. When the Council approves ARs, it approves them for five years. The payphone AR will expire on December 21 of this year.

This date is of significance because the City must select a winner, negotiate the contract, and get the Franchise and Concession Review Committee (FCRC) to sign off on the deal before Dec 21. If it doesn't, the contract will fail to meet the legal requirements of having an AR and be null and void.

At that point, the City would have to go back to the Council to get a new AR, which could be a time consuming process. That new ask would allow the Council opportunity to press for stronger language that would prevent just one winner from being selected. The City would open itself up to scrutiny over using the term "non-exclusive" in the AR: the elected officials who wrote the recent letters argue that selecting one winner breaks the "non-exclusive" clause. The Council could potentially tie up the AR for months over that term and its application.

There is no indication that the City won't meet the deadline, but legal action could make it a closer call than it hopes.

Weprin, who has been an outspoken critic of the potential for a monopoly resulting from this RFP, says the use of existing ARs should be examined because it was not the original intent of of those council members who signed the legislation.

"We gave enabling legislation before we knew it was going to be a monopoly and one company being selected," Weprin said in a recent phone interview. "We feel like now that they have gone down this route, they should come back to us again."

At the time the AR was voted on in 2009 there were more than 10 payphone service providers and no indication that the City would move to choose only one provider for the Wi-Fi overhaul. But with time still left on the AR, the City has the right to use it.

City officials defended their decision to use existing ARs, noting DoITT staff met with council staff in June 2013 and met with Council Members Weprin and Vacca prior to the release of the RFP in April 2014. At both meetings, the plan to use two existing ARs was brought up. Both Vacca and Weprin lent their support in the press release that was sent out when the RFP was issued on May 1.

The City is eyeing another deadline, too, although it has a little more wiggle room. On October 15, the current franchise agreement will run out. There is a holdover provision which will allow for companies who currently run payphones to keep them and continue operating them with no changes until a new franchisee has been selected.

Once a new franchise has been selected, the old companies can chose to remove their equipment or can sell to the winning bidder. The price is supposed to be negotiated, but some in the industry fear they will be forced to sell for pennies on the dollar and given no choice.

It doesn't appear the Council has much room for legislative recourse at this point, but that would certainly not prevent any backdoor lobbying to get the City to select more than one winning franchise. When asked about the letters her members sent to the mayor, Speaker Melissa Mark-Viverito, who did not sign on to Weprin's letter, said she was aware of the issue but had not had a formal conversation with anyone yet.

"Whatever concerns members have will be concerns I have as well," Mark-Viverito said at a recent press conference. "But we will look into that further."