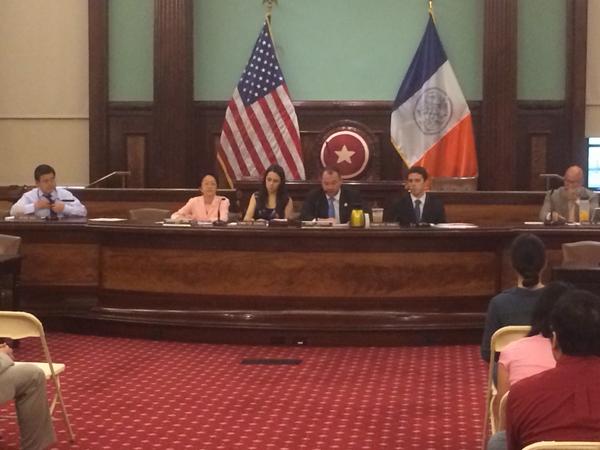 NEW YORK—As the number of State-funded social adult day care centers have climbed rapidly for nearly two years so have the complaints about them, including, most notably, allegations of Medicaid fraud. The New York City Council has waited patiently for the State to act, but council members' patience has finally run out.

On Thursday the Council held the first hearing on Intro 358, a bill which would regulate the centers by appointing an ombudsman to refer complaints to the State Department of Health and allow inspections to ensure state laws are being followed. As the bill is currently written, failure to comply would result in fines ranging from $250 to $500 per day.

The City's Department for the Aging (DFTA), which is responsible for the seven City-funded social adult day care facilities, would be responsible for enforcement of the new regulations, if they become law. During testimony on Thursday, Caryn Resnick, deputy commissioner for external affairs for DFTA, did not directly come out against the bill, but expressed the agency's belief that the issues at hand are out of its purview.

"It falls to the State to provide oversight for ensuring the quality of the services provided and to protect the integrity of the taxpayer-funded program," Resnick said during her testimony before the Council on Thursday.

She added that city agencies "lack the infrastructure and funding" to oversee the centers. The department estimated the new regulations would require eight full-time employees and cost roughly $2.6 million per year.

The Council is stepping in to help monitor a State-run program council members say has gone awry and is not only costing the state millions, but is putting vulnerable senior citizens at risk.

"The buck stops with us as a city to protect our residents, especially with an incredibly vulnerable population," said Council Member Corey Johnson, chair of the health committee, at Thursday's hearing. "I think waiting for the State to finally take full, comprehensive action is not good enough. We are seeing the ramifications of it in our individual districts across the city."

The number of social adult day care centers has skyrocketed from 40 in 2011 to nearly 200 now (no exact count can be given because there is no publicly available register). This drastic increase is due in large part to State Medicaid redesign. In an effort to draw down costs, people receiving Medicaid benefits get long-term care in residential or community settings, not in private facilities. Social day care centers fall under these terms with Medicaid paying the centers roughly $90 per senior per day.

There is no license, certification, or registration required by the State to operate these centers, although they are supposed to follow state regulations. With very limited oversight and a lucrative payday, centers have been popping up all over the city. A 2013 New York Times investigation found centers luring healthy seniors in with cash, metro cards, and in some cases, small appliances.

"They are offering toasters and field trips over appropriate care for people with Alzheimer's, dementia, and other significant disabilities," Johnson said following Thursday's hearing. "It is an outrage that it has taken this long for the State to act."

Following the article in the Times, a similar bill to Intro 358 was introduced to the Council, but the bill was shelved after the State promised to remedy the pop-up centers. Over a year later, council members maintain the complaints continue and say the State has not done enough.

"Patience is not a virtue where tax dollars are being wasted and the vulnerable are needlessly put at risk," Council Member Margaret Chin, chair of the Aging Committee said Thursday.

State Attorney General Eric Schneiderman has made some effort to curb rampant fraud at the centers. In November 2013 Schneiderman announced VNSNY Choice would have to repay $33.6 million in improper Medicaid billings linked to social adult day care centers. In August of this year he announced the arrest of four employees of the Northern Manor Adult Day Health Care Program due to improper services at the center.

Gotham Gazette contacted the New York State Department of Health (DOH) to find out what it has been doing to regulate social adult day care. The DOH would not issue an on-record comment, but did point to an audit that will be released soon: the DOH contracted with Island Peer Review Organization (IPRO) to perform a compliance audit. The results, which are complete and are currently being reviewed by DOH, are expected to be released within weeks according to Resnick, although the State DOH would not confirm a release date.

While the audit report could shed some light on issues at the centers, council members are ready to move forward with the legislation anyway.

"We want to move forward because once the report is out, what are you going to do with the report?" Council Member Chin said following the hearing. Gotham Gazette asked the State DOH what the plan would be following the release of the report, but no response was given before publication of this article.

Both Council Members Johnson and Chin believe the bill could pass committee within weeks and be eligible for a vote before the full Council. There are currently 15 sponsors on the bill.