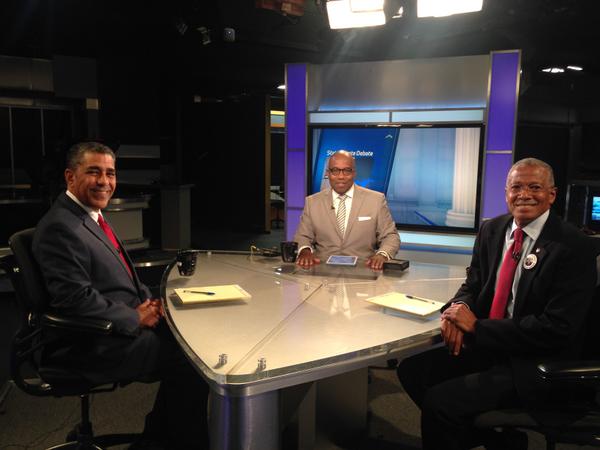 Just a few months after his second congressional loss, state Senator Adriano Espaillat is running for re-election to his Uptown Manhattan seat, but attendance issues stemming from his previous campaigns could come back to bite him when voters go to the polls for Tuesday's Democratic primary.

Espaillat challenged Rep. Charles Rangel in the Democratic primary in 2012 and again this June, both times falling short by a few percentage points.

Back in Albany next session, Espaillat hopes to chair the Senate housing committee, working on rent reform to prevent landlords from hiking rates.

"I will be an excellent leader at making sure that happens," he told Gotham Gazette. "I think I'm doing a good job and I should go back."

But first he must fend off an energetic challenge from former City Council Member Robert Jackson, a Rangel ally who's arguing that Espaillat's spotty attendance record shows he isn't committed.

Espaillat missed 891 votes in the 2013-2014 legislative session, most in the last two weeks just before his June congressional primary, according to an analysis by the New York Public Interest Research Group (NYPIRG). That means he wasn't present for 60% of votes – the worst attendance record of all senators. His record in 2012, when he was also campaigning for Congress, was the second-worst in the Senate.

Espaillat was absent for votes on bills legalizing medical marijuana and mandating more transparency at the Port Authority, as well as a package of bills fighting heroin addiction in the state. None of the votes he missed were close enough that he would have cast the deciding vote.

More bills should be taken up throughout the session, not just at the end, Espaillat said.

"The week before the election I was here in the city, and as a result I missed those votes," he said after attending a baseball game in Inwood on Sunday. "I'm not happy about that, but it is what it is. The rest of my record in regard to attendance has been stellar."

"It's up to the voters to decide whether it was worthwhile of his time to miss some of these important votes," said Bill Mahoney, a NYPIRG researcher. "A lot of it is necessitated by this bizarre system with two primaries," a federal primary in June and the state primary in September.

Espaillat said that last session, he passed more bills than most Democratic senators and introduced more bills than Jackson did during his entire city council career. Jackson said that was "bulls--t" because many state bills only pass one house of the Legislature and go nowhere.

During a televised debate on NY1 last Thursday, Jackson (who ran for Manhattan Borough President last year) repeatedly asked Espaillat whether he would run for Congress again in 2016, but Espaillat didn't answer.

"I think everybody knows he's running again in 2016, he just won't admit it," Jackson said on Friday, sitting on a fire hydrant in front of his 181st Street office.

Both candidates share common ground on a number of progressive issues. They support campaign finance reform, would vote for another Moreland commission to investigate corruption, want to raise the minimum wage, and promise to fight for tenants and parents.

There are a few policy disagreements. Espaillat points to Jackson's vote to extend term limits for Mayor Michael Bloomberg and city elected officials, which Jackson says his constituents supported. He also objects to Jackson's vote in favor of the Bloomberg-supported West Side Stadium.

Jackson opposes Espaillat's support for legislation enabling more charter schools in the state. He also attacked Espaillat's 1999 vote to end a tax on suburban commuters who work in the city, which Espaillat has since called a mistake.

Espaillat's campaign says he won more than 68% of the 2012 and 2014 congressional vote in his senate district and point out that his percentage of victory has increased over the years in his successful runs for the state Legislature.

The district is 56.3% Hispanic, according to Department of Justice statistics from the 2010 census. But Jackson said demographics won't be an obstacle for his campaign.

Espaillat has been backed for re-election by big-name state and city politicos, including Gov. Andrew Cuomo, Mayor Bill de Blasio, Public Advocate Tish James, and others. He also has the endorsement of SEIU 1199 and the United Federation of Teachers.

Jackson has been endorsed by Rangel and other political allies, as well as good government group Citizens Union, the Council of School Supervisors & Administrators, and ATU 1811, among others.

A third candidate, community center director Luis Tejada, is also running. While he got 13.4% of the vote in a local City Council race last year, Tejada hasn't raised any money in the Senate election, according to the latest state filing.

Both Espaillat and Jackson are sure to be making major last-minute pushes to get out the vote ahead of Tuesday's primary.

Uptown voters should be sure to check their polling place before voting, as some polling locations were changed last week.

***
Casey Tolan is a student at Columbia University. He has written for CNN.com, the New York Daily News, and the Columbia Daily Spectator.