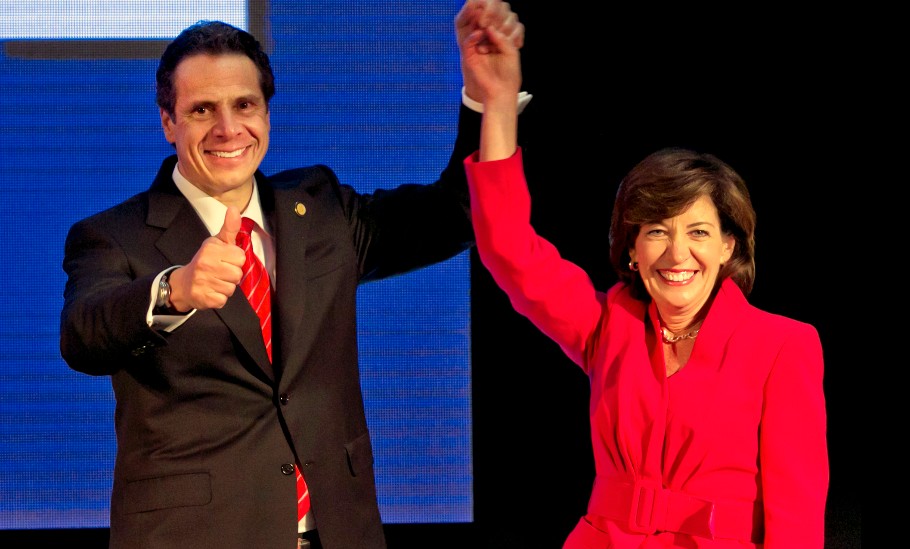 Primary night in New York's 2014 elections for state-level positions saw incumbent Gov. Andrew Cuomo fend off upstart challenger Zephyr Teachout for the Democratic nomination for governor and the governor's preferred lieutenant governor running mate, Kathy Hochul, defeat Teachout's running mate, Tim Wu. After what was a bruising campaign for the governor, who opted not to debate Teachout, Cuomo has about 62% of the vote to Teachout's 34% (the third Democratic candidate, Randy Credico, has about 3.5%) with 98% of precincts reporting - according to the Associated Press via WNYC. Hochul has about 60% of the vote to Wu's 40%.

While many will call the results troubling for Cuomo, he moves on to the general election against main rival Republican Rob Astorino, who did not face a primary. Cuomo and Hochul will now be linked on the ballot and appear on four lines together: the Democratic Party line, the Working Families Party line, the Independence Party line and the newly-created Women's Equality Party line.

In other spotlight primary contests to represent parts of New York City, incumbents were almost all safe. One major exception is indicted State Sen. Malcolm Smith,  who was handily defeated by former City Council Member Leroy Comrie in Queens (Comrie won about 70% of the vote). Independent Democratic Conference (IDC) members State Sens. Jeff Klein and Tony Avella appear to have defeated challengers Oliver Koppell and John Liu, respectively - though Liu has not conceded and wants every vote counted in a tight contest (which Avella leads by about 550 votes, 52-48% with about 95% of precincts reporting). Meanwhile, another indicted incumbent, State Sen. John Sampson of Brooklyn, was re-elected handily.

In other hotly contested primaries, including some for vacant seats or seats being vacated by officeholders not seeking re-election, the following are the results as of late Tuesday night, all in Democratic primaries:

-Incumbent State Sen. Toby Ann Stavisky has prevailed in the 16th Senate District with about 57% of the vote, defeating challenger S.J. Jung, who garned 43%.

-Rodneyse Bichotte has emerged in a crowded 42nd Assembly District field with about 50% of the vote.

-Jo Ann Simon has won the race in the 52nd Assembly District, garnering about 53% of the vote to 40% for Peter Sikora, her nearest competitor.

-Erik Dilan has held off Kimberly Council to win the primary in the 54th Assembly District by about 59-41%.

-In the 55th Assembly District, Latrice Walker has emerged from a crowded field with 40% of the vote. Lori Boozer finished second with about 22%.

-In the 60th Assembly District, Charles Barron is victorious and likely heading to Albany to replace his wife, Inez, who is now a city council member. Barron defeated Chris Banks by about 62-38%.

-Guillermo Linares has emerged from a crowded field in the 72nd Assembly District, earning about 45% of the vote. Manny De Los Santos is second with about 27%.

-Rebecca Seawright is the winner in the 76th Assembly District Democratic primary, with 45% of the vote - her closest competitor, Gus Christenson, has about 38%.

-Latoya Joyner has won the 77th Assembly District primary with about 70% of the vote.

-Michael Blake has won the 79th Assembly District primary with about 37% of the vote. His closest competitor, Marsha Michael, won 25% of the vote.

-86th Assembly District incumbent Victor Pichardo is in a too-close-to-call contest with Democratic primary challenger Hector Ramirez: with about 98% of precincts reporting, Ramirez leads by 11 votes.

Stay tuned to Gotham Gazette for further information and analysis on the 2014 New York State primaries and comprehensive coverage of the general election races - as of Wednesday, September 10, Election Day is just 55 days away.