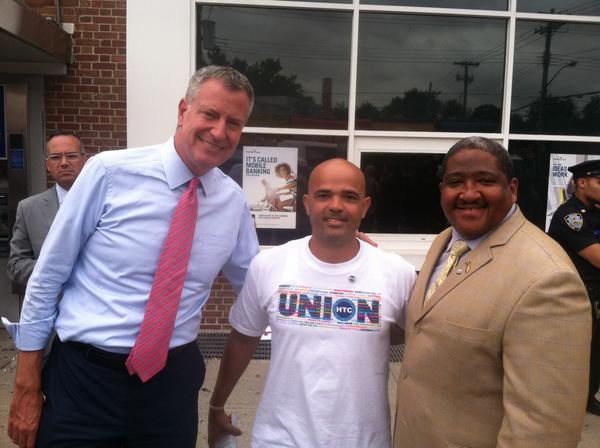 It was a long, hard night for many legislative campaigns watching primary results trickle in in their opponents' favor. For most New York City candidates a loss in the Democratic Primary means the end of the road, but for some options still remain thanks to the Working Families Party (WFP) ballot line.

Candidates such as Peter Sikora, who lost to Jo Anne Simon in Brooklyn's 52nd Assembly District, and Dell Smitherman, who fell to indicted incumbent Sen. John Sampson in Brooklyn's 19th Senate District, have the backing of the WFP and therefore its line on the November general election ballot.

(Both Sikora and Smitherman also happen to have the support of WFP darling Mayor Bill de Blasio, who campaigned for both leading up to the primary.)

It's early for the camps of Sikora, Smitherman and other WFP-endorsed candidates to make a decision on whether to continue their campaigns into the general, but the calculus could be there to give it a go in races where the field of candidates would be reduced.

Sampson won in a field with 3 other Democrats, taking 54 percent of the vote; Smitherman finished second with 30 percent and two other candidates totaled 16 percent. Simon won a three-way contest with 53 percent of the vote, with Sikora tallying 40 percent and a third candidate, Doug Biviano, who would not be appearing on the general ballot, taking 7 percent. Sikora is a long-time WFP activist with deep connections to the party. According to State Board of Elections documents the WFP spent $42,262 supporting Sikora - more than on any other candidate in the state. Coming in second was Smitherman who saw $19,143 in support from the party.

A groggy spokesman for Sikora told Gotham Gazette on Wednesday afternoon that the camp was still "taking things in" and expected to "sleep on it."

Candidates forging on would be expected to do so with the blessing of WFP leadership, of course.

Sources within the WFP indicated that at this point they don't expect any candidates who lost in the Democratic Primary with its backing to continue on in the general.

Other Democrats with the WFP endorsement who lost in Tuesday's primaries include 45th AD candidate Kimberly Council, 55th AD candidate Lori Boozer, and 18th Senate District candidate Debbie Medina. Calls to these candidates were not returned in time for publication.

It has been an odd year for the influential labor-backed party as the WFP organized to field candidates to take on Gov. Andrew Cuomo as well as members of the Independent Democratic Conference, or IDC, even grooming Zephyr Teachout to challenge Cuomo before eventually deciding to back incumbents Cuomo and Sens. Jeff Klein and Tony Avella. Both John Liu and Oliver Koppell were initially endorsed by the WFP at its convention in their bids to defeat Avella and Klein, respectively. But, the WFP later revoked its backing when the IDC bowed to pressure from de Blasio and unions to agree to plan a power-sharing agreement with Senate Democrats.

The WFP did successfully back a number of winning candidates including Leroy Comrie who defeated indicted Sen. Malcolm Smith in the 14th Senate District, Sen. Gustavo Rivera who fended off a challenge from Councilman Fernando Cabrera, as well as Cuomo and his choice for lieutenant governor, Kathy Hochul.

The WFP's Bill Lipton admitted not every candidate was successful in a fundraising email to supporters. "Not every State Senate race went the way we had hoped. Some outstanding advocates for working families, like Dell Smitherman, ran terrific campaigns but unfortunately ended the evening coming up short," Lipton said in the email, which gave no mention of candidates pursuing general election campaigns.