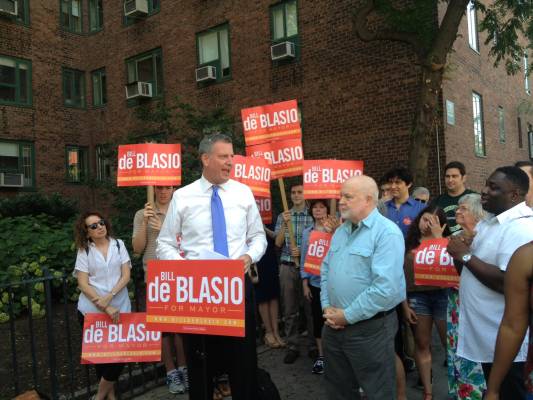 When Mayor Bill de Blasio declared early in his tenure that he would like to see the City regain control of its rent laws from the State many insiders laughed. "Why would we let that go?" asked one legislator. "Control is worth more than one election cycle."

What exactly is it worth to state legislators? According to a New York Public Interest Research Group (NYPIRG) study of campaign donations during the last state-level campaign cycle of 2011-2012, real estate and construction interests gave $7,523,955 to legislators and were the top donors of any business sector to each legislative conference.

Further, tenant advocates say the debate over whether to give control of rent regulation back to the City could serve as a distraction to the policy issues at play. Michael McKee, treasurer of Tenants PAC, said the focus should be on repealing vacancy decontrol - a process by which landlords can take apartments off the rent-regulated rolls by making drastic improvements to the apartments and hiking up rents. "This [giving the city control over rent laws] is just one issue among many," said McKee. "It cannot be the sole issue."

McKee points out that despite years of work raising money and campaigning for Senate Democrats tenant advocates have grown accustomed to Democratic Senators voting against their issues. McKee says that the real estate lobby's strategy is clear: "Approach upstate Democrats who don't care one way or another and get them to vote their way for huge contributions."

Despite de Blasio and his fellow city progressives' rise to prominence, it is unsurprising given historical and monetary trends that The Daily News reported on Monday that Senate Democrats are non-committal on the issue of returning rent control to the City. Senate Democratic Leader Andrea Stewart-Cousins was non-committal in a statement issued to The Daily News. There is little incentive for senators who do not represent the city to support the measure. However, a number of progressive upstate Democrats including Sens. Neil Breslin and Cecelia Tkaczyk do generally support tenants' issues and might be counted on to vote for city home rule.

The Urstadt Law of 1971 took away the city's ability to set its own rent control guidelines and put it in the hands of the Legislature. The law did not face great opposition at the time as the city was going through a major financial downturn, but it has given Albany monumental say over the city's housing policy and become the ire of many city legislators and advocates. It allows Albany to set policy on which housing stock is kept at affordable rates, what is affordable and when landlords can remove apartments from rent control.

The New York City-based real estate industry does not discriminate by locality or party affiliation when it comes to donations - some of the biggest beneficiaries of its largesse are upstate legislators who have no constituency involved in the fight over the city's rent laws. In the 2011-2012 cycle, Republican Sen. Greg Ball from Westchester and Democratic Sen. Tim Kennedy from Buffalo received more campaign money from the real estate lobby than any other sitting legislators. Each took in nearly $200,000 in real estate cash. Ball is not seeking re-election this year, but Kennedy is. Kennedy was involved in a heated Democratic primary where The Buffalo News identified at least $100,000 worth of donations from NYC-based real estate interests.

Other real estate industry favorites include Republican Sen. Martin Golden of Brooklyn and the head of the Independent Democratic Conference, Sen. Jeff Klein of the Bronx.

McKee recalls raising cash and campaigning for former Democratic Sen. Darrel Aubertine who ran and won in a 2008 special election in a district that covers northern and central parts of the state. Tenants PAC members went door-to-door for days as it snowed, but when it came time to vote on housing, McKee says Aubertine betrayed them.

De Blasio has been intimately involved in helping Democrats reclaim the Senate this year as well as expending major political capital to help Gov. Andrew Cuomo and running mate Kathy Hochul fend off surprisingly effective challenges in the Democratic primary from Zephyr Teachout and Tim Wu, respectively. Some wonder if de Blasio expects Urstadt repeal as payback for his work, but others expect the mayor understands what a heavy lift repeal would be. "He is positioning himself to get a better outcome with the rent laws up for renewal," speculated one Democratic legislator who asked not to be identified. "He can't expect full repeal." The state's laws governing city rents are set to expire next year, which is triggering another round of back-and-forths between tenant groups and the real estate industry.

Some insiders say they've seen movement that indicates real estate interests are acting to ensure that the IDC/Republican Senate governing coalition stays intact. They expect the group to work to "peel off" certain conservative Democratic legislators to have them support the IDC, or at least keep them committed to preventing major changes to the rent laws.

"The joke around Tenants PAC used to be that we would support a Democratic fire hydrant," said McKee. "Not anymore. We've been betrayed too many times."

However, Tenants PAC has maxed out its donations to upstate Democratic Sen. Cecelia Tkaczyk and plans to do the same with Democratic Sens. Terry Gipson and Ted O'Brien.

Defeating Klein was a priority for Tenants PAC this year because members believe him to be beholden to the real estate industry. During a NY1 debate with his primary opponent, former City Council Member Oliver Koppell, Klein refused to commit to supporting full Urstadt repeal. "Again, I will weigh every issue as [it comes]," said Klein. "I support rent stabilization, I support everything that protects tenants. I think we need to take a good hard look at the MCI [Major Capital Improvements] law. There's a lot of things that are out there."

In an interview the day after his primary loss, Koppell was skeptical that Klein will enact tenant-friendly legislation. "I don't think he is going to go along with repeal," said Koppell. "I asked him that in the debate and he wouldn't answer. I think that is a pretty good sign of his intentions."

De Blasio appears to be banking that the political capital he spent supporting Klein and Cuomo in the primaries will be paid back on a number of issues next session. De Blasio had help from Klein last session when the pair worked together to secure pre-kindergarten funding for the city and de Blasio and Cuomo have appeared much more aligned of late than they did when at odds over where pre-k funding would come from and what the future of the city's charter school sector would look like.

Some advocates and legislators insist returning control of the rent laws to the City is not that far-fetched. Mayor Michael Bloomberg managed to make home rule of city schools the signature of his administration and some advocates think de Blasio can do that with housing. City Council Member Jumaane Williams, chair of the council's housing committee, issued a Monday statement pressing legislators on Urstadt repeal after the report surfaced that Senate Democrats weren't fully on board with the idea.

"I am disappointed to hear that some of our NYC Democratic leaders in Albany are less than enthusiastic toward Mayor Bill de Blasio's call to repeal Urstadt," Williams writes. "It is my hope that Albany's resistance is just pre-election angst that will subside after November, because New Yorkers need for real affordable housing is great and immediate."

Williams said that the city has seen rents increase for five decades: "It is a shame that our state legislators have not done more to end this crisis. Urstadt has prevented New York City from strengthening rent regulation laws that are meant to protect the nearly 2.5 million tenants who live in rent-stabilized or rent-controlled apartments."

In the end controlling rent regulations does not just mean campaign cash for the legislators - it also means having a gigantic bargaining chip to use in negotiations on other issues. Rent laws are likely to be just another piece of negotiations in a year when several large pieces of progressive legislation like The Dream Act and campaign finance reform are supposed to come to a vote in both houses. Legislators expect that Cuomo, who has deep ties to the real estate industry himself, will leverage progress on other issues to keep rent laws under Albany's control.

McKee of Tenants PAC says the issue will be "a test" for Cuomo, Senate Democratic leader Andrea Stewart-Cousins and Democratic Sen. Mike Gianaris. To those on his side of the push, McKee asks, "What are you going to do to get these legislators on board?"