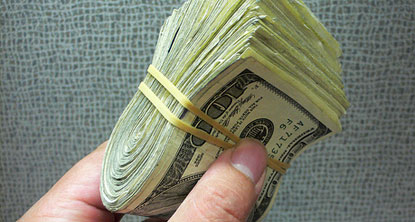 Open up your checkbooks, the New York City Campaign Finance Board wants a look inside.

The Campaign Finance Board will seek a major change in city campaign law to vastly increase the disclosure of spending on behalf of candidates. The move is aimed at so-called independent expenditures -- those made on behalf of a candidate but done without the candidate's consultation or approval. For now, these expenditures largely remain under the radar.

The push follows a Supreme Court ruling that lifted a ban on independent campaign spending by corporations. It also comes as the Manhattan district attorney investigates money funneled from the Independence Party last fall to a poll worker operation run by a campaign advisor to Mayor Michael Bloomberg.

The Campaign Finance Board is initially taking its proposal, which would likely apply to money spent by corporations, unions and other political action committees, to the City Charter Revision Commission. Board officials are expected to testify on the matter later this month, and the issue will be one subject in the board's post-election report due out this fall.

"There is a gap in disclosure," said Eric Friedman, the director of external affairs at the Campaign Finance Board. "If the mailing shows up, no matter who it is that put it out there, we would say the voters in their district should know where it came from."

The idea has sparked outrage and was called "illegal" in some political circles. Some union officials and the Bloomberg administration have expressed interest in it, while Public Advocate Bill de Blasio has introduced his own bill to require similar disclosure.

The issue of disclosing independent expenditures is an allusive one.

In a nutshell, an independent expenditure is money spent by an individual, corporation, union or political action committee to support or oppose a candidate or ballot proposal. It can come in your mail, as an ad in a newspaper, in the form of canvassers on your corner or any other campaign-boosting element. Above all, it must be done without the consent of the candidate.

Friedman said it is impossible to estimate how much of this type of spending occurred during the 2009 elections, because it isn't disclosed.

But that doesn't mean it can't swing elections. Take the 2005 Manhattan borough president race. The Working Families Party inundated Manhattan with mailers championing then-candidate Scott Stringer days before the primary. One of his opponents, Eva Moskowitz, filed a complaint with the Campaign Finance Board arguing the mailers put Stringer over the city spending limit. The board eventually determined the Working Families Party conducted the mailing independently.

In 2009, the Independence Party sent mailers out in a handful of City Council races, characterizing its favored candidates as for "workers' rights." (Note: the Working Families Party did not endorse these candidates, who included former Councilmember Kendall Stewart and Queens candidate Deirdre Feerick, both of whom lost.) The Independence Party also sent mailers out for Councilmember Karen Koslowitz.

Between July and January of 2009, according to the State Board of Elections, the Independence Party spent more than $60,000 on direct mailings statewide. A more detailed breakdown of how much each mailing cost per race was not filed with the board.

When Gotham Gazette asked a representative of the Working Families Party whether it would support disclosing these expenditures to the Campaign Finance Board, he said it wouldn't change the party's practices much since they already file regularly with the State Board of Elections. Independence Party Chairman Frank MacKay said, "If it becomes a reality, we'll follow the rule to the letter of the law."

In a letter to the City Charter Revision Commission dated May 4, Campaign Finance Board Executive Director Amy Loprest wrote, "During the 2009 elections, several primary elections became high-profile contests between opposing independent expenditure efforts funded by labor unions and the real estate industry. Yet neither state nor city law required these special interests to disclose information about their expenditures on behalf of candidates in the 2009 elections."

"Candidates join the [campaign finance] system to abide by spending limits," said Friedman. "If one of those candidates is receiving help from the outside, that is something that can affect the balance."

But by far, the largest target of the proposal would be corporate spending on campaigns, which is not currently disclosed to either the state or city.

A bill introduced in April by de Blasio would also target this spending. According to the legislation, any corporation, limited liability company, limited liability partnership or partnership would have to disclose what they spend to support or oppose candidates. While the bill doesn't expressly say unions, a spokesman for the public advocate said they would be covered under the proposal.

"[The recent Supreme Court decision] has amplified the power of our country's already powerful corporations by giving them the freedom to spend without limit or restraint in our elections," said de Blasio in an emailed statement. "The legislation I have introduced would require full transparency around all political spending. This level of disclosure will provide critical protections for shareholders, consumers and all citizens."

Trying to Regulate the Abyss

Some unions say they choose not to make independent expenditures under the current system because they have to prove to the Campaign Finance Board the spending was not done in coordination with the candidate.

Kevin Finnegan, the political director for 1199 SEIU, one of the city's most powerful unions, said it didn't spend anything on any candidate's behalf during the city elections last year, despite the fact that its political action committee spent more than $2.2 million in 2009, according to the State Board of Elections. Much of that money went to campaign contributions to individual candidates across the state, according to state filings.

Should the Campaign Finance Board step in and regulate independent expenditures, it could lead to more scrutiny of unions, like 1199, during the campaign season, said insiders. Petition drives, get-out-the-vote-operations or internal member mailings could all end up being interpreted as independent expenditures if they benefit a candidate, insiders said.

"Labor unions are probably getting away with murder, providing bodies that could be classified as independent expenditures," said political consultant Hank Sheinkopf, who was on the mayor's campaign staff last year.

It's for this reason some union officials are skeptical of the Campaign Finance Board's proposal and have expressed concern that the board could attempt to regulate its member operations.

"We don't object to disclosing expenditures and making it public," said Finnegan of 1199. But there is a caveat: "We go ahead and practice our constitutionally protected right of free speech."

Some critics are already calling the proposal unconstitutional and predict it will go down in flames.

"The Supreme Court has said that individuals want to spend as much as they want. I don’t think that in any way a government entity can require an individual to make that kind of disclosure," said elections attorney Henry Berger. "If they try to exercise it, we're going to be in court for years."

While the U.S. Supreme Court did say a ban on corporate spending was against the First Amendment, it also said the government could require disclosure. Other cities already require this type of reporting, including Los Angeles, Portland and Seattle. About 40 states also mandate it.

Requiring disclosure here in the five boroughs, said Dick Dadey, the executive director of Citizens Union, the sister organization of Gotham Gazette's publisher, should be widely accepted. "Political money seeps in wherever there is a hole, and this is a big hole in our city campaign finance system," said Dadey.

This type of disclosure, union officials and party representatives said, could spur unions to spend more on campaigns. One official at the New York Hotel and Motel Trades Council said by forcing full disclosure, unions could spend freely out in the open without fear of repercussion from the Campaign Finance Board.

That prediction has resonated.

"It will legitimize what some consider a growing series of activities that need to be looked at," said Sheinkopf. "If you regulate it, then it will increase, then it will be good for everyone."