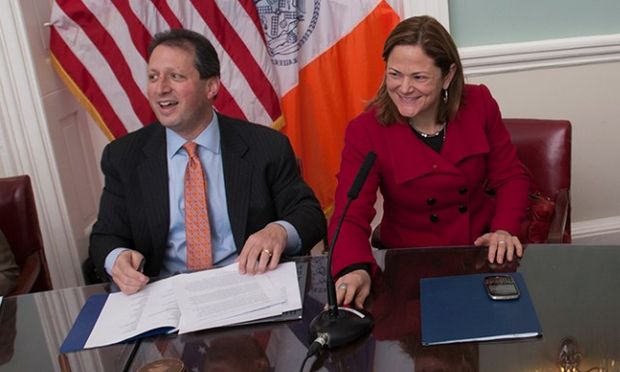 The New York City Council has taken charge of filling vacancies on the City Board of Elections (BOE) through what it is promising will be a transparent process involving public hearings and analysis of reform recommendations.

After County Democratic leaders missed deadlines to nominate appointees to three seats on the ten-seat BOE, the City Council has taken up the task, as it is legally allowed to do. On Wednesday afternoon, the Council Committee on Rules, Privileges and Elections, headed by Council Member Brad Lander, will shed light on what has so far been a closed-door procedure and hold a public hearing where Democratic candidates for the Bronx, New York and Kings County seats will be evaluated.

Last year, Republicans on the Council set the appointment precedent by naming commissioners to Kings (Brooklyn) and Queens seats, but Wednesday's public hearing is the first of its kind. "These reforms show how serious the Council is about fair elections, and will help bring long overdue changes to the BOE," Lander said in a statement.

The Board of Elections is a bi-partisan body comprised of ten commissioners, two from each borough as (traditionally) selected by county leaders of the two major political parties. Each BOE member serves a renewable four-year tenure. The Board undertakes the administration of elections in the city and its duties include voter registration, maintenance of voter records, processing candidate applications and campaign finance disclosures. The board's employees also recruit and train electoral officers, operate polling machinery, and disseminate election data.

A key part of the rules committee's agenda on Wednesday will be asking the three candidates to review the City Department of Investigation (DOI) 2013 report which recommended sweeping reforms at the BOE and charged it with nepotism and inefficiency.

After the DOI report was released in December last year, it caused much friction between the DOI and the BOE. The DOI faulted the election body for being uncooperative with its investigation and unwilling to address systemic problems. The BOE's new executive director, Michael Ryan, responded in a 20-page letter by calling the report vague and unsubstantiated, and even questioning the undercover methods used by the investigators. Most reforms suggested in the report, he stated, were out of DOI purview as they fall under matters of state law.

Since then, the BOE has taken reform steps by enacting administrative changes to improve general functioning and the running of elections. This includes eliminating hard-copy voter registration cards and stopping the unnecessary storage and review of these cards. However, BOE has not reformed employment practices, one of the bigger issues raised by the DOI and civic watchdogs.

Keeping in mind these limited changes, good government advocates are giving mixed reviews on the Council's initial attempt at transparency in the BOE appointment process.

"We're encouraged that there is going to be a public and open hearing," said Neal Rosenstein, government reform coordinator for the New York Public Interest Research Group (NYPIRG). "We've never had that happen before. Many civic groups have been happy with the positive measures that the board has taken in the last year but there's room for more."

Kate Doran, elections specialist at the League of Women Voters was more skeptical about the committee's openness. "I don't think the Council have been very transparent about picking these candidates," she said. "They're only putting up one candidate for each seat and we're curious as to how they narrowed it down," Doran added. She also said that though the hearing will have open public testimony, advocacy groups were not invited to testify as has been done in the past.

The three potential appointees, whose resumes were made public by the rules committee, are Bianka Perez, a Bronx-based attorney and administrative law judge; Alan Schulkin, deputy chief clerk at the Manhattan Board of Elections; and John Flateau, a professor at Medgar Evers College, CUNY.

Director of Public Policy at Citizens Union, Rachael Fauss, was optimistic about the Council's efforts. "The Council is doing the right thing," Fauss said. "The old process of parties appointing commissioners is completely closed. The fact that any member of the public can speak at the hearing goes further than other hearings where we were specifically invited to speak."