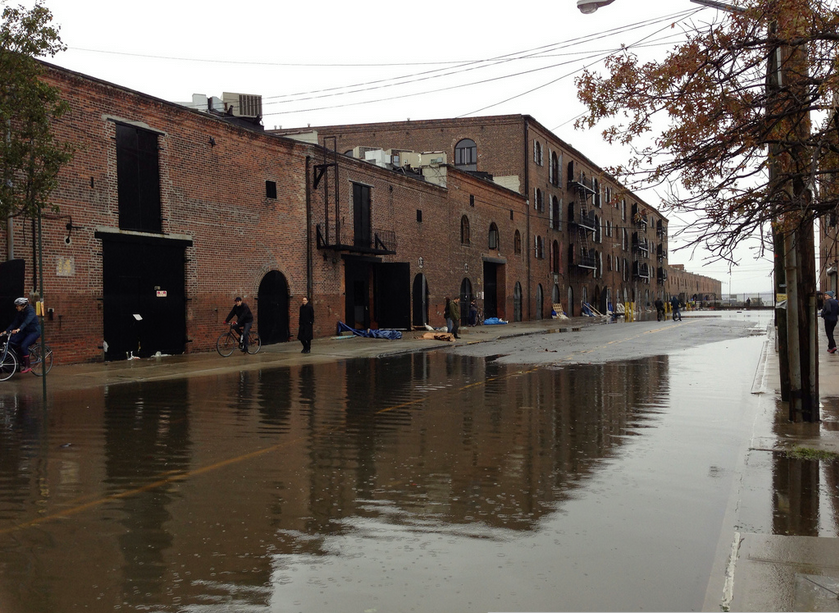 TAKE THE SURVEY
Do you feel climate safe?

Our September 30 introduction to the project:

Streets and buildings flooded, power out, trains down, lives disrupted and taken. No, we're not talking about the effects of Superstorm Sandy two years ago. We're talking about New York's future, with the kind of extreme weather experts warn could hit the city in the years ahead.

Given the forecasts and the lessons of Sandy's massive impact, do residents in some of the most climate-vulnerable New York neighborhoods think they're any safer than when Sandy hit? Has the City made progress in fostering a more climate-safe New York?

To find out, we and a group of partners are launching a multi-faceted special project this week.

First, on Thursday morning, we plan to send teams of journalists to report in real time from two of New York's highest-risk neighborhoods - Red Hook in Brooklyn and the Lower East Side of Manhattan. Both communities were slammed during Sandy and are now bracing for more.

At the same time, we plan to launch a crowdsourcing initiative that will be asking all of you the same question: Do you believe you're safer?

The project is a joint reporting initiative between Gotham Gazette and AdaptNY, which covers how the city is adapting to climate risk, along with the independent non-profit environmental news outlet NY Environment Report, and more than 30 reporters from the CUNY Graduate School of Journalism.

It's not the first time Gotham Gazette and AdaptNY have joined forces. Last year, we partnered on an investigative report highlighting the disconnect between the city's planners and some of its most vulnerable communities in the planning for greater climate resilience.

What's at risk for Red Hook, Lower East Side
Red Hook, home to Brooklyn's largest public housing complex and a mixture of businesses and industry, was inundated when Sandy hit, causing severe infrastructure damage and affecting thousands of residents. Many remained without power, heat, or running water for weeks. Because of its low-lying geography and climate-induced sea-level rise, Red Hook remains increasingly vulnerable to coastal flooding.

The Lower East Side (LES) also felt Sandy's force, with more residential units affected there than in the rest of Manhattan combined. Many LES residents lived without power or access to basic utilities for four days after the storm, some for much longer. The area was also at Sandy's epicenter in another way, when nearly half of the two million New Yorkers who experienced outages in the hurricane's wake were left in the dark by the explosion of a ConEd substation on 14th Street.

Both neighborhoods remain similarly at risk for future flooding. So much so that the city plans a massive project to shore up a low-lying ring around southern Manhattan with 10 miles of dual-use parks, berms and protections - a $335 million plan known as the Big U.

Tell Us What You Think About Climate Safety
We're launching a two-pronged interactive effort to hear from New Yorkers directly.

Find out what residents and others in these communities think about their climate safety, especially relative to two years ago when Sandy hit. Track our live coverage from Red Hook and the Lower East Side on Thursday morning beginning at 10 a.m. EST.

We've also opened specific Facebook pages to foster more conversation. Join in on Red Hook - Are You Climate Safe? or Lower East Side - Are you Climate Safe?.

Second, beginning Thursday, we will invite you to take part in a crowdsourcing project that will run for two weeks following the live event, through Oct. 17. You can take a quick survey about climate safety in New York. And you can help create a mosaic of community sentiment about climate safety by sharing comments, photos, videos or soundbites. Stay tuned for more information.

Our special project will culminate during the week of Oct. 20 with a major overview to address the central question: Are we safer? That analysis will make extensive use of your contributions from our live reporting and the crowdsourcing projects and look into what progress the City has made with its own climate resiliency planning process, particularly for these vulnerable communities.

So, sign up now on the live event pages - Red Hook and/or Lower East Side - for email reminders of the coverage launch. And watch for news about our survey and news developments in the coming days.