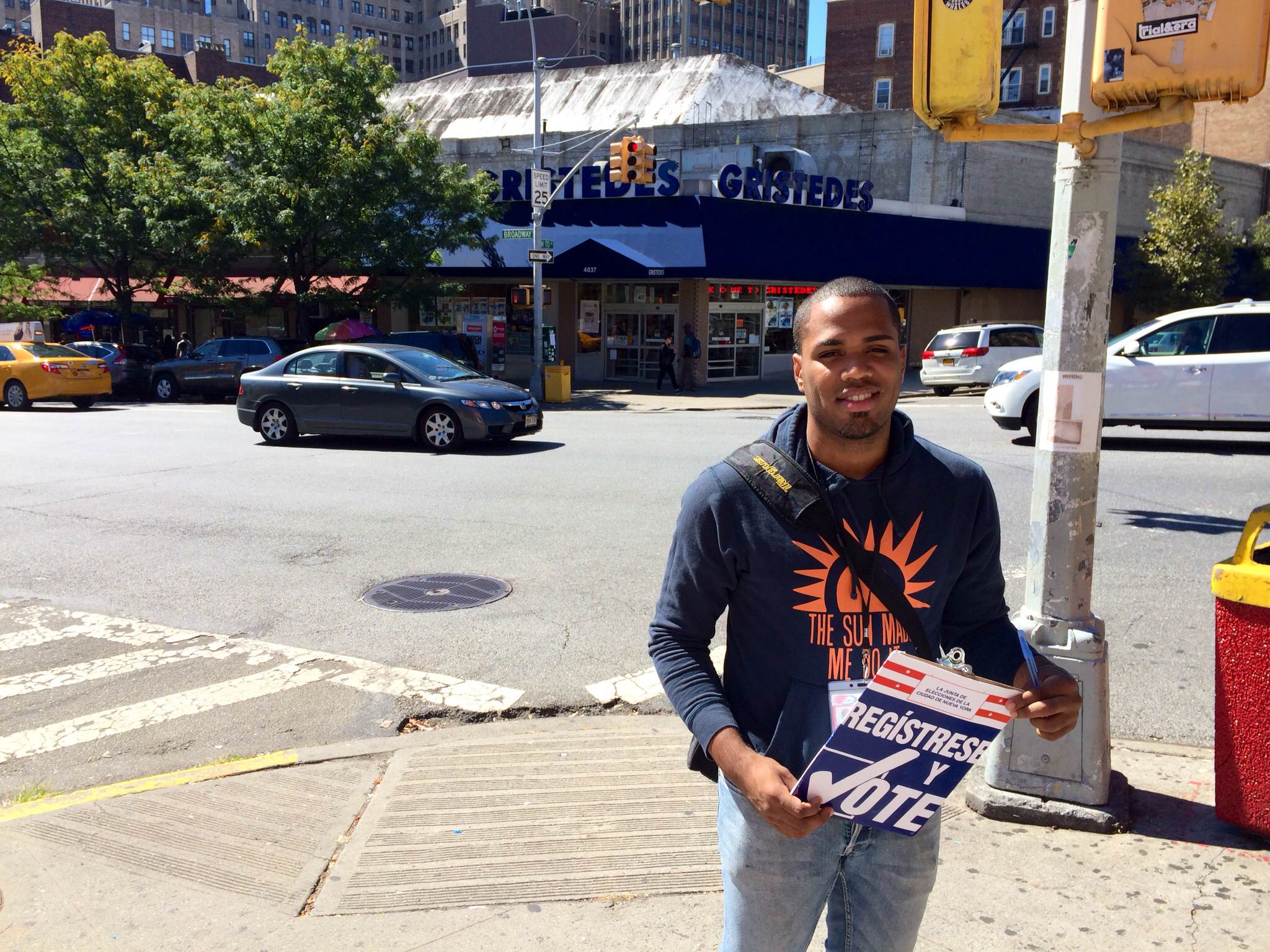 Joel Pena stood on the corner of 181st Street and St. Nicholas Avenue last week, trying to catch the attention of the people passing by. He competed with vendors hawking religious texts, ice cream, and coupons.

But Pena was offering something else: the chance to vote.

Pena was one of about a dozen canvassers hitting the streets last Tuesday, National Voter Registration day, for Dominicanos USA, an organization focused on increasing Dominican participation in elections.

The group says they've registered over 40,000 voters in New York and Rhode Island, two states home to the highest percentages of Dominicans in the country, since they started operations a year ago. Despite recent losses by Dominican candidates, the voter registration effort will keep going until at least 2016 — a boost for future candidates from the community.

"We're growing rapidly, but we're not civically engaged," Grullon said of Dominicans in New York. "People want to be part of the democratic process, but they can't."

The effort, which is bankrolled by Dominican businesses groups, is targeted in heavily Dominican neighborhoods in upper Manhattan and the Bronx.

First, canvassers register new voters by talking to people on the street and going door-to-door. Then, during elections, they make phone calls, knock on doors, and offer free rides to encourage the newly registered voters to get to the polls.

"When you get one, it makes you feel so good," Pena said of new registrations. "Like you're making a difference."

Despite the new voters, recent Dominican candidates haven't fared so well. Adriano Espaillat, a state senator in uptown Manhattan, lost his second straight Congressional primary in June (although he was re-elected earlier this month). Angel Taveras, the mayor of Providence, lost the Democratic gubernatorial primary in Rhode Island a few weeks ago.

But Dominicanos USA staff stress that their organization is non-partisan and is not supporting any specific candidates.

"The notion that by virtue of being a Dominican candidate you're guaranteed the Dominican vote — as we've seen in recent elections — is a false one," said Manny Matos, a board member at the group.

And the Dominicanos USA canvassers out on the streets on Tuesday didn't just stop Dominicans — they will offer to register anyone, no matter their ethnicity.

Adrian Pantoja, a professor at Pitzer College who has studied Dominican turnout in New York, said he thought the Dominicanos USA effort had the elements for success.

"What we find in field experiment research is that Latinos respond positively to messengers and messages that are Latino, that speak Spanish, that are targeted to their culture," Pantoja said. "If a fellow Dominican comes to their door and knocks on their door and says, 'This is why I vote, and this is why you should vote,' that's going to boost turnout."

Canvassers say they appreciate making an impact in the community, which has had historically low voter turnout.

"My parents weren't citizens," said Pena, who was born in Santo Domingo. "How could they teach me to do something they couldn't do themselves?"

It's not just about voting, though. "We're interested in anything that facilitates a quicker integration into American society for Dominican immigrants," Matos said. The group plans to encourage Dominicans to join community organizations, like school boards or PTA associations.

The effort is backed financially by Dominican business groups, including Grupo Vicini, a conglomerate run by one of the richest families in the Dominican Republic — a sign of how important U.S. politics involving the diaspora is back in the D.R. The group has faced questions about exploitation of Haitian workers.

On Tuesday, newly-registered voters said they were excited to get to the polls.

Wanda Perez, a Washington Heights resident who signed up with a Dominicanos USA canvasser because her registration had been missing in past elections, said she was looking forward to casting a vote for Hillary Clinton.

"I need to have my registration straight if she's running," Perez said. "She's my woman."