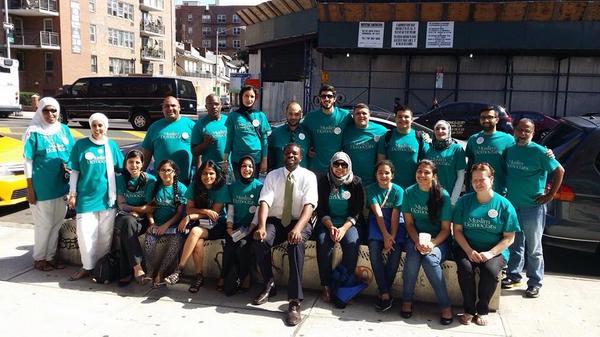 Members of the Muslim Democratic Club of NYC (photo: @LindaSarsour)

For Muslims around the world, the Eid al-Adha holiday means gifts for children and the poor, delectable food, and family gatherings.

That holds true for New York City's large Muslim population. But the celebration of the Biblical figure Abraham's willingness to sacrifice his son has also become politically significant.

Since 2006, a coalition of labor, faith, and community groups has organized to ask the New York City Department of Education (DOE) to close schools for two Muslim holidays: Eid al-Adha, celebrated this year October 4-6, and Eid al-Fitr, which marks the end of the holy month of Ramadan. Muslim parents and children say it is unfair to have to choose between going to school and celebrating a holy day.

For years, despite overwhelming support from the New York City Council, the Bloomberg administration rejected the request. Former Mayor Michael Bloomberg said that children should not have more time off from school.

But Mayor Bill de Blasio has repeatedly pledged to close public schools for those two holidays. Advocates for recognition of the holidays say that it's all but a done deal, and that they are talking with the DOE about how to make the change. Muslim leaders are buoyed by a mayor they say is more willing to listen to their concerns. Neither the DOE nor the mayor's office returned requests for comment for this story.

"He's trying to come in as very much the people's mayor, so that means he has to be the mayor of all of the people of New York City," said Moustafa Bayoumi, an author and academic who has reported extensively on Muslims in New York. "De Blasio has made an effort to court Muslim voters and that speaks to the growing power of the Muslim community's political voice."

The estimated number of Muslims in the city ranges from 600,000 - as a 2004 Columbia University study said - to 1,000,000, a number cited by Muslim activists. A 2008 Columbia Teacher's College study estimated that there were 100,000 Muslim public school students, about 1 in 10 of the overall student population.

Muslim leaders say that the campaign showcases an assertive Muslim community coming out of the post-September 11th shadows of suspicion and fear. "When the Muslim school holidays issue emerged, it became, I believe, a way for [Muslim immigrants] to begin to gradually break the psychological barriers of intimidation and to stand for their way of life," said Imam Al-Hajj Talib 'Abdur Rashid, the president of the Islamic Leadership Council of New York and the imam of the Harlem-based Mosque of Islamic Brotherhood.

The school calendar this year, the first full school year under the de Blasio administration, does not mark the two Islamic holidays. But Eid al-Fitr was over the summer and Eid al-Adha, which also marks the end of the annual pilgrimage to Mecca, falls on a weekend this year.

City schools are, of course, already closed for major Jewish and Christian holidays.

Muslim advocates leading the charge for school holidays say that the issue now is one of how to implement the change to the calendar. One challenge is to determine when to close schools. Islamic authorities announce the official start date for holidays based on moon sightings. But since that method is infeasible for a school calendar determined well in advance, advocates say it should be based on astronomy. Figuring out the key details is now the subject of conversations between Muslim leaders and the City.

"The ball right now is in our court," said Linda Sarsour, the executive director of the Arab American Association of New York, who mobilized the Muslim vote for de Blasio during the 2013 mayoral election. "It's actually becoming real, but we have to make sure it works right." She added that the Coalition for Muslim School Holidays is working with religious leaders to draft a document laying out the methodology for determining when to close schools. Sarsour said that the coalition is focused on making minimal impact on the school calendar.

New York City has changed laws in the past to accommodate diverse religious communities. In 1992, Mayor David Dinkins signed a law suspending rules that required parked cars to move for street cleaning on Muslim holy days.

If de Blasio follows through on his pledge, New York City would join the school districts of Dearborn, Michigan; Paterson and Trenton, New Jersey; Burlington, Vermont; and Cambridge, Massachusetts in closing schools for Muslim holidays. And if de Blasio doesn't come through, Sarsour said she has boxes of postcards ready to be sent out to pressure the mayor to live up to his promise.

The spark for the coalition was set off in 2006, when a required Regents exam was held on Eid al-Adha. That angered many Muslims. Later that year, the New York State Assembly passed a bill requiring the DOE to make an effort to schedule mandated tests on dates other than religious holidays. In 2009, the New York City Council overwhelmingly passed a non-binding resolution to add the two holidays to the school calendar.

Today, there is little significant opposition to closing schools for Eid al-Adha and Eid al-Fitr. Anti-Muslim figures like Pamela Geller, a New York-based blogger and activist who tried to halt the building of a lower Manhattan Islamic center near Ground Zero, do oppose the move vehemently. But in an e-mail, Geller said she had no plans to wage a campaign against closing schools.

Muslim students and parents drove the campaign by lobbying elected officials to support their ask. "The problem is [when] you have to make a choice between your future, your education, and your religious holiday. That should never be an option or a choice anybody has to make," said Hassan Mohammed, a freshman at Hunter College and recent graduate of Stuyvesant, one of New York City's selective public high schools. "This [issue] really hits home for the Muslim population."