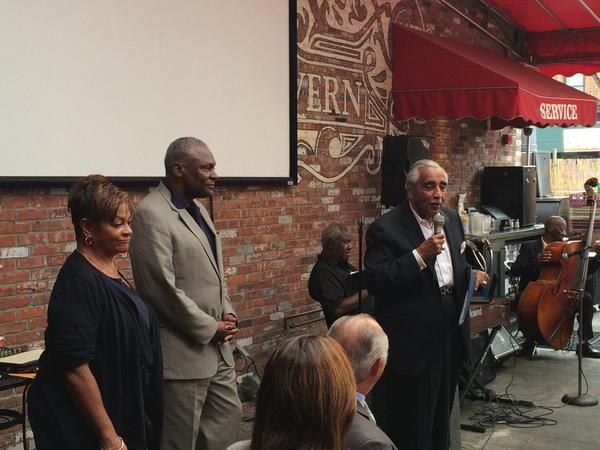 For the first time in 70 years, Upper Manhattan voters could see an open seat race for Congress in 2016.

Rep. Charles Rangel, who has represented the district for 44 years, has pledged to not run again in two years after coming through two straight tough Democratic primaries and turning 84 in June.

Questions about who will replace Rangel have been a popular topic for rumor and discussion in uptown political circles for years, and they're only getting more urgent now that Rangel says he's retiring.

Assuming Rangel follows through on his pledge, 2016 will mark the first open seat race in the Congressional district since 1944, when Adam Clayton Powell Jr. was elected during World War II. Rangel defeated Powell in 1970, and has been in office ever since.

While anything could happen in the next two years, political insiders expect to see a long list of contenders on the primary ballot for the 13th district come 2016, which will be a presidential election year. The ethnically-diverse district includes almost all of Upper Manhattan and part of the Bronx. Interviews with several current and former uptown elected officials and political insiders focused on about half a dozen main contenders.

One big question hovers: will Rangel be able to choose his successor?

"I'm not looking forward to retiring. I'm looking forward to two more years of hard work and fighting," Rangel recently told Gotham Gazette. "The most important thing is for me to live long enough to make certain I'm involved in my successor."

He declined to name who that could be.

"One of the reasons it's taken Rangel so long to decide what to do with the seat is that he wants to have a hand in choosing his successor," Harlem political consultant Basil Smikle said. "But there's no guarantee that that anointed person would win."

Crowded field
A crowded field of candidates would be a boost for State Senator Adriano Espaillat, who came close to beating Rangel in the 2012 and 2014 Democratic primaries, if he runs again.

While Espaillat lost by a larger margin in 2014 than in 2012, his actual number of votes and vote percentage went up - he received 41.3 percent of the vote in 2012 and 43.1 percent in 2014. Espaillat would enter the next race with a fairly high name-recognition advantage and the experience of having run twice before in the district, which includes a good chunk of his senate district.

An Espaillat spokesperson declined to comment about the senator's 2016 thinking and said he's focused on his senate district, especially with regard to rent law reforms in Albany.

Espaillat was endorsed by a broad coalition of elected officials and unions in his 2014 race. Hank Sheinkopf, a political consultant who has worked for Rangel, predicted that if Espaillat runs again he won't see the same enthusiasm for his candidacy in a third go around.

"It'll be hard to put together his support again," Sheinkopf said.

Whether or not Sheinkopf is right, if Espaillat runs again he would not only have an experience advantage over potential opponents, but if several Rangel allies run, they could split the vote and make Espaillat's path to victory easier.

Rangel "wants to choose a successor, but the minute he begins publicly grooming a successor, the people he's not grooming, he has no more leverage over," an uptown Espaillat supporter said.

Who could be Rangel's chosen successor? One oft-mentioned name is State Assembly Member Keith Wright, a close ally of Rangel and the chair of the Manhattan Democratic Party.

"I have no idea what you're talking about," Wright said, smiling, when asked last month if he was considering running in 2016.

But Wright could have other opportunities waiting for him, insiders say.

"I think Keith will wait it out in the Assembly to become Speaker, after Shelly [Silver] retires," said one uptown politico.

"He is in line for other opportunities – I think he'd do very well as Speaker," said former Gov. David Paterson, who represented Harlem in the State Senate before being elected Lieutenant Governor.

What about Paterson himself for Congress?

"I wouldn't rule it out, but it's not a priority for me," Paterson said. "When you have had the privilege of being governor for three years, when you've lived in the executive mansion...there aren't many things on your bucket list." Paterson was recently named State Democratic Party Chair.

Another strong Rangel ally is City Council Member Inez Dickens, whom Rangel has described as his "political wife."

Dickens, who will be unable to run for her Council seat again in 2017 because of term limits, said in a statement that she was focused on her district.

"Congressman Rangel's replacement will have big shoes to fill but I trust in the voters that whomever they choose will do their best," she said. Dickens was an active Rangel supporter this past election season and could often be seen near the incumbent during events.

"This seat has only had two people in 70 years," said Powell, the son of Adam Clayton Powell Jr., who represented Harlem in Congress before Rangel. "Both of them have been icons. Whoever replaces them is going to have big shoes to fill."

State Senator Bill Perkins, who is seen as a little more politically independent from Rangel than Wright or Dickens, is also a possible contender. His office did not respond to a request for comment.

And some hope to see Reverend Michael Walrond, preacher of First Corinthian Baptist Church, run again. He received about eight percent of the 2014 vote running against Rangel and Espaillat.

Walrond was unavailable for an interview, a spokesperson said.

Mark-Viverito, who will also be term limited in 2017, did not respond to a request for comment.

The age factor
Paterson said he hopes to see younger candidates in the running.

"One of the reasons Congressman Rangel was able to be so effective was because when he was elected, he was 40 years old," Paterson said. "He had the time to accumulate seniority."

"My first choice would be a young person that's brave and dynamic and represents the issues," he said. "And then if that isn't the case, there are a number of people around who I'm sure would all be good — my favorite would be Keith Wright."

Most of the main contenders for the seat are in their fifties or sixties. Espaillat turned 60 a few weeks ago. Walrond and Mark-Viverito are in their forties.

"I don't think that we have really involved a lot of young people in the political process," Paterson said. "I think this has been a kind of a failure on our part [by] the elected officials" in Upper Manhattan.

Smikle, a political consultant, agreed that age could be an important factor.

"Congress is a seniority-based system, so you want someone who will be able to stay there for 15 or 20 years to build seniority," Smikle said. "There'll be some apprehension of electing someone who's significantly older."

Race and geography
The 2012 and 2014 elections were influenced by a racial dynamic in this changing district, which includes central Harlem and its large African-American population, and Washington Heights and Inwood, which are more Dominican. A 2012 redistricting that included part of the Bronx increased the district's Hispanic population.

In both Democratic primaries, Espaillat won big in Dominican areas, while Rangel took the lead in African-American and Puerto Rican-majority areas. Rangel accused Espaillat of having done nothing in office "besides saying he's a Dominican."

The growing Hispanic population in the district - along with an ongoing effort to register Dominican voters - could be a boost for a Dominican candidate like Espaillat.

"This district, the way it was drawn, it's still a Harlem district, but it's no longer a black district, and a lot of people have trouble recognizing that," said Paterson, who is black. "Sooner or later it is going to be a Hispanic district likely held by a Dominican...I don't plan on being bitter when this happens because it's the inertia of change."

Wright, Dickens, Perkins, and Walrond are black. Mark-Viverito is Puerto-Rican and Espaillat is Dominican. Powell is African-American and Puerto Rican (as is Rangel).

The vote could also be split geographically. While most of the district is in upper Manhattan, it also includes part of the Bronx.

"If there is any consolidation of support [for] a single candidate in the Bronx, it would significantly change the dynamics of the race," Smikle said.

Rangel nostalgia
With almost two years to go until the next election, is it silly to already be thinking about who's going to run? Not so, said Smikle.

"The district has been represented by Rangel for over four decades, and there needs to be some conversation about the succession plan," Smikle said. "It's not just about who will replace him, it's a conversation about what the community actually needs."

In this heavily Democratic district, winning the primary will likely amount to winning the seat itself.

Some still wonder, will Rangel really retire? He's said he will - but in politics, and especially with Rangel, never may not mean never.

And in Harlem, where Rangel remains an icon, some are sad to see him go. At the African-American Parade Day Breakfast last month, several attendees worried that no one could fill Rangel's shoes.

"We don't have anyone who knows the streets, the community, the people like Charlie Rangel does," said Shirley Scott, who has lived in Harlem her whole life. "If he does retire, it's not going to be a good thing."

"I remember when he ran the first time," said Gloria Wright (no relation to Keith Wright). "He's been raising Harlem up. Everyone in politics has done something or said something they shouldn't, but he's a good Congressman."