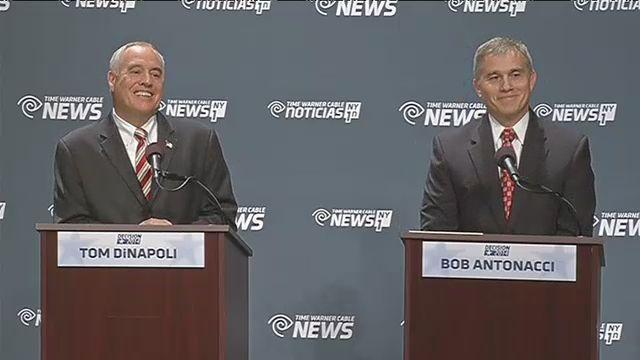 We're helping you prepare for Election Day 2014 in New York. In that vein, we bring you our best attempt to collect video ads, debate footage, and editorial board endorsements in the three statewide races as well as the race in New York's 11th Congressional District.

To see who will be on your ballot and find lots of information about races, candidates, and ballot proposals, use our Gotham Gazette-WNYC Election Guide.

To read our ongoing coverage of the races of 2014 as well as other New York politics and policy, see our most recent articles. This includes our report on the very high number of uncontested general election races for New York State Legislature. But, the three statewide races are not uncontested, and we're bringing you more information on the contests for Governor, Attorney General, and Comptroller (plus New York's 11th Congressional District). See below for all the video advertisements that campaigns for those three offices have put online on Vimeo or YouTube. We've also put links to televised debates. But first, editorial board endorsements:

Do newspaper editorial board endorsements matter to voters? Do they impact elections? Most say they have historically. Some say they don't matter much these days. It's hard to tell. Candidates certainly love to tout them when they get them and downplay them when they don't. While we can debate and analyze their impact - and some exit polling would be nice! - we can certainly track to whom these endorsements go and some of the interesting things said in support of the so-honored candidates as well as those not chosen.

We're collecting editorial board endorsements in the 2014 races for the three statewide offices of New York Governor, Attorney General, and Comptroller, as well as NY's 11th Congressional District, one of the most widely-watched congressional races in the state and country. Note: Gotham Gazette does not make endorsements. Send us additions for this page any time: email This email address is being protected from spambots. You need JavaScript enabled to view it.

The Jewish Voice for Astorino

The Jewish Voice for Schneiderman

The Jewish Voice for DiNapoli

Debates in the races for NY Governor, Attorney General, Comptroller, and the 11th Congressional District (note: these are televised debates):

Gubernatorial Debate, October 22 on PBS
Broken up by question by the Buffalo News

Video Advertisements Posted to Candidates' Vimeo or YouTube Channels (note: candidates may run TV ads and not post the video to Vimeo/YouTube):

***
Did we miss something? Please email our editor, Ben Max, at This email address is being protected from spambots. You need JavaScript enabled to view it. - thanks!
@GothamGazette