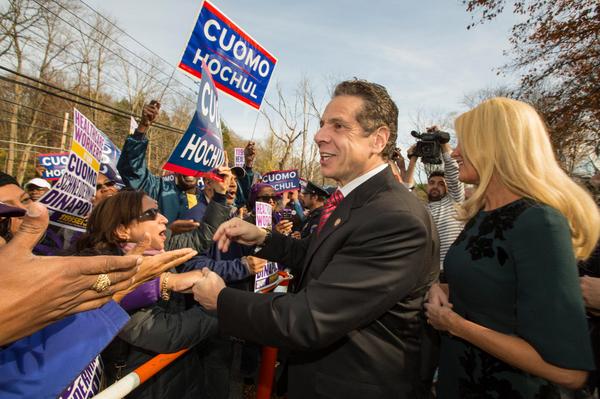 The 2014 election results are in! Well, mostly. In New York, it is a clean sweep in the three statewide races where all three Democratic incumbents will return to Albany for second terms. Governor Andrew Cuomo will now be joined there by running mate Kathy Hochul, who will be his new lieutenant governor as of January. Cuomo's margin of victory is not quite final as of about 1:15 a.m. on Nov. 5, it sits at 53.8 to 40.6 percent over Republican Rob Astorino, with 98% of precincts reporting. Green Party candidate Howie Hawkins sits at 5 percent.

Another especially key aspect of these election results is the new insights they provide into what control of the New York State Senate will look like come January. The results are a major boon to Republicans (as are the results of national elections for many gubernatorial and congressional seats). The New York State Senate will be controlled by Republicans, it seems - though as usual, things with the New York State Senate are murky and fluid. As of late Election Night, it appears that of the 63 members, 32 will be Republican, with 24 mainline Democrats. Then there are five members of the Independent Democratic Conference (IDC), Sen. Simcha Felder, who is elected as a Democrat, but caucuses with Republicans, and newly elected Jesse Hamilton, a Democrat, who has not said with whom he will caucus. And, there's the possibility of other senators shifting around. It's complicated.

There will surely be a great deal of jockeying over the next days, weeks, and months.

During his victory speech, Governor Cuomo gave a long list of progressive initiatives he plans to pass in his second term, but control of the state Senate will be integral in these efforts. Even if the Republicans do control the state Senate, though, the governor could be successful in moving his agenda if he's willing to make compromises - which he often is.

The State Assembly will remain heavily Democratic, will few shifts from election night. It's looking like the 150-member chamber will include 107 Democrats and 41 Republicans - there are two races (AD 92 & AD 116) that are too close to call as of late on election night, according to NYPIRG's Bill Mahoney.

See full results for the New York State Senate and Assembly races here, along with other results, via WNYC.

Meanwhile, there was quite a bit of controversy over two of the three New York ballot proposals on the back of voters' ballots. All three have passed via "yes" approval votes. This includes Prop 1, the constroversial redistricting reform amendment.

Prop 2, which would require electronic bills as opposed to printed bills on the desks of each legislator passed easily and was the least controversial of the three. Prop 3, the Smart Schools Bond Act, had its own share of drama - and is likely to have a lot more since it has passed and New York is permitted to issue up to $2 billion in a bond sale to fund school districts for classroom technology, secutiry systems, and/or school space.

There were also members of Congress on the ballot this year. In New York (and nationally), many eyes were on New York's 11th Congressional District. In this race, incumbent Rep. Michael Grimm was able to defeat Democratic challenger Domenic Recchia fairly handily: 55-42 percent. While neither of New York's two U.S. Senators were up for re-election, the entire House delegation was on the ballot. Nationally, Republicans took control of the Senate (and remain in control of the House).

We're following many other races that will soon be called and we will update this posting accordingly.

Stay tuned to Gotham Gazette for further information and analysis on the 2014 New York State elections and their aftermath.