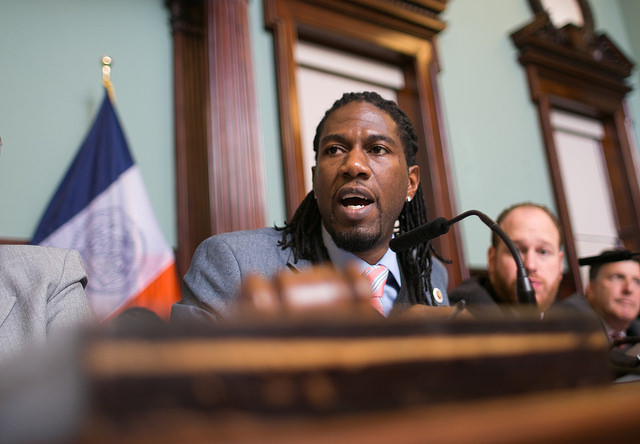 At a hearing Monday, the New York City Council's Committee on Governmental Operations approved the latest drafts of two bills that enhance the responsibility of city agencies to conduct voter registration and a resolution calling for the State Legislature to pass similar legislation.

These measures are an attempt by the Council to improve the compliance of City agencies with Local Law 29, also known as the Pro-Voter Law, which was passed in 2000. The law requires 19 city agencies to handle voter registration applications for customers.

The new legislation is headed to the full Council for a vote on Tuesday and then, if passed as expected, to the desk of Mayor Bill de Blasio. The bills expand the mandate of the Pro-Voter law to seven additional agencies and create a standard for enforcing the law, including required semi-annual reports from participating agencies. Implementation of the existing law has proven to be a problem, with city agencies failing to uphold their responsibilities to offer registration forms to New Yorkers doing other business with the City.

The accompanying resolution calls upon the State Legislature to augment existing agency-assisted registration laws to include codes on registration forms that would help track agency performance and registration statistics.

Council Member Ben Kallos, chair of what he called the "good government committee," introduced Intro 493 A which expands scope of the Pro-Voter law and sets a deadline of December 1, 2015 for agencies to integrate their forms with voter registration.

The second bill, Intro 356 A, which establishes reporting requirements for the agencies, and the accompanying resolution, were introduced by Council Member Jumaane Williams.

"The last election was abysmal," Williams said of voter turnout in response to questions from Gotham Gazette. Stating that the city and state are falling behind in civic participation, he said, "This should be an issue that all parties - Republicans, Democrats, third parties - every party should be working to increase participation."

The push for increased voter registration began in July with Mayor de Blasio's Directive 1, which ordered agencies under the Pro-Voter law mandate to create plans for implementing the law. Then, in October, the City Council introduced the two new bills in response to a report released by a coalition of good government groups which showed the City's lax compliance with Local Law 29.

According to the report, 84 percent of clients at 14 of these agencies were not provided registration applications when they should have been. Additionally, only 2 out of 5 applicants with limited English proficiency were given translated applications, and agents were not trained in the application process.The report was compiled by the Pro-Voter Law Coalition, comprised of the Center for Popular Democracy (CPD), the Brennan Center for Justice at the NYU School of Law, Citizens Union of the City of New York, and the New York Public Interest Research Group (NYPIRG). Their investigation was aided by the Asian American Legal Defense and Education Fund.

The report's importance is highlighted by the fact that over 30 percent of New Yorkers who were interviewed at the agencies were not registered to vote.

The de Blasio administration initially rejected the two bills over privacy concerns and on the grounds that they came too close on the heels of Directive 1 and wishing to see agencies given more time to comply. Taking those concerns into consideration, changes were made to Williams' bill on reporting mandates. Williams disagreed with the administration but eventually came around to ensure changes were made in the proposal which will protect applicants' information while still allowing the Board of Elections to track registration data from agencies.

"I'm expecting (the) resolution to have a serious impact in Albany," said Council Member Kallos to Gotham Gazette. "Whether it's the Assembly or the Senate, we can all agree that government works better when we measure what its doing and this will take a step towards that."

Representatives of the good government groups that authored the report also testified at the hearing. Steven Carbo, director of Voting Rights and Democracy Initiatives at CPD praised the proposals, asserting, "Likely hundreds of thousands, if not millions of eligible voters were never given the opportunity to register to vote over the years, perpetuating regrettably low rates of voter registration in New York particularly among lower income, of color and immigrant citizens," he said.

Peggy Farber, legislative counsel for Citizens Union, called the proposals "meaningful steps to improve the pro-voter law, to codify the important work of the administration."

On Tuesday, the bills and the resolution will head to the full Council for a vote at the Stated Meeting, where they are very likely to pass.