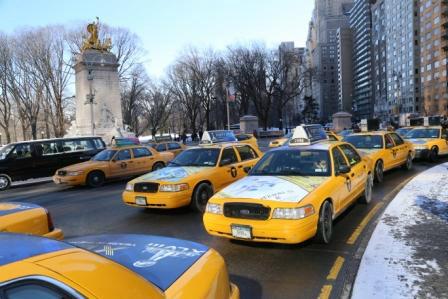 NEW YORK—When Mayor de Blasio signed his first executive budget at the end of June, the City was expecting income of $766 million from the sale of 550 taxi medallions. But five months later, those estimates have been substantially reduced. According to the November Financial Plan released Tuesday, the City is now forecasting $506 million less coming into City coffers this fiscal year.

Officials from the city's Office of Management and Budget (OMB) attributed the dip to more realistic planning, not a shaky medallion market or competition from startups Uber and Lyft.

"The original plan was very aggressive," an official from OMB said at a budget briefing on Tuesday. "Actually, no one has ever seen a plan like that before in New York City. This is a much more realistic plan."

Instead of selling 550 taxi medallions this fiscal year (FY 2015), the City will only sell 200. The plan calls for the sale of 350 medallions in each fiscal year from 2016 through 2019. The $1.5 billion projected revenue from medallion sales by fiscal year 2018 remains the same, according to OMB.

The "aggressive" nature of the original plan was known and approved by de Blasio's budget team in June, so what's changed? In addition to heeding warning from the Financial Control Board about what was clearly an accelerated plan, officials from OMB cite a much lengthier than anticipated process to close on medallion sales.

Part of that longer process is due to the fact that the new medallions being sold must be for wheelchair accessible taxis, a determination recently made after years of litigation. Those vehicles take longer to build, something apparently not originally factored in.

The City was also awaiting final approval from Albany regarding its Accessibility Plan, which the City must follow to make the entire fleet of over 13,000 taxis wheelchair accessible by 2020. Plan approval was needed to move forward with more than 400 medallion sales and was finally given by state lawmakers in August. The City spent the months since the passage of its budget looking at past schedules and factoring in the Accessibility Plan to formulate a new roadmap.

"We had the luxury of being able to do all that research into past medallion sales scheduling and we thought it was the smarter, wiser way to go considering the new dynamic of the accessible medallions," Allan Fromberg, spokesperson for the city's Taxi and Limousine Commission (TLC) said by phone Tuesday evening of the new plan.

Unspoken at the budget briefing were the fiscal realities surrounding the taxi medallion sales. When then-Mayor Michael Bloomberg positioned medallion sales into his final two budgets, the city was facing a much different fiscal picture.

The medallion sales were sorely needed to plug budget gaps that plagued the city, a byproduct of the Great Recession and higher healthcare and pension costs. As we near the end of the 2014 calendar year, the financial state of the City is stronger than it has been thanks in large part to a bullish stock market and better than expected tax revenue. Out-year budget gaps are below historic averages, meaning the medallion sales are less of a budget lynchpin and more of a bonus - or contingency plan.

"Thankfully we are at a place, budgetarily, where we can make smart decisions based on policy and good regulatory practice rather than budgetary needs," Fromberg said.

While outlook still seems bright for medallion sales, there is the great unknown of how new tech companies like Uber and Lyft will affect the medallion market in the future. The City is hedging its bet that medallion sales, which have climbed exponentially in the last decade, will, at the very least, stay at recent levels.

OMB projects each medallion will sell for the same between now and the end of the Financial Plan, which runs through fiscal year 2018. Gotham Gazette asked OMB for that budget figure, but was referred to TLC. A spokesperson for TLC could not provide the figure, but said it was a conservative estimate.

Uber and Lyft have only recently begun operating in New York City and in the coming years even more competition could be introduced into the marketplace.

Gotham Gazette asked OMB at the budget briefing if the emergence of Uber and Lyft played a factor into the revision of the numbers. The question was referred to TLC.

Fromberg said TLC "looked at a lot of factors" when coming to new renderings.

"I wouldn't point to one particular company or mode of transportation. I think we looked at a broad swath of things," Fromberg said. "But at the end of the day it really did just come down to smart scheduling."