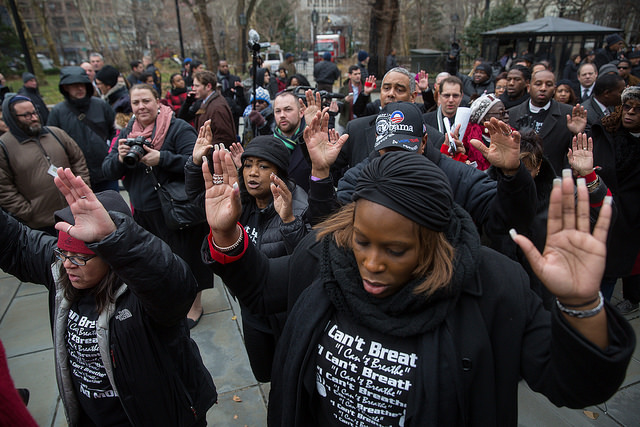 With the first phase of a policy initiative, the New York City Council is continuing its response to the death of Eric Garner and the surrounding issues of police accountability and criminal justice.

On Monday, many members of the Council honored Garner and called attention to problems with the criminal justice system in New York and elsewhere by performing a "die in" in the City Hall courtyard, blocking traffic on Broadway, and chanting "I can't breathe" eleven times in council chambers.

On Wednesday, Council Speaker Melissa Mark-Viverito, Council Member Vanessa Gibson, chair of the public safety committee, and other council members are announcing the first two measures in their more formal response to what a press release refers to as the "Eric Garner incident." Garner was killed on July 17 while police arrested him on a Staten Island street. Last week, on December 3, a grand jury determination was reached not to indict the police officer, Daniel Pantaleo, whose chokehold led to Garner's death.

"The tragic death of Eric Garner is a clear call for meaningful policy changes at several levels within our city," said Council Member Debi Rose, who represents the Staten Island district in which Garner lived and was killed.

The Council's policy response begins with two initiatives to be announced Wednesday.

First, the Council will request that new NYPD Inspector General Philip Eure investigate "how NYPD tracks, monitors, and addresss alleged abusive conduct" by its officers. According to the law establishing the Inspector General (Local Law 70 of 2013) the Department of Investigations (DOI) Commissioner is empowered to conduct investigations of the NYPD and must do so at the discretion of the Mayor and the Council. The Inspector General reports to the DOI Commissioner. In a press release, a spokesperson for IG Eure stated that the office "[looks] forward to receiving the City Council request." The spokesperson added that "for several months, DOI's Office of the Inspector General for the NYPD has been reviewing questions related to the use of force and, specifically, chokeholds."

Second, the Council will establish "CCRB Community Outreach locations" in council members' district offices. The CCRB is the Civilian Complaint Review Board, the mechanism by which New Yorkers can file grievances against the NYPD and its officers. It is unclear at this time how many council members will be establishing the CCRB outposts, which will allow for on-site complaint and evidence gathering. Among other tasks, the CCRB will also train council members' staffs and perform community outreach in districts.

In a statement, Speaker Mark-Viverito said that the City Council is "taking a comprehensive look at the steps we can take to find a positive outcome from the tragic events which led to the death of Eric Garner."

Mark-Viverito has said that she believes the grand jury erred in its decision not to recommend an indictment of Pantaleo. The speaker wore the same "I Can't Breathe" t-shirt as many of her colleagues on Monday and led the "I Can't Breathe" chant at the start of that afternoon's full-body Stated Meeting.

In her statement, Mark-Viverito added, "The overwhelming majority of NYPD officers serve honorably and with great distinction every day and these first steps are about ensuring the actions of a few don't malign the whole." This is a sentiment that echoes statements made by Mayor Bill de Blasio, NYPD Commissioner Bill Bratton, and many others.

Council Member Brad Lander explained his support for the IG report, saying in a statement, "There's good reason to believe that a small fraction of officers commit the majority of abuses that undermine community-police relations, rob people of their dignity and civil rights, cost the city money in lawsuits, and at worst can result in the loss of innocent life – but we need to see the data."

A recent report by WNYC shed some light on this issue and gave indication of what Lander refers to. An analysis of data including CCRB records and claims against the City led WNYC to about a dozen police officers "who appear to use force more often than most and who have been the subject of numerous lawsuits."

City Comptroller Scott Stringer recently launched the ClaimStat tool aimed at identifying patterns of claims against the City and reducing the expensive results of those claims. Bratton has promised to root out the bad apples in his force.

In recent days, de Blasio and Bratton have gone to great lengths to discuss the NYPD's new approach to community relations and the retraining of officers in use of force, de-escalation, and more. A pilot program of police officers wearing body cameras to record interactions with civilains has begun. (State-level officials have also been coming forth with their policy responses aimed at improving the criminal justice system in New York.)

And now, the City Council is placing its first policy pieces into the larger puzzle of criminal justice reform.

"While improving police-community relations in New York City should include retraining police officers, much more must be done," said Council Member Jumaane Williams in a statement. "We must utilize a multi-pronged effort with all agencies to instill the cultural-systemic shift needed in our police department."

Note: this article has been updated with comment from the office of the Inspector General for the NYPD and corrected to reflect that the IG works at the request of the Department of Investigation, which the Council will make its request through.