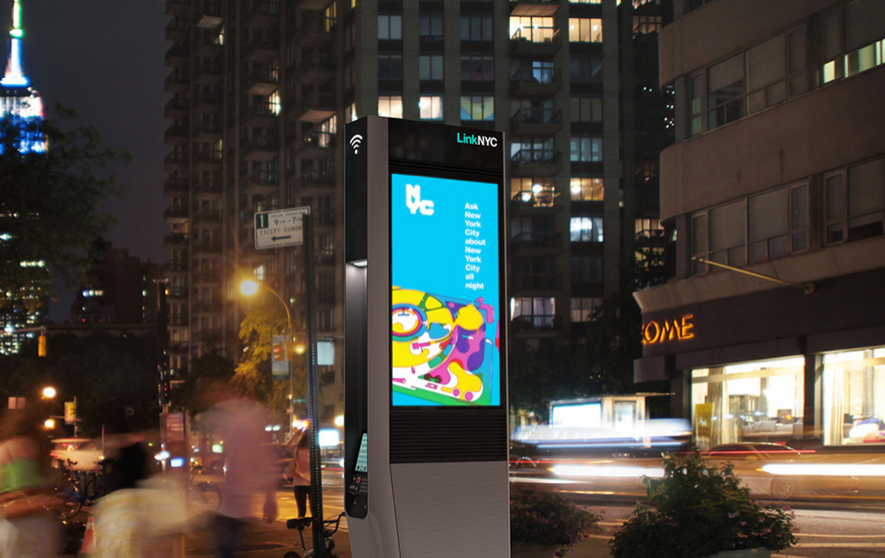 NEW YORK—An idea to turn the city's outdated pay phones into high speed Wi-Fi hotspots that started in the Bloomberg administration will now become a reality in the de Blasio administration. On Wednesday the Franchise Control Review Board (FCRC) unanimously voted to approve the franchise agreement on the historic initiative.

The agreement gives CityBridge - a consortium of companies including Titan, Control Group, Qualcomm Incorporated, and Comark - a 12 year contract to modernize pay phones in the city to meet today's technological needs. The new structures, called Links, will provide Wi-Fi access of up to 1 gigabit (GB) speeds, phone calls to anywhere in the United States, and a place to charge your cell phone - all for free.

"Today marks a significant step forward in this administration's efforts to bridge the digital divide," Mayor Bill de Blasio said in a statement. "Every New Yorker stands to gain from this historic result that will make New York City a global leader in free wireless access at superfast speeds."

The agreement had been under scrutiny from the five borough presidents, as well as the city's comptroller, Scott Stringer. They expressed concern about the distribution of the initial 4,000 Links and if the Wi-Fi speeds of those structures would be based on location.

The agreement was modified to answer those concerns. An additional 400 structures will now be built in the first four years with 251 of those going in the Bronx. These structures will be required to have the 1GB speeds, as long as the fiber-optic cable is there to support it. Community input will be allowed to select the location of these additional units.

Concerns had also been raised about the Wi-Fi speeds being tied to the structures' advertising capabilities. The administration had said that was never the case, but decoupled the language in the agreement to pacify critics.

The contract was also amended to include a solar power pilot program in the Bronx, something the administration had initially expressed concerns about. Following the hearing, Counsel to the Mayor Maya Wiley said that the administration had not believed the technology was there to support solar, but after seeing evidence from Bronx representatives, decided to agree to a pilot.

"There was no opposition to the concept, it was really just about the technology," Wiley said.

The pilot program will consist of 10 structures and the locations will be determined with consultation from Bronx Borough President Ruben Diaz, Jr.

While Stringer and the borough presidents had pushed the mayor's office in the last few weeks the negotiations in the final days brought everyone around leading to a unanimous vote.

"LinkNYC cannot and will not by itself eliminate the digital divide, but today marks an important step forward in bridging that gap," Stringer said via a representative at the hearing. "As a result I am happy to join our friends at City Hall by voting yes on LinksNYC."

The vote was the first time in recent months Stringer's office was publicly in step with the mayor on an initiative, but he did vow strict oversight on the promises made in the contract.

"As the franchise is implemented, I will continue to use my office's contract oversight and audit authority to ensure that CityBridge fulfills its promises of fast, free WiFi across all five boroughs," Stringer said in a statement.

Public Advocate Letitia James, the only public official to ask the FCRC to reject the contract, was not present at the hearing. Requests for comment from her office were not returned.

Telebeam, a company which currently owns roughly 700 pay phones in New York City, but lost its bid for the franchise agreement, also asked the FCRC to reject the contract at Monday's public testimony. The company filed a suit against the City on Dec. 4, claiming the agreement creates a monopoly and is in violation of the Telecommunications Act of 1996.

The City has argued the franchise agreement does not create a monopoly because it is not an exclusive agreement. The winner of the RFP is a consortium of companies and in 12 years the City will have the option to add another company (or group of companies) if it so chooses.

Wiley said following Monday's hearing that the City does not expect the lawsuit to interfere with the rollout of the new structures.

LinkNYC is projected to bring in $500 million worth of advertising revenue over 12 years. That money will be used to pay for other initiatives to bridge the digital divide which include greater home internet access in poorer communities, according to Wiley.

"This is a wonderful thing for street corners and that will make a big difference," Wiley said. "But at the end of the day, the real digital divide is about the home. That is about something other than this franchise."

Wiley said the de Blasio administration would be reaching out to underserved communities beginning in February to explore where to begin home-based expansion.