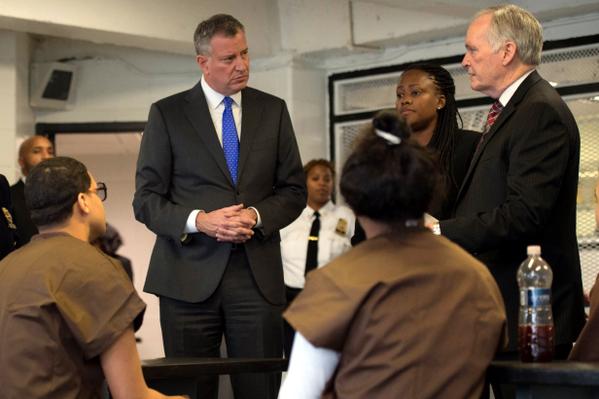 Minority youth inmates in New York prisons are disproportionately subjected to solitary confinement, which has disastrous effects on their physical and mental health and is a violation of their civil rights, says a new report by the New York Advisory Committee (NYAC) to the U.S. Commission on Civil Rights.

The report, released by NYAC on the steps of City Hall on Thursday, highlights numerous issues with the use of solitary confinement, which became a widespread prison management tool in the U.S. starting in the mid-1990s. New York alone built 10 facilities between 1998 and 2000 solely dedicated to extreme isolation. Inmates can be confined for 22 to 24 hours a day for weeks or even months in "Special Housing Units" (SHU), the official term for isolation cells measuring six-by-eight square feet. The report estimates that at any given time 4,500 inmates are kept in solitary confinement in New York.

The larger issue, however, is the effect this confinement has on younger inmates among the prison population. New York's judicial system treats anyone 16-years-old and above as an adult, and even those as young as 13 in cases of serious felonies. The report, recommending that the age of criminal responsibility be raised to 18, says that a greater proportion of youth are subject to solitary confinement. Between 90 and 95 percent of those youths in these prisons are children of color, the report says, making a case for both age and race discrimination. There is an active "Raise the Age" campaign in New York that is likely to pick up on the report's findings.

Citing the stunting effects this punitive practice can have on physical, mental, and social development, the report recommends that it no longer be used for inmates below the age of 25. At Thursday's press conference releasing the report, NYAC Chair Alexandra Korry called the practice "an abomination." "It's punishment, not rehabilitation," she added, stressing that it exacerbates mental illness among vulnerable youth. "You don't go in mentally ill, but you certainly come out mentally ill," she said.

Among the report's recommendations, the committee calls on the Department of Justice to push New York's prisons and jails to implement changes in policies. Besides doing away with the practice of solitary confinement entirely, it recommends a review of existing isolation cases, rehabilitative measures including counselling, alternatives to isolation, training of corrections officers, and regularly reporting data on solitary confinement.

The release of the report comes the day after New York City Mayor Bill de Blasio visited Rikers Island prison facilities, specifically focused on juvenile detention. At the visit, "Mayor de Blasio and Department Correction Commissioner Joe Ponte...announced the end of punitive segregation for adolescents in New York City jails," accoding to a press release from the Mayor's Office. "As of December 4, the Department of Correction had moved all 16- and 17 year-old inmates out of punitive segregation and ended the practice as a form of punishment for the youngest inmates at the nine operational jails on Rikers."

As for the NYAC report, there was some internal disagreements on the report's findings. Committee member Robert Paquette disagreed with the methodology and stated in his dissent, "The report does not represent, in my view, 'objective and comprehensive investigation' in a 'bi-partisan' fashion." Another member, Peter Wood, said the report is based on "invalid premises" and it's recommendations are "deeply flawed".

However, all committee members agree there is a problem that must be addressed. As the report's background section notes, "Despite having only five percent of the world's population, the United States has almost 25 percent of its prisoners, with one in every one hundred American adults behind bars," with rates of incarcerating accelerating in recent decades as a result of the War on Drugs. To boot, the report says, "This enormous increase in the American prison population has disproportionately affected racial minorities and youth. Specifically, as of 2012, more than 60 percent of the prison population were people of color."