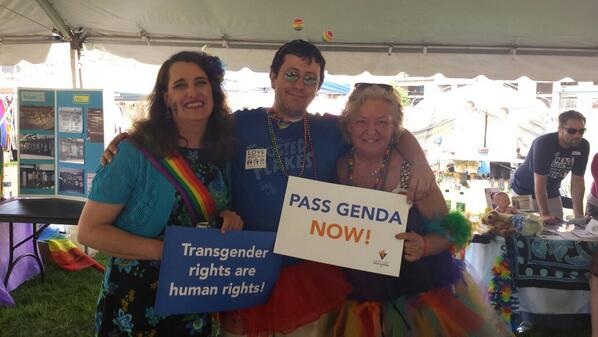 In December the suicide of Leelah Alcorn, a transgender girl from Ohio, garnered national attention. The teen left a note on her Tumblr blog saying that she hoped her death would spark conversation about discrimination, abuse, and lack of support for transgender youth. Alcorn had come out to her parents about her gender identity and was sent to a Christian conversion therapy to "cure" her.

"The only way I will rest in peace is if one day transgender people aren't treated the way I was, they're treated like humans, with valid feelings and human rights," Alcorn wrote.

Despite being a leader on civil rights issues, New York currently allows mental health professionals to practice conversion therapy - which can include severe punishments like isolation and shock therapy and that has been discredited by the American Medical Association and the American Psychological Association.

Advocates and legislators in New York say the conversation over Alcorn's death has in some ways galvanized efforts to ban conversion therapy in New York and to pass the Gender Expression Non-Discrimination Act, or GENDA. While there has been an ongoing push behind GENDA, proponents are increasingly feeling 2015 may be the year.

The Empire State Pride Agenda launched a Change.org petition this week to garner support for the bills. Advocates and legislators say it is just the start of a renewed and focused campaign that they hope will mimic the successful push for marriage equality in the state by drawing in major celebrities and business interests associated with the cause. One advocate called the new push "more professional."

"We're doing everything possible to make 2015 the year we finally pass GENDA, as well as the bill to protect LGBT youth from conversion efforts," said Empire State Pride Agenda Executive Director Nathan Schaefer. "It's our 25th Anniversary year and a landmark time for our community, as increased visibility and more inclusive laws sweep across the nation. These issues are not partisan, they're not progressive; they're life or death for tens of thousands of New Yorkers, and our lawmakers need to rise up and protect those they represent."

Last year the Assembly passed the conversion ban bill but the Senate did not bring it to a vote. Meanwhile, the Assembly has passed GENDA seven times and it has not come to a vote in the Senate.

"It's downright disgraceful that we allow therapists that are licensed by the State of New York to continue to subject minors to this dangerous and damaging practice and that we continue to legally allow discrimination against transgender New Yorkers," Schaefer. "The State of New York has historically been a leader in protecting young people from harm and all people from discrimination. We must pass these two bills and get them to Governor Cuomo's desk for his signature this year."

Advocates say that 75 percent of transgender teens report harassment in school, while 35 percent report being attacked. Transgender people of all ages face increased poverty, violence and discrimination. Many report being denied housing, healthcare, and employment.
A number of counties around the state already have GENDA laws in place.

"The discrimination and violence that transgender individuals face should be unambiguously identified and rejected in our state's laws," said Assembly Member Richard Gottfried, who sponsors GENDA in the Assembly.

Gottfried's colleague, Assembly Member Deborah Glick, looks at the push in historical context. "If you look back at the history of civil rights legislation in New York State it is true that many issues have taken years of passage in Assembly before being passed in the Senate," said Glick, who sponsors the conversion ban in the Assembly. "You shouldn't have to pass something 10 times in the Assembly to get one vote in the Senate."

Sen. Brad Hoylman, who sponsors the ban in the Senate, said he thinks there needs to be more education across the state about how the transgender community is impacted by conversion therapy. He is excited that advocates appear ready to bring the issue to the mainstream.

Glick said that debate over GENDA in the Assembly has always led to discussion over "bathroom paranoia." Assembly debates over GENDA have featured many conversations about problems that might be caused by transgender people using public bathrooms. Glick says she has never heard of an actual incident where someone complained about transgender use of a bathroom.

Glick and Hoylman both acknowledge that like with marriage equality, passing GENDA may also require major action from Gov. Cuomo. "It would be helpful for him to raise public consciousness," said Glick. "Many people are disconnected from reality or don't understand conversion therapy. It still happens. It would always be helpful to have the Governor, who has the largest platform in the state, to lend his considerable voice to the issue."

Cuomo reaffirmed his support of GENDA this August during the Democratic primary after some grumbling from LGBT groups that he hadn't put any effort into passing GENDA. "As my first term as Governor comes to a close, I am reaffirming my commitment to the progressive ideals and sense of equality that we have advanced and continue to hold dear," Cuomo wrote. "In this regard, I look forward to continuing my pledge to have our laws and policies reflect the core values of New Yorkers: equality and fairness for all."

Advocates and some legislators worked actively to elect a Democratic Senate and they acknowledge that likely won't help them when trying to work with the new Republican Senate Majority. And they further acknowledge that Senate Democrats as well as Republicans feel that gay and transgender issues could be "radioactive" as they note that a number of Republicans and Democrats who supported Cuomo's marriage equality legislation have lost their seats.

Gottfried remains steadfast, though, that discrimination against transgender New Yorkers must be outlawed. "Just like discrimination based on age, sex, sexual orientation, religion, race, disability, or ethnicity," he said. "Many cities and counties around the state have enacted local GENDA laws; New York State is overdue to add it to the State Human Rights Law."