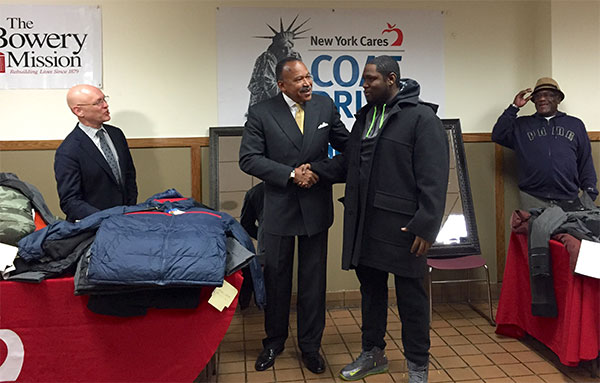 He calls her his angel. James Macklin was sleeping in a subway train when a woman woke him up in the middle of the night, Dec. 28, 1987. She gave him a slip of paper with information about the Bowery Mission. That piece of paper changed his life.

A few weeks later, Macklin went to the mission, a shelter for homeless men. He had lost his business and become homeless due to a cocaine addiction. He joined the mission's addiction recovery program. After a year of the program, Macklin stayed on and started working there. Almost 27 years later, he is still working at the Bowery Mission. He tried but could never find the woman who had brought him there. Today, Macklin is trying to provide the same opportunity to others in situations like the one he was in when his angel called.

They can be seen on many of New York's streets, bundled up to avoid the elements. While New York City is known as a city of lights and glamor, it is the most populous city in the country and also the city with the largest homeless population. Because of the scale of the problem, in 1993, New York became the first American city to create a department specifically to deal with the issue, the Department of Homeless Services (DHS). Each winter, as the city faces below freezing temperatures, the homeless population struggles to seek shelter, keep warm, and survive. And each winter, the city's activists shift into high gear, and strain under the weight of evermore to do in trying to help homeless New Yorkers survive.

"Everything is magnified by cold weather in the homeless world," said Jeff Foreman, director of policy and advocacy at Care for the Homeless. To help the city's homeless overcome these problems, there are dozens of private and religious organizations, some working in partnership with the city, that provide facilities such as shelters, soup kitchens, food pantries, and clothing banks. Many of these organizations must and do step up their efforts in the critical winter months.

As the weather gets colder, DHS also puts in place a policy called Code Blue, which comes into effect when temperatures fall below 32 degrees Fahrenheit. Under Code Blue, the number of DHS outreach vans in the field is increased to check on the street homeless. These outreach teams try to convince those on the street to go into shelters or even bring them involuntarily if a life appears to be at risk due to the cold.

The homeless population of New York City is increasing each year and is at the highest since the Great Depression, according to the advocacy group Coalition for the Homeless. DHS reported that 58,433 people slept in shelters on the night of Jan. 8. The actual number of homeless in the city is much higher as this figure does not include those sleeping in church shelters or shelters designated for veterans, HIV/AIDS patients, or victims of domestic violence, according to Foreman. There are also thousands of unsheltered homeless in the city, the exact number of whom DHS will try to count on Jan. 26 in its annual Homeless Outreach Population Estimate. Still, organizations working for the homeless believe that this count underestimates the actual number of unsheltered.

One of the main factors behind the rapid increase in the number of homeless is the lack of affordable housing in New York, according to Gabriela Sandoval, policy analyst at the Coalition for the Homeless. Another contributing factor advocates for the homeless point to is the administration of Mayor Michael Bloomberg ending programs that provided priority access to public housing. According to Sandoval and Foreman, the Bloomberg administration was concerned that these programs were incentivizing homelessness as people were coming into the shelter system just to get public housing. Once the administration ended these programs, there was a large increase in the homeless population of New York City.

The adult population in homeless shelters increases each winter, according to Sandoval and Foreman. Meanwhile, the city's unsheltered often suffer hypothermia and even death due to exposure to the cold. "As systems get overloaded, the health problems get worse," said Foreman, whose organization provides healthcare exclusively for the homeless. Last winter was particularly severe, leading DHS, under the administration of new Mayor Bill de Blasio, to reinstitute a previous version of the city's Code Blue policy. Under this version of Code Blue, homeless families are provided shelter in any DHS facility without the usual intake process. The return to this version of the policy is "very important" for homeless families as they would no longer have to go through the usual eligibility assessment at a time when the homeless population is "at high risk of having health issues or perishing," Sandoval said.

New York is a "right to shelter" city and is thus obligated to provide shelter to any eligible adult who seeks it. This is the result of a consent decree signed in 1981 to settle Callahan v. Carey, a class action lawsuit filed on behalf of Robert Callahan and other homeless men in New York City. Under the judgment, city-run shelters are also required to provide a certain minimum standard of facilities. The consent decree came too late for Robert Callahan, who died while living on the street. However, since then the "right to shelter" has helped many thousands of homeless get access to city shelters.

With this winter expected to be another severe one, city-run and private organizations must take further precautions to protect the vulnerable homeless population. In addition to city-owned and operated shelters, there are many others that the City has contracted to non-profit and for-profit organizations. Some of these shelters only operate in colder weather. There are also smaller shelters across the city that have to meet the increased winter needs of the homeless. Many of those shelters are run by faith-based organizations, such as the Bowery Mission where Macklin is now director of outreach. Once the temperature drops below 40 degrees Fahrenheit, the Bowery Mission staff moves tables in the dining hall and pews in the chapel to accommodate around 200 extra men. "It's miserable to have to survive in temperature like this," Macklin said from his own experience.

To accommodate and feed the 200 additional people in winter, the Bowery Mission relies on extra donations around Thanksgiving, according to kitchen manager Trevor Mathura. The donations received during the holiday season help the mission handle the extra demands throughout winter. While the immediate challenge is to help people survive the cold season, Macklin says the mission also tries to find long-term solutions to "pull people out of the cycle of drugs, alcohol and brokenness." Having broken free of that same cycle with the help of the mission, helping others turn their lives around is what Macklin finds most rewarding about his work.

Mary House is another shelter in the Bowery that is dependent on the generosity of donors to help the homeless. Completely run by volunteers and residents, it houses 30 women and serves lunch to an additional 30 homeless women, according to house manager Joanne Kennedy. She says winter is a time when they are "extremely motivated." They provide warm clothing including hats and gloves and sometimes even provide fare for homeless women to sleep on subways rather than have to sleep outdoors in the cold. Kennedy says that they are lucky that the holidays align with the winter season; it is the time when the need is most but also when people's generosity is at its highest. Through careful rationing, they are able to make what supplies they receive between Thanksgiving and Christmas last until the end of winter.

Joan Stevens-Yates became homeless after an illness and the death of her husband. She stays most nights in a city-run shelter but comes to Mary House for lunch, laundry, clothes and other needs. On nights when she is not able to stay in shelters, she sleeps outdoors, such as in bus stations. "Horrible" is the only word she has to describe the experience. "The homeless have it so very hard," she said.

Stevens-Yates finds shelters run by non-profits and faith-based organizations to be much better than those run by the city. "The city shelter system is a monster," she said. Advocates for the homeless and administrators of church shelters have also reported reluctance among the homeless to go to city-run shelters due to problems such as thefts and general lack of security. When contacted, employees at one city-run shelter and two drop-in centers all said they were not allowed to comment or give any information about their facilities. DHS also did not respond to questions by phone or through email.

St. Luke's Lutheran Church, located in the Theatre District, also helps the city's homeless by running a soup kitchen and clothing bank. Despite a spike in the number of donations in the holiday season, Pastor Paul Schmiege says that they do not receive enough clothing to meet the "particularly critical need" for winter clothing and footwear. To supplement donations, the church contacts local hotels and dry cleaners to collect unclaimed clothes and shoes. "You have to be resourceful," said the pastor. St. Luke's also coordinates with other churches and a synagogue in the neighborhood providing similar services. Despite the need for shelters, soup kitchens, and clothing banks, Schmiege described their function as "like going to the doctor and being treated for the symptoms but not treating the cause." He believes that the City needs to work with social services to get people off the streets not just during the winter but for the long term.

While not housing people, one organization that has a program specifically to provide the homeless with warm clothing is New York Cares. For the last 26 winters, the organization has done a coat drive to collect and distribute coats to New York's homeless population. The organization says it has distributed over 1.6 million coats during this time.

This year New York Cares has received a request for over 100,000 coats, according to their executive director Gary Bagley. He says the donated coats represent "warmth and dignity" for their recipients. Retired NBA player Nate "Tiny" Archibald was at the coat drive launch on Nov. 17 and distributed coats to residents of the Bowery Mission. He hopes those coats can help people make it through the winter because "it's all about survival."

Foreman describes the problem of homelessness in New York City as "bad, growing, and it could be a whole lot worse." However, with the change in administrations from Bloomberg to de Blasio, advocates for the homeless are expressing hope, even as numbers continue to rise. Both Coalition for the Homeless and Care for the Homeless have pointed to an improvement in policies under de Blasio, such as a restoration of housing subsidy programs. According to Foreman, "Poor policy decisions created modern day homelessness, so good policies could end it."

While advocates are positive about the new policies, the homeless population is still increasing. According to Foreman, the problem is that measures such as the restoration of housing subsidies are not enough to deal with how great the problem has become. "We're just happy to have a tool, but the problem is that it is not scaled to size," he said.

During harsh New York City winters, the immense challenges of being homeless are exacerbated. Despite any problems there may be in shelters, tens of thousands go each night. The reason, as Stevens-Yates explains it, is simple: "it's warm and that's the most important part."

***
Zehra Rehman is pursuing a graduate degree in Journalism and International Relations at NYU.