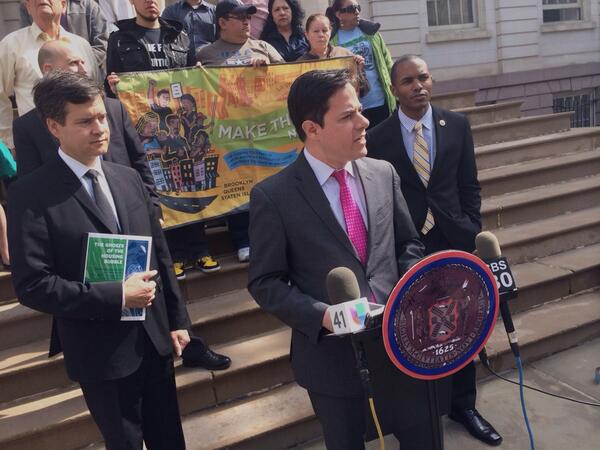 The City Council's Committee on Economic Development will hold an oversight hearing later this month to discuss plans for the redevelopment of the South Brooklyn Marine Terminal in Sunset Park.

The redevelopment of the industrial site recently became a bone of contention between the de Blasio administration and City Council Member Carlos Menchaca, whose district encompasses Sunset Park. The Mayor's Economic Development Corporation (EDC) withdrew a $115 million proposal to revamp the Terminal after it claimed Menchaca was making unreasonable demands about control of the 88-acre project.

The hearing, which will be held by the Council's Economic Development Committee, will be chaired by Council Member Dan Garodnick and take place on January 27. In a Wednesday press release Garodnick said, "We will work with Council Member Menchaca, EDC, and all relevant stakeholders to ensure that the plan for Sunset Park is primed for job growth in the context of a plan that addresses local concerns."

EDC spokesperson Ian Fried confirmed to Gotham Gazette that EDC will be testifying at the hearing. Fried added, "Good manufacturing jobs are at the top of our agenda, and we remain committed to finding a path forward that brings them to Sunset Park."

The South Brooklyn Marine Terminal site, built in the 1960s, was used primarily for handling marine cargo but has been inactive for nearly two decades. In recent years, the NYPD utilized the facility as a towing yard. In 2009, the City released its Sunset Park Vision Plan and proposed to improve the existing infrastructure in Sunset Park and connect the site to the national rail network. (The Bush Terminal Piers Park was completed in 2013 under this program).

Council Member Menchaca took to Facebook last week, after negotiations failed, to voice his concerns. He claimed that he requested the EDC withdraw its plan for a 49-year lease on the development since there had been no inclusion of the community in the decision-making. Criticizing the EDC for rushing through the process, he wrote, "I made it clear to the EDC that our community deserves better. Their request was made less than 45 days ago and required a council action today, leaving out meaningful community dialogue during a hectic holiday season."

One of his demands is that a community board or special development corporation be allowed control over the terminal and that the City Council play a part in deciding the lease, rather than hand over absolute control to the EDC. A similar arrangement exists in the Brooklyn Navy Yard. A member of the Council's Progressive Caucus, Menchaca has been a staunch supporter of the mayor, but he took a strong position against the administration in this issue. The Council Member's office declined a request for comment.

But, in the statement released by Garodnick's office, Menchaca's stance was softer. "Creating good jobs for local residents, attracting relevant and responsible industry, and appropriate investment in local community amenities are shared goals of this Council, the de Blasio administration, and community stakeholders. I look forward to studying the intersections of those goals more carefully," Menchaca said.

Currently, the SBMT space is occupied by the Sims Municipal Recycling Facility, which was completed in 2013. The remaining area was leased in 2007 to the Axis Group which planned to use the port for manufacturing and shipping automobiles. But, Axis filed for bankruptcy in 2012 forcing the EDC to revise its plans for the terminal.

Kyle Kimball, President of the EDC, told Crain's New York last week that Menchaca's actions were obstructionist and would cost his district jobs. The project, according to the EDC, calls for "reactivation of maritime service specializing in handling automobiles and other roll-on/roll-off cargoes." It would create more than 250 new jobs, they project.

In the Wednesday press release Garodnick said of the need for the Jan. 27 hearing, "There are significant economic development and community issues at play here, and we need to get it right."

Note: this article has been updated with comment from EDC.