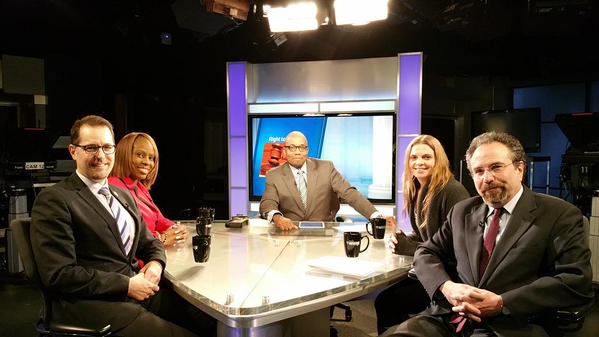 Council members and other experts discuss Right to Counsel on NY1 (photo: @MarkLevineNYC)

"Justice should not be reserved for only those who can afford it," said City Council Speaker Melissa Mark-Viverito during her State of the City speech Wednesday as she promised civil legal aid to vulnerable New Yorkers through a new Office of Civil Justice Coordinator.

By law, all defendants in criminal matters are provided with an attorney if they cannot afford one themselves, but this is not the case in civil court proceedings such as in deportation cases or in housing court.

The speaker's pledge, along with one made by Mayor Bill de Blasio in his own State of the City address that heavily focused on affordable housing, dovetail into a City Council bill aimed at providing legal representation for all low-income tenants facing eviction.

Intro. 214, also called the Right to Counsel Act, was introduced in March of 2014 by Council Members Mark Levine and Vanessa Gibson, and aims to reduce wrongful evictions, in turn inhibiting predatory landlords and minimizing the related costs of homelessness - both to New Yorkers' lives and the city coffers.

The Mayor has already announced that in areas rezoned for affordable housing, "victims of landlord neglect and harassment" would receive free-of-cost legal representation. "Protecting our tenants – through whatever means necessary – isn't just the moral thing to do," he said, "It's a critical step in making New York City a more affordable place for everyone."

The mayor's legal help plan is earmarked $36 million for next fiscal year, Capital New York reports. But the mayor's proposal is limited to the rezoned areas and the Right to Counsel bill would make the program universal - and, significantly, it would codify it into law, not easily reversed by a less tenant-friendly mayor.

"It's a question of justice we have to address," Council Member Levine said during a recent appearance on NY1's Inside City Hall. Levine says that 90 percent of tenants in housing court go without representation. Eviction is the number one cause of homelessness in the city, which is at an all-time high, and this bill is one part of a solution, Levine, Gibson, and other proponents argue.

The bill has gained momentum with the backing of numerous affordable housing advocates, legal service providers, and experts. A coalition of such groups, the Right to Counsel NYC (RTCNYC), has been fighting for the issue since June.

"The Mayor acknowledged the explicit connection between increased harassment of tenants and the City's rezoning," said Susanna Blankley, Director of Housing Organizing at the Community Action for Safe Apartments. "We don't want the help to come at the final stage of the process. We want strong anti-harassment and anti-displacement policies in place. People are being brought to court not for failure to pay rent but as a tactic of harassment."

Blankley, also a member of RTCNYC, believes the number of evictions could be halved if this law is passed. "Our main issue is essentially with wrongful evictions that could be prevented," she told Gotham Gazette in a phone interview. "Many of these people have the law on their side but don't have the resources."

Blankley works in the Bronx, which saw nearly 11,000 evictions in both 2013 and 2014. She believes the bill will reduce the number of cases taken to housing court once landlords realize they cannot use eviction as a form of harassment.

More than just a human issue, it is a matter of due process, according to Andrew Scherer, Policy Director of the Impact Center for Public Interest Law at New York Law School. "It's impossible for an unrepresented tenant to navigate the court system without having an attorney and it's a matter of fundamental due process. It's also good, solid public policy," he told host Errol Louis on the Inside City Hall panel alongside Council Members Levine and Gibson.

Scherer also emphasized that the problem is two-fold. Not only do evictions lead to homelessness, but they also reduce the number of affordable apartments in the city, a point that Blankley reiterated. Most of these tenants are forced out of rent-stabilized units, after which landlords can legally increase the rent by 20 percent, creating what Gibson called an "affordability crisis."

While many advocates and elected officials clearly agree on the premise of legal representation for all, it all comes down to funding. Comptroller Scott Stringer, the city's chief financial officer, has already come out in support of the Right to Counsel bill. At the Bronx Housing Court last week, he told the press, "An ounce of prevention is worth a pound of cure. So if you stop an eviction, you stop someone from going through a system," according to the Norwood News. Stringer said he is looking at the mayor's preliminary budget to find the funding for the bill.

The council members are confident that the Right to Counsel is an investment that gives back to the city. By keeping people in their homes, the City can reduce it's nearly $1 billion a year spending on homeless shelters. Instead of spending more than $30,000 on a family in a shelter, "it's far more prudent to spend $2,000 up front to get them an attorney so they can keep their apartment," Levine told Gotham Gazette.

Levine also pointed out the sort of trickle-down effect of the bill. By reducing homelessness, he said, it will also limit related costs including spending on emergency room visits, mental health counselling, termination and unemployment benefits, and the negative effects on children's education.

"It clearly seems like a wise investment," said Denise Miranda, Managing Director of the Safety Net Project at the Urban Justice Center. Miranda estimates the annual spending on homeless families is as high as $36,000. "We should commend this administration for it's commitment in tackling homelessness and evictions. It's a step in the right direction," she said.

The City has already put in funds over the last two years to pilot programs that the bill would make citywide. Speaker Mark-Viverito committed to expanding these programs and to increase funding, mentioning the successful Court-Based Homelessness Prevention Project that will receive $7.5 million this year. The civil justice coordinator, once established, will create a five-year plan for legal aid access for all city residents.

"Providing this access to New Yorkers is not only fair, it's also the fiscally responsible thing to do," said Mark-Viverito in her speech.

With the Mayor having presented his preliminary budget, the Council will hold hearings and formulate its budget response in the next several weeks. Levine is pushing for the funding for the Right to Counsel, which he estimates would cost between $100-150 million in the first year - a figure that is gross, not net. "It's tricky because there is significant up-front spending, but we'll recoup the money on the back end," he said. "Arguably, it'll be a money saver." He said the legislative agenda will also move quickly, expecting a committee hearing on the bill by early spring and the introduction of the Civil Justice Coordinator bill in the next few weeks. The Right to Counsel bill currently has 36 sponsors (35 of the 51 council members and Public Advocate Letitia James), including Jumaane Williams, who chairs the housing committee, in which the bill would be heard.

The speaker's address indicates that legal services for tenants is going to be a key aspect of budget negotiations and Levine stands encouraged by Mark-Viverito's pronouncements. State rent control regulations are set to expire in June and de Blasio has called on Albany to take action to protect tenants. In the meantime, the City can step in and lead the nation by creating a law unprecedented across the country, Levine says.

"This bill will change the climate nationally," said Levine, "and spark similar action all over the United States. It's a game change for tenants and housing. The ripples will be far-reaching."