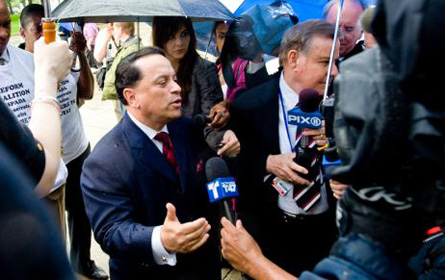 Photo Office of Sen. Pedro Espada
State Sen Pedro Espada, shown here on his way to a 2009 rally, is one of the few incumbents facing serious challengers.

"Throw the bums out." It seemed so simple at first. Mayor Ed Koch didn't coin the phrase, but he used it to greatest effect in last fall when he announced his plans to spearhead a coalition to challenge all Albany incumbents. The chaos and disgrace of the state Senate coup still hung in the air, and everyone was mad as hell. Or so Koch and others thought.

Koch explained his plans at the annual dinner of Citizens Union in October of last year. A number of Albany incumbents were in attendance, including Sen. Frank Padavan and Sen. Liz Kruger. But it didn't stop Koch from announcing that everyone in Albany needed to go. He pledged that his group would find and back legitimate challengers to as many Albany incumbents as possible.

"The good aren't good enough, and the bad are evil," he said during subsequent interviews. "The good may be good, but they haven't been willing to stand up. They show no spine."

But things have changed since then. Koch's NY Uprising, which features Citizens Union executive director Dick Dadey and former city parks commissioner Henry Stern at its head, is not pointing a sword at every incumbent. Why? Some say it is because Koch's collaborators have friends in Albany they don't want to hurt, others say there are incumbents who truly work for change, and others still say finding legitimate challengers to entrenched incumbents is no easy feat.

In fact a 2009 Citizens Union study found that from 1999 to 2009 only 25 legislators seeking office lost their re-election bids. During that same period, 54 legislators left office for another office, 31 retired to work in the public sector, 14 left due to ethical misconduct and 8 to redistricting and 7 died. (Citizens Union is the sister organization of Gotham Gazette's publisher.)

Dadey says NY Uprising never intended to challenge all incumbents. "New York Uprising was never about throwing all the incumbents out," said Dadey. "That was Ed Koch's rallying cry to bring about reform. It was never the intent of the group, just the strategy to start discussion about reform."

What Better Time Than Now?

This September and November constituents will have the chance to express their rage over Albany dysfunction, coups, scandals, lies, broken promises, inaction, late budgets, campaign finance violations, taxes and all sorts of other sleaze by voting against the incumbent.

Whatever the millions of New Yorkers decide to do, the stakes are high. The Democrats hold the Senate majority by a thread, which has stymied much action this year, and there is no question that things could change if Republicans take control of the body or if Democrats solidify their grasp. If and how the Senate shifts could have enormous influence on key issues such as state spending, tenant issues and government reform. If the Democrats keep -- or increase -- their majority in the Senate they could have firm grip on the redistricting process, building the foundation for Democratic dominance for years to come.

Meanwhile, Attorney General Andrew Cuomo, the Democratic nominee for governor, seems to be on his way to being anointed despite the large, very public failings of the last two Democratic governors -- not to mention his tendency to hide from the tough questions. The attorney general's office is up for grabs as Democrats battle it out to face the Republican nominee Daniel Donovan, and surprisingly weak Democratic State Comptroller Thomas DiNpoli faces Republican nominee Harry Wilson. The Assembly, where Democrats enjoy a super-duper majority, is not expected to flip to Republican but Republicans do expect to win seats.

The anti-incumbent mood is clear, the stakes are high, all the marbles are on the table and yet it doesn't quite feel like it.

"One dynamic going on in the macro view is we have a state that has long been becoming more Democratic," said Baruch College Professor Doug Muzzio. "They [Democrats] have a strong state ticket with Cuomo at the head. The Assembly will remain Democratic, with some seats possibly going to the Republicans, and the Senate is a toss-up. On the micro level, despite what I just said, all politics are local. I know all the constituents are telling pollsters they are ticked off and willing to toss out their own guy, but you need MOM to win -- money, organization and message. They [challengers] have the message, 'Throw the bums out!' but they don't have the organization or the money. You can have all the anger in the world but without money and organization you aren't going to have challengers."

"I think some incumbents will go down and they should go down," said Dadey. "I wish we could challenge more anti-reform legislators but the system is built to prevent it, that is why we need redistricting reform and election reform."

To reflect that, NY Uprising has moved from challenging incumbents to demanding that candidates sign a pledge to help bring about those reforms. Those who do sign get to use an Uprising seal of approval and a canned endorsement from Koch. He says he will soon be campaigning on their behalf as well. The others will face Koch's wrath.

So far, according to Mark Botnick of NY Uprising, 120 politicians have signed the pledge including Pedro Espada, the Senate majority leader, who is facing a huge civil action for looting his own nonprofit, is under a criminal investigation and has been charged with consistently flouting campaign finance rules and residency requirements. He appears on Koch's site as a "Hero of Reform."

Where the Challengers Are

That’s not to say there aren't any challengers in the city. A handful of Democratic Assembly members will face Republican challengers in November, and so some of those seats could switch from Democrat to Republican this year.

Even some Democratic Senators could have to battle tough primary challengers.

Sen. Carl Kruger of Brooklyn , who has often broken with his party and who now is reportedly the target of an FBI corruption investigation, has a primary opponent in Igor Oberman, a Russian-American attorney. Kruger has dismissed the challenger. "I don't know of one organization, one issue, one scintilla of community involvement he can lay claim to," Kruger told a local blog. "I'm Carl Kruger. I'm the state senator."

In Harlem, Sen. Bill Perkins, who has angered charter school advocates, is facing Basil Smikle, who is backed by those angry advocates.

Perkins said he feels invigorated by the contest. He said he expects to use the opportunity to talk up his stance on education and the work he has done on public authorities and eminent domain reform. "I see this as a blessing," he said. "I get to talk about my ideas and share them with the community. And I can listen to them and see what I can be doing better."

Smikle is also excited. "I've run into other challengers on the trail and there they are excited because there really is a chance to talk about the issues now," said Smikle, "and that is really refreshing."

Smikle says that he feels voter frustration and resentment when he is out campaigning in the subway but he knows he won't be able to ride anger alone to victory. "You need proper funding to win, and there isn't a lot of money out their for challengers. Anger can get you to 49 percent but you need a candidate who constituents like and trust to get to 51."

Espada, who orchestrated the coup, is facing a number of challengers. Whether he and the other incumbents will face a real fight remains to be seen. But Espada has been acting as though he does.

He has been politicking in the community as never before. But at the same time, his three possible primary challengers could divide the anti-Espada vote. "If they had a single challenger to Espada they could channel the anger that exists, but with three they will split the vote," said Muzzio.

Perhaps as notable as the state senators facing challengers are those who are not. The Democratic Senate leadership, Sens. Malcolm Smith and John Sampson, have no Democratic opponents even though they both have been linked to allegation of scandal surrounding the bidding for the Aqueduct Racino contract. Smith has been accused of other improprieties as well and also came under fire for being an ineffectual if not outright inept leader during the Senate coup. Sen. Kevin Parker, who faces assault charges for allegedly punching a New York Post photographer and who has had a number of verbal tantrums in the Capitol has no primary opponent. Parker has previously fended off two serious challenges by candidates -- including one backed by Mayor Michael Bloomberg.

So if many Democrats aren't facing forceful challenges Democrats in New York, a city that enjoys a 5 to 1 Democratic registration advantage, can Republicans do any better?

Not this year, says Muzzio, "I've said it before. The Republicans aren't just missing a bench -- they don't have a team."

Experts say there is likely only one true intra-party contest in the city --the race between Republican incumbent Sen. Frank Padavan and Tony Avella. Padavan managed to squeak by with the narrowest of victories in 2008, even though his opponent, City Councilmember James Gennaro, had little backing from the Democratic organization. Sen. Joe Addabo is also expected to face a respectable challenge from former City Councilmember Anthony Como.

New York State Republican Party chairman Ed Cox is optimistic when it comes to Assembly races in the city, but he admits the real action for the Senate -- and the possibility that it would switch back to Republican control -- rests in races in Long Island, Upstate and Western New York. "I think we could pick up 10 Assembly seats in the city. We picked up three council seats last year. People don't want a one-party government, even in New York City, where the registration is 5 to 1 Democrat."

There are a number of seats of particular interest to Cox in Queens. Cox says he thinks Vincent Tabone has a good chance of defeating whatever Democrat emerges from the four-way Democratic primary in Assembly District 46. Assemblyman David Weprin is facing a challenge from Republican Bob Freidrich and Cox likes Friedirch's chances.

Cox, who has been criticized for backing then Democrat Steve Levy in his abortive bid for the Republican nomination for governor against assumed Republican nominee Rick Lazio, said that there are few highly contested Democratic primaries because the Democratic leadership has a grasp on who gets money and who gets party support.

"The Democrats are running this from the top down. Take Gillibrand for example; when someone tries to challenge her they are discouraged. Schumer likes having that one vote in his pocket. DiNapoli survived because Shelly [Silver] wants to make sure he has his comptroller installed."

Challengers have only a few more days to get on the ballot. If they succeed they will have little time to build themselves into real threats, raise money, generate a support base and create an agenda. Some of them may very well do it, and if Koch is right, this could be the best time to ever be a challenger in New York politics. "There will never be for another 100 years the same kind of environment that we have today that would help us succeed -- that is, the disgust people have toward Albany,” he told the New York Times.