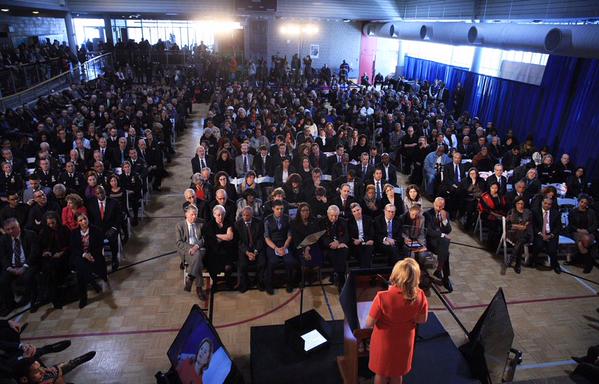 Council Speaker Melissa Mark-Viverito used her first State of the City address to advocate major reforms to the city's criminal justice system designed to keep low-level offenders out of jail. Along with a call to issue more tickets rather than arrest people for misdemeanors, in her speech earlier this month the speaker proposed a city-wide bail fund to pay for the release of eligible misdemeanor offenders who cannot otherwise afford it.

Some have wondered exactly how such a program would work: Who would qualify to have their bail paid? Would they actually go to court? Would such a fund be sustainable? Where does the money come from?

It appears that The Bronx Freedom Fund, which just recently celebrated its first year of operation, has answers. Part of the Fund's ability to function comes from a 2012 state law that sets ground rules for charitable bail organizations and licenses them. The City is taking both the Freedom Fund's successes and the State's guidelines into account as it begins modeling its own program.

A recent study released by the Freedom Fund shows that of the 140 cases it took on in its first year, 98 percent of the clients made all of their required court appearances; 56 percent of cases ended with all charges dropped; 23 percent resulted in non-criminal disposition; and 9 percent plead guilty to misdemeanors.

It is an outcome that overjoys Bronx Sen. Gustavo Rivera. "That is 140 individuals that did not have their lives thrown into chaos thanks to their interaction with the criminal justice system," said Rivera.

"[I]f you can't afford bail you will spend on average 15 days in jail," said Mark-Viverito in her speech, given Feb. 11 from a public housing facility in East Harlem. "The results are predictable: people lose their jobs, or their housing, and cannot take care of their children while they are in custody. These are people who are accused of minor offenses and are still considered innocent in the eyes of the law. This is not justice."

According to a 2011 report from the Independent Budget Office almost 40 percent of the city's 12,000-member jail population is made up by pretrial detainees who couldn't afford bail. The IBO estimated the cost of holding those offenders at $125 million.

Criminal justice experts agree that low-level offenders who make bail are far more likely to continue with successful lives and to actually be exonerated. "People seem to be coming to the realization that even a short term jail stay can be incredibly harmful to people's lives," Alyssa Work, who heads the Freedom Fund, told Gotham Gazette.

Work says she has been in contact with Mark-Viverito's office about the details of how a city-wide bail fund could work - the speaker's office declined to comment for this article, but did confirm that Mark-Viverito was referring to the Freedom Fund in her speech and that it has been an inspiration for her call.

Work came on board as director of the Fund through a fellowship from Yale Law School and she has overseen 140 Bronx residents receiving bail grants who would not otherwise have been able to afford their release. The Fund got started in 2007 when an anonymous donor gave the Bronx Defenders $100,000 to be used to pay bail. (Bronx Defenders is having its own issues around recent controversy that could affect its future funding)

The Freedom Fund is constantly replenished when cases are concluded without incident and the program has benefited from donations and grants. Work says the fund still hovers at about $100,000. Ensuring sustained funding is always a challenge for a small non-profit, of course, and even Mark-Viverito's plan will need careful planning to create solid fiscal footing.

Generally, the Freedom Fund's clients have already been arraigned and their families contacted to see if they can provide bail when Work gets a call from a defense attorney. From there the clients fill out a form and Work checks to see if they have community or family ties or steady employment, and what kind of criminal record they have. The Fund only pays bail under $2,000.

If approved, the Fund pays the bail "right there so they don't spend the night at Rikers or the boat in the Bronx," said Work.

In a sense, the Bronx Freedom Fund is Rivera's baby just as the city-wide program would be Mark-Viverito's. Rivera was approached by the Bronx Defenders (a nonprofit legal defense group) in 2010 shortly after he defeated disgraced then-Sen. Pedro Espada for his seat.

The problem, the group told him, was that they were operating in a legal grey area. A judge ordered the defenders to stop handing out bail in 2009. Rivera successfully advocated a bill that lays down guidelines for charitable bail groups based on rules that govern such groups in other states. It also provides a licensing system. When the bill passed in 2012, the Freedom Fund became the state's first licensed charitable bail fund.

Work said that the impact the program has had can be seen in the case of Fund client Billy, who was charged with a misdemeanor DUI and was unable to afford bail. Work has overseen Billy's case for more than a year. "His case just closed, and he came to court over a year and a half 11 times and never missed a date," she said. "He works with senior citizens, he's going to pharmacy school, and he's always shown up to those court dates with a smile on his face."

"If the Bronx Freedom Fund had not stepped in to help, I would have had to stay in jail until my trial was completed and I would have lost my job as a senior care aide," Billy said in a statement. "Thanks to them, I was not only able to return home immediately, but I was also able to fight my case and resolve it by attending an alcohol treatment program."

Mark-Viverito's pitch for a city-based jail fund also takes into account the fact that keeping people like Billy in jail costs the city money. She estimated in her speech that a city-wide fund could save the city millions a year. "Whether it's the $100,000 a year it costs to house someone on Rikers – or the public assistance programs many must access upon leaving – New Yorkers are paying this bill," Mark-Viverito said in her speech. "And let's not forget, the U.S. Attorney's Office issued a scathing report, finding excessive force and violence at Rikers Island," she added. "We cannot continue to lock up those accused of low level, non-violent offenses without recognizing the dire, long-term consequences to them and to our city."

Mark-Viverito's plan appears to be in its infancy, but legislation could be introduced any time, especially as budget season has begun and money for even a city pilot program may be included in the Council's budget.

Even with a successful city-based venture, Rivera said, "I don't imagine the Freedom Fund is going away." He said he is excited to see the city plan come together: "Imagine how many thousands of lives can be positively impacted if we put the same work in with the correct people."