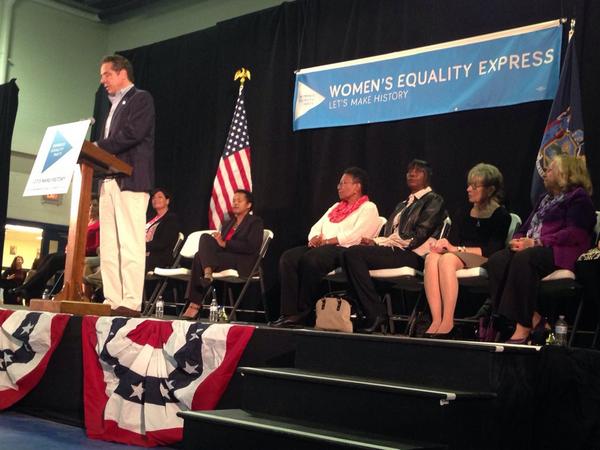 A bill that would make it illegal for landlords to discriminate against tenants based on their source of income appears to have become a pawn in the Legislature's battle over Gov. Andrew Cuomo's Women's Equality Agenda.

The bill would update existing law that prevents landlords from discriminating against tenants based on race, sex, and other factors to include source of income.

The measure is designed to help tenants who pay for housing through public assistance, alimony, and child support. Sen. Daniel Squadron, who has sponsored the bill in the Senate since 2010, has focused specifically on how the bill would help disabled New Yorkers who receive assistance from Social Services Disability Insurance, Supplemental Security Income, and housing vouchers.

Gov. David Paterson vetoed the bill when it successfully passed both Democratically controlled houses of the Legislature in 2010. The Senate has failed to act on the legislation since then and this year the measure is tied up in the fight over the Women's Equality Act (WEA). The Republican controlled Senate voted on and passed individual planks of the WEA earlier this year, excluding the measure that codifies Roe v. Wade abortion protections into state law. Cuomo and the Democratically controlled Assembly refuse to pass elements of the WEA individually, insisting that it is all ten or none.

One of the WEA measures prohibits housing discrimination based on domestic violence status and creates a task force to study the impacts of source of income on housing.

"The good news is that this issue is one that folks on both sides of the aisle has expressed support for," said Squadron of the source of income protection. "The bad news is that the bill that came up for a vote this year only creates a study."

The Assembly has refused to vote on individual sections of the WEA in an attempt to force the Senate to consider the controversial abortion plank, but the results seems to be that the rent discrimination bill is not likely to come to a vote in the Senate any time soon.

Assembly Member Marcos Crespo sponsored the Assembly version of the housing discrimination bill last year. His office said that he was set to introduce the bill again this year, but offered no thoughts on the fate of the legislation.

"We really don't need a study to see there is a problem," said Michael McKee of Tenant's PAC. "It is so like government to commission a study, debate the study, and kick it on down the road."

The office of Republican Sen. Joseph Robach, who sponsored the Senate bill that creates a study on source of income discrimination, did not return calls for comment.

The City Council passed source of income discrimination legislation in 2008 only to have it vetoed by Mayor Michael Bloomberg. The Council then overrode the veto.

In 2009, the Legal Aid Society launched a lawsuit against 30 landlords who turned away Section 8 vouchers from current tenants. Lawyers for the landlords argued the city law only applied to future tenants, but the courts found the law applied to current and future tenants. The Rent Stabilization Association (a deceptively named landlord group) has insisted in a number of statements over the years that landlords simply don't want to take part in Section 8 voucher systems because of bureaucratic delays, not because they want to discriminate against poor or black or Latino renters.

Goldiner said she believes the influence of the real estate industry's massive campaign donations has kept the State from adopting the law. "We have source of income legislation in the city, in other municipalities and multiple other states, and the world has not come to an end," she said.

Goldiner said that if the State does adopt protections against source of income discrimination, Legal Aid would not likely become involved in enforcement as it did in the city, however she noted that a number of organizations across the state could get involved. She hopes the law would enable tenants who receive government assistance "greater mobility" because they wouldn't have to be afraid of being rejected by landlords outside the city.

Tenant advocates insist that the issue has become more of a problem as communities become further gentrified and landlords look to push out low-income renters.

In August of last year Attorney General Eric Schneiderman reached settlements with a number of landlords and rental agencies for discriminating against renters with vouchers in both New York City and Buffalo. Buffalo is one of a few localities outside of the city that have source of income laws on the books.

"Discrimination comes in many forms, but denying a home to someone because they receive government assistance is one of the most insidious, having a disproportionate effect on black and Hispanic individuals," said Schneiderman at the time. "No one should be turned away from an apartment based on a lawful income source, and we will continue to fight to ensure that everyone is treated equally under the law, regardless of race, ethnicity, or income."