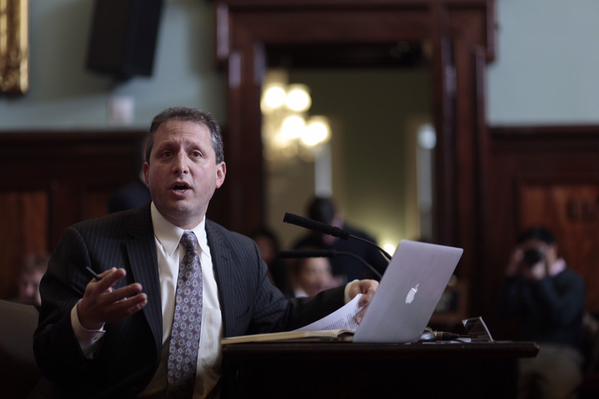 NEW YORK—Much needed change is on the horizon for the City's Commission on Human Rights, but just how quickly that change will be implemented is up in the air.

On Tuesday the City Council held an oversight hearing on the Commission (CCHR) and heard a package of bills aimed at providing greater insight and transparency to the agency. For years advocates have decried the lack of funding and staffing of the CCHR, the city agency charged with enforcing the Human Rights Law.

In fiscal year 1991 the CCHR had a staff of 241 and a budget of $9.5 million, according to budget documents. In fiscal year 2015 there are only 66 positions, and a budget of $4.5 million. In her State of the City address last month, Council Speaker Melissa Mark-Viverito vowed to increase funding by $5 million and boost staffing by 65.

CCHR Chair Carmelyn Malalis, appointed to the position by Mayor Bill de Blasio in November, is supportive of resurrecting the Commission, of course. As a seasoned civil rights attorney in the private sector prior to her appointment, she saw the protection the Human Rights Law provides.

But on the bills proposed by the Council, Malalis is less supportive, saying at Tuesday's hearing that she agrees in principle, but is unsure on the timeline.

"I am concerned that placing any additional obligations on the Commission with short timelines—such as those included in the proposed legislation—may actually be counterproductive to making the commission more effective, more visible, more accessible, more transparent, more responsive, or more impactful," Malalis said at Tuesday's hearng.

While she was named chair of the Commission in November, Malalis has only been on the job for two weeks. She said she is just beginning the process of reviewing the agency's operations, policies, and procedures. Following the review she will implement a multi-pronged strategy, she said, which will take some time to complete.

Specifically related to the bills requiring testing, Malalis said, "I am concerned that the timelines imposed in the bills may actually be counterproductive to the Commission expanding an effective testing program, which includes community partners and advocacy organizations that can help with a thoughtful expansion."

When asked what would be an appropriate timeline, Malalis said that being in her position such a short time, she could not give a deadline.

Council Member Deborah Rose pressed Malalis on the issue of the timeline, arguing if she has only been on the job two weeks, how could she know the timelines wouldn't work.

Malalis opened up, saying she was eager to engage in the community and with her staff, a time consuming job as it is.

"I am fairly concerned about having to spend much more of that time on fulfilling the reporting obligations that would be necessary under the bills," Malalis said.

She also tipped her hand at what appears to be the administration's fear of statistics that could be interpreted in a negative way. Her testimony reflected a desire to look at stats in 2016 or 2017, after a new strategic plan will have materialized.

"If these three bills were to become effective immediately, I fear that the reporting would not be reflective of what is down the pipe and what is underway," Malalis said.

That answer did not sit well with Council Member Brad Lander, who is a lead sponsor on Intro. 689.

"If it were just about you, we could definitely be patient," Lander said. "But we, and I really mean we, have let this agency deteriorate long past the point of patience."

He added, "I would like to point out that you are only in week two, but the de Blasio administration is in month 15. That was too long to wait to appoint a new commissioner, to get a new commissioner in place and to start to have a strategic plan."

Lander also argued the majority of the reporting requirements for Intro. 421 are likely already being kept and that if testing programs are already in place, the data likely already exists.

"For that information to be meaningful, more time needs to pass so that some of the information it requests, for instance our work with Corporation Counsel, has time to develop," Malalis responded.

Civil rights advocates, who have been pushing for CCHR reform for years, are even less eager to wait longer for data on the Commission's work enforcing the Human Rights Law.

"You really want to get a baseline now. No one is going to be blaming the new crew for what has gone on," Craig Gurian of the Anti-Discrimination Center said during his testimony. "It could not be less burdensome. If, in fact, the Commission is currently testing, it is, in fact, complying with two of the bills [already]."

It appears the Council and the administration are not far apart on the goals of revamping the CCHR, meaning negotiations should yield some changes to the bills sooner rather than later. Malalis will be testifying later this month during budget hearings where these bills, as well as staffing and funding issues, will be addressed.