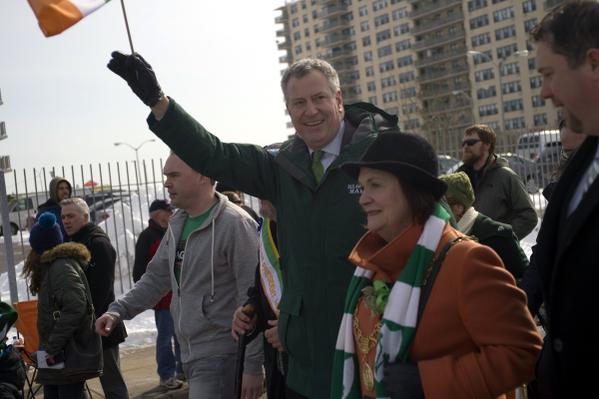 Mayor Bill de Blasio got a boost from Assembly Democrats on Tuesday in the form of their one-house budget proposal that includes a number of the mayor's major priorities. Facing a state budget negotiation with his agenda at the mercy of his rival-pal Governor Andrew Cuomo and the Senate Republicans who he unsuccessfully tried to unseat last year, de Blasio needed some help.

Bargaining help arrived thanks in part to de Blasio's new Albany ally, recently minted Assembly Speaker Carl Heastie, a Democrat from the Bronx. The most direct symbol of Heastie's and his New York City-dominated chamber's allegiance to de Blasio comes in the form of a budget that renews mayoral control of city schools for 7 years, delivers a major increase in education funding without Cuomo's proposed reforms, increases pre-K monies, and would deliver a $15 minimum wage for the city. It is unlikely any of these proposals make it into the state budget unscathed, but they function as a negotiating post for the Democratically-controlled Assembly.

"I commend the Assembly for its one-house budget proposal, which includes a number of initiatives that will go a long way toward combating inequality and protecting New Yorkers around this city," said de Blasio in a statement. "I am grateful to Speaker Heastie and the Assembly for their leadership."

Cuomo's budget - which de Blasio gave mixed reviews during recent Albany testimony - ties a $1.1 billion increase in education spending to a number of reforms opposed by teachers unions and their allies. The Assembly budget would increase education spending without those proposals, which include increasing the degree to which standardized tests factor into teacher evaluations and raising the charter school cap. Cuomo has insisted that he will only increase education spending by a few million dollars if the Legislature does not agree to his reform package, which is lauded by those in the so-called education reform movement.

De Blasio has been outspoken recently about education funding and even teamed with Cuomo foil Syracuse Mayor Stephanie Miner to call on the governor and Legislature to increase education funding to what they call necessary levels. Advocates point to the 2003 Campaign For Fiscal Equity Lawsuit where an appellate court judge found the State allows public schools to go "chronically underfunded."

The Assembly also sided with de Blasio on the minimum wage. Cuomo and de Blasio both support a wage increase - and one that would be in some way larger for New York City, where the cost of living is greater, than the rest of the state - but they differ in their plans.

"Raising the minimum wage is about the moral obligation we have to help families across the state who are struggling to get by," Assembly Speaker Carl Heastie said in a statement. "The current wage floor is not enough to allow full-time workers who put in a 40-hour work week to afford life's basic necessities, let alone achieve financial independence."

De Blasio praised the move in his statement: "The Assembly's minimum wage proposal is also a critical step toward providing the fair wages New Yorkers need and deserve as we continue to take on income inequality in New York City and beyond."

De Blasio has shown an increased appetite to publicly challenge Cuomo this year. His Feburary budget testimony, although at times praiseful of Cuomo, also included criticism of the governor's funding plan around programs to help the homeless and the state's commitment to the New York City Housing Authority (NYCHA).

The Assembly budget addresses those issues and others by doing away with Cuomo's proposed decrease in funding the city receives for its Emergency Assistance to Families program. De Blasio testified before the Legislature in February that the plan "would effectively mean a $22.5 million cut to our homeless prevention programs. That money would provide shelter for 500 families for a year."

The Assembly would also give de Blasio an extended break from having to petition Albany to extend mayoral control of schools. Cuomo has proposed a three-year extension while the Assembly prefers seven. De Blasio called for permanent mayoral control last month.

Liberal advocacy groups like The Working Families Party and Citizen Action also applauded the Assembly budget. "Millions of New York's lowest paid working families can finally imagine a life above the poverty line," said WFP chair Bill Lipton in a statement. "We commend Speaker Carl Heastie, Labor Chair Titus and the Assembly majority for calling for a $15 minimum wage. New York should be a leader in the fight against inequality and for an economy that works for all of us." Lipton also praised the Assembly's education funding proposal.

The Senate's one-house budget is expected to exclude a number of priorities de Blasio has advocated, including The Dream Act and a minimum wage hike. Senators say their proposal will increase education aid by $1.9 billion.

The Assembly budget ignores a slate of ethics reforms in the governor's budget (which de Blasio has not weighed in on). Cuomo has insisted the reforms are non-negotiable and he is willing to have a late budget to get them. Heastie said that those reforms are still being discussed. "We made reference to the issues on disclosure, we have campaign finance reform and many of the discussions that we've been having with the governor have been going well," Heastie told reporters."I think by the time we get to voting on the budget, we'll have a very detailed and satisfactory ethics reform."