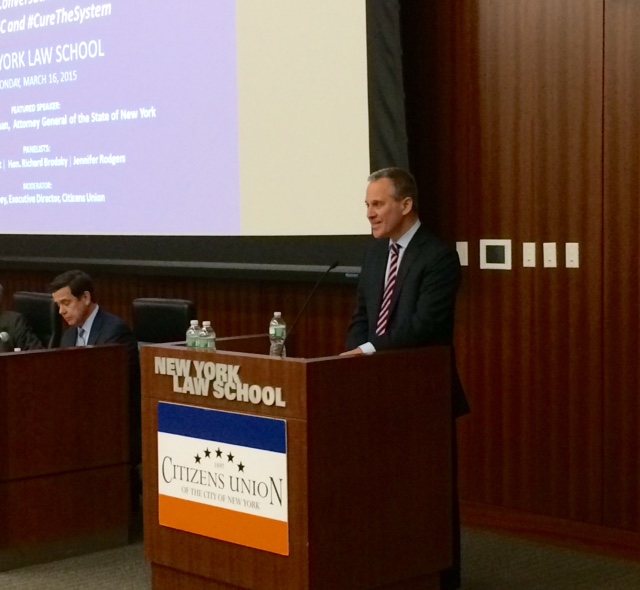 NEW YORK - Attorney General Eric Schneiderman on Monday inserted himself squarely in the debate on ethics reforms by proposing a slate of measures that would tackle the culture of corruption in Albany.

"Corruption has been a feature of government in the Empire State for a long time," said Schneiderman at a forum hosted at New York Law School by good government group Citizens Union. Speaking to an auditorium of about 200 people and others watching a livestream, the attorney general criticized the history of ethical lapses in the state Legislature and proposed sweeping changes that go beyond the "marginal reforms" introduced over the last few years - and even beyond the plan recently outlined by Governor Andrew Cuomo.

Schneiderman's plan includes a ban on all outside employment for state legislators - a line that drew applause from the crowd upon delivery - and ending per diem payments, but significantly increasing annual salaries and indexing them to cost of living increases.

He also proposes a state constitutional amendment establishing four-year terms for lawmakers, saying that it would end the "non-stop re-election fundraising and campaigning" that he says happens with the current two-year terms. And, Schneiderman put forth a systemic, multi-pronged plan for campaign finance reform, saying generally, "We cannot discuss reform without addressing the stranglehold that political contributions have on our government."

At one point, the attorney general spoke directly to lawmakers, asking them "as colleagues in public service" to join him in reforming the system, reminding them that he and other reformers are going after that system, not them individually.

Among other eyebrow-raising proposals, Schneiderman reiterated his call for the empowerment of the office of Attorney General for enhanced jurisdiction to investigate and prosecute public corruption. Schneiderman pointed out that his previous request for such authority was denied by Governor Cuomo, who supported the step when he was Attorney General himself. This, along with much of Schneiderman's reform agenda, faces an acutely uphill battle toward realization.

Despite this call and his rocky history with the governor, Schneiderman did show support for Cuomo's tactic of attaching ethics reform to budget negotiations. Urging the Governor to hold out for even bolder reforms, he said, "A late budget would be a small price to pay."

Schneiderman recently dealt a serious blow to Cuomo on his controversial email deletion policy, effectively pausing the policy in his office and forcing the governor to consider alternatives. Cuomo has said that in the next couple of weeks he will call a summit to create a uniform email retention/deletion policy across state government entities.

Of Schneiderman's reform ideas, Citizens Union Executive Director Dick Dadey called them "aggressive and full-throated proposals to end the corrosive culture of corruption in Albany that has put too many elected officials behind bars and taints the many good lawmakers who serve well the public interest."