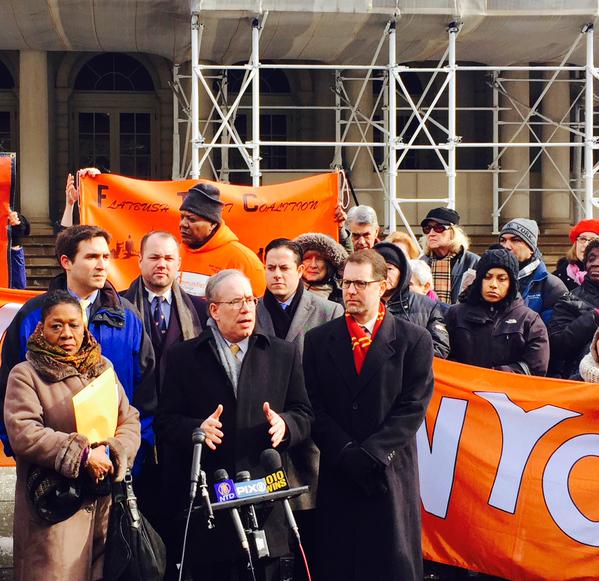 New Yorkers work a lot. It's no secret, but just to make it crystal clear and have the data for the bragging - or weeping - rights, a new report shows the reality in stark detail.

A "first-of-its-kind" analysis of workplace trends by City Comptroller Scott Stringer shows that New Yorkers work longer hours than people in 29 other cities across the U.S. when factoring in time spent commuting. An analysis of data from the 1990 and 2000 census and the 2013 American Community Survey shows that the New York workweek averages out to a combined 49.1 hours of work and travel. Not only do people in the city spend more time at work than those in most other cities, but they spend more time commuting than people anywhere else, with an average of 6 hours and 18 minutes each week.

New York City's combined work-commute total puts it first, just ahead of San Francisco, Washington, D.C., and Houston. Stringer's report says that while New Yorkers might "take some pride in our dedication, ambition, and toughness" from this standing, there are also clear disadvantages to such a reality.

Making the most time sacrifice, people in New York's finance sector have the longest workweeks, averaging 53 hours according to the comptroller's report.

Meanwhile, a long commute creates "a one-two punch" for those employed in lower-wage jobs, said Stringer in the press release announcing his office's findings. Low-wage laborers work longer hours for less pay and have to spend more of their time traveling to work and back home. On average, a security guard in the city spends more than eight hours per week commuting, the report says.

Meanwhile, those with higher-paying jobs can afford to live in areas better served by transit infrastructure and closer to the epicenter of New York City employment, Manhattan. "If New York City is going to symbolize the American dream, we can't be a nightmare when it comes to long work hours and commuting," Stringer stated.

Despite a significant wage advantage -- full-time workers in New York earn 16 percent more than their counterparts in other cities -- longer commutes mean that certain job groups actually earn less than they would in other cities. For instance, the effective wages for home health care professionals and nurses is 11 percent less than in other cities.

The report also looked at how commuting affected women with children and found that the Labor Force Participation Rate (LFPR) for this subgroup is 3 percentage lower in New York than the average of the 29 other cities included in the study.

"These findings are not just troubling – they should be a call to action," said Stringer in a statement emailed to Gotham Gazette. "We need flex time policies that allow women to stay in the workforce and give parents the opportunity to spend time with their families. We need to make targeted investments in our mass transit system-upgrading our signal system and repairing tracks-to get commuters to work on time."

Without making specific recommendations, the findings of the report touch on different policy areas from minimum wage to workplace rules, economic development to transportation infrastructure.

The crumbling state of New York's $1 trillion transportation infrastructure has been of concern to city officials and was the subject of multiple hearings in 2014. Stringer's report estimates that some of the pressure on the transit system could also be relieved by implementing flexible work arrangements, an issue that he also advocated for in June last year.