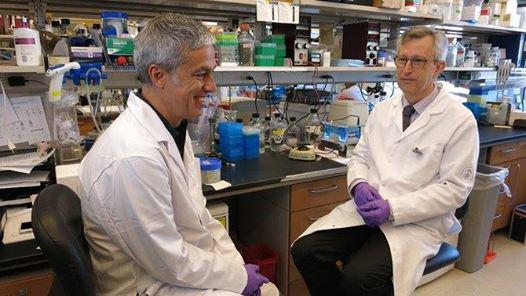 Dr. Rudolph Leibel, a man who has won international acclaim for his study of how genes impact obesity and type-2 diabetes, is warning that New York isn't doing enough to keep its most brilliant medical researchers in the state.

Texas, California, Florida, Virginia, and Massachusetts are all investing heavily in poaching major researchers like Leibel and they are succeeding, convincing them to pull up their New York stakes and take their funding, staffs, and work with them. Texas recruited 13 major researchers from New York from 2010 to 2014 - spending $40 million in the process according to information from Texas' cancer research center and other Texas universities.

Leibel, who is known for identifying the hormone Leptin and its role in obesity, accomplished a great amount of his research on the biology of obesity in humans while receiving funding from the state's NYSTAR Faculty Development Program. Leibel has brought in $80 million in other research funding since 2002; $50 million from the National Institute of Health and $30 million in independent grants.

"I received a very attractive offer from a prestigious institution and I brought it to Columbia's attention to let them know what was going on. They made a generous offer through the state program that made it much less attractive to leave," said Leibel who notes the bioresearch field has become a bit like pro sports after free agency was introduced, but with a twist.

"Before free agency came to pro sports, athletes would stay on a single team for their entire career; what has happened now in pro science is that free agency has come in but if an investigator wants to move they can take virtually all their funding with them," said Leibel. "They are far less dependent on institutions because you can move grants from institution to institution."

Leibel describes the grant money as a "dowry" that makes it even more enticing for states to attract top researchers because that grant money invariably means adding jobs to the economy, increasing the quality of medical training in the state and the economy created by whatever biotech the research helps produce.

New York's Faculty Development Program is designed to help attract and retain researchers at the state's medical schools to grow the surrounding economies. From 2002 to 2009 the State funded the program to a tune of $36 million in total. Advocates say that the investment in star researchers resulted in an economic return of $250 million. The program was defunded after 2009 due to the economic downturn, but received an $650,000 appropriation in this year's fiscal 2015 budget (an allocation kept the same in Governor Andrew Cuomo's initial FY2016 budget outline).

That amount is a drop in a bucket compared to what Texas and other states have anted up. A number of states have committed billions to state-funded research centers and to recruiting researchers from out of state.

The Cancer Prevention and Research Institute of Texas (CPRIT) was created in 2007 with $3 billion in funding over 10 years. Texas Gov. Greg Abbott has also proposed creating "The Governor's University Research Initiative" that would dedicate $500 million to attracting nationally-acclaimed researchers.

Closer to New York, Massachusetts established The Life Sciences Initiative in 2008, committing $1 billion in state funds over 10 years to bioresearch, and earning a match of $1.2 billion in private investment. The state bolstered its recruitment efforts through The New Faculty Startup Grant that provides $250,000 a year, for up to three years, for nationally prominent bioresearchers brought in to state colleges and universities.

Texas' efforts have been impactful though. One of the 13 New York biotech researchers recruited by the state since 2010 is Dr. James Allison, who has pioneered research into using immunotherapy to fight cancer - in other words, Allison has come up with ways to use a patient's immune system to battle cancer cells. Allison conducted human trials for his therapy starting in 2004 as head of immunology for Memorial Sloan Kettering Cancer Center in New York. But in 2012 he was lured back to his home state of Texas thanks to a $10 million investment from CPRIT.

"This is a man whose research on using a person's own cells to fight off cancer was revolutionizing how we treat cancer, and now he is in Texas," said Wiederhorn. "He is on the shortlist for winning the Nobel Prize for this kind of work. It isn't just the research but the workers he brought with him from Sloan Kettering to Texas and the number of people who will now travel to Texas to be a part of his trials."

Republican State Senator Phil Boyle of Long Island wrote to Senate Majority Leader Dean Skelos this year and asked for him to push for $50 million in increased funding to the research program. "This is about jobs for New York, plain and simple, and not letting these brilliant researchers and jobs go with them to Texas," Boyle told Gotham Gazette.

Boyle compares the push to invest in biotech to the State's backing of the College of Nanoscale Science and Engineering that was started under SUNY but recently became independent. Boyle said he thinks he was successful in conveying his message to Skelos. "I think the leader understands the importance," said Boyle, adding that determining "the exact dollar amount in the budget is above my pay grade."

Calls to the Cuomo administration and NYSTAR for comment on the issue were not returned.

"Some states are being very aggressive on recruitment in this field," said Leibel. "I think in the grand scheme of things it will prove to be very shortsighted to not invest in biomedicine. In the 21st century biomedicine will be where the jobs are going to come from, like the auto industry of the 20th century, it is going to become more and more important as we develop treatments. You want to be able to have the infrastructure to attract the industry like Detroit did [in auto], the states that don't are going to suffer."

Leibel said that he thinks increasing investment in biotech is a surefire way to increase the state's median income and education prowess, and spur the economy. And then there are the actual implications of medical discoveries.

"Treatments developed from our work for diabetes and obesity could have a major impact on the state budget, on healthcare costs around the nation," he said. "And those discoveries could be made in the State of New York."