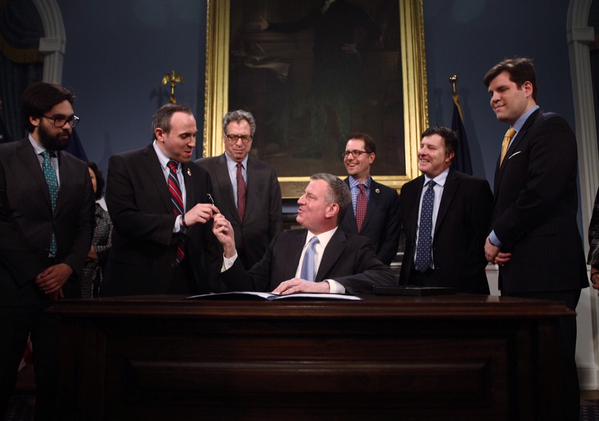 New York City politics might seem convoluted now, but for nearly a century the city was governed by the Board of Estimate, an eight-member body as opaque and sinister as it sounds. On March 22, 1989, the U.S. Supreme Court declared the Board of Estimate unconstitutional. The subsequent revision to the City Charter created the political system we have today. Twenty-six years after the Court's decision, a few of the attorneys involved with this landmark case have mixed reviews of exactly how major a turning point it was for the city.

Richard Emery was driving in his car when the idea for a lawsuit hit him. It was 1982, and a federal court had just declared New York City's use of "at-large" Council members unconstitutional. At the time, New Yorkers were represented by 35 local Council members, along with ten at-large reps, two per borough. The court held that this violated the principle of "one person, one vote," which, despite sounding like a sacred democratic principle, had only been a requirement in local government for about twenty years - since the Supreme Court's decision in Reynolds v. Sims.

Emery, an ACLU attorney in his mid-30s, and his colleague, Art Eisenberg, debated whether the courts would apply a similar standard to the Board of Estimate, which had a far bigger impact on city life than the City Council.

The Board of Estimate had run New York City politics since the five-borough consolidation of 1898. Comprised of the mayor, comptroller, city council president - all of whom were elected citywide - and the five borough presidents, the Board of Estimate was responsible for land use, city contracts, and budgeting. Most citizens never saw the Board of Estimate in action, testifying in front of their proxies while the real power brokers cut backroom deals.

For Emery and his plaintiffs ("friends from Brooklyn"), the lawsuit wasn't just a Constitutional Law exercise. "Services and funding for specific projects were very disproportionate," with Staten Island much more likely to receive city support than underfunded parts of Brooklyn, Emery claimed. In addition, "Virtually all corruption was focused at the Board of Estimate."

That charge was validated when U.S. Attorney Rudy Giuliani rained down a hailstorm of criminal indictments on elected officials across the Bronx, Brooklyn and Queens, a tale of corruption told masterfully by investigative journalists Wayne Barrett and Jack Newfield in City for Sale. The corruption scandal wrecked Mayor Ed Koch's third term, but not before he set in motion two commissions that dramatically shaped New York City politics to the present day.

Frederick A.O Schwartz, Jr. (descendant of the toy retailer), whose brilliant legal career included uncovering CIA assassination plots, had been named by Koch as New York City's Corporation Counsel in 1982. The "Corp Counsel" represents the City in everything from sidewalk slip-and-falls to massive municipal contracts. By 1985, Schwartz was pretty sure that the Board of Estimate was losing in court, and advised Koch to plan for an alternative. Koch appointed legendary New York crisis-fixer Richard Ravitch to head a City Charter revision commission. That commission ultimately recommended the creation of the city's first public financing system for elections.

Meanwhile, Emery and his plaintiffs won a string of federal court decisions before the U.S. Supreme Court agreed to hear the city's appeal. For oral arguments in 1988, Emery faced off against the city's new Corp Counsel, Peter Zimroth. Zimroth called the Board of Estimate "the glue which has kept the City of New York together" and argued that the Board of Estimate had been a compromise between the many boroughs, villages and towns that had voted to unify in the 1894 consolidation referendum. Though he made other legal arguments, Zimroth hung his hat on the city's longstanding political support for the Board of Estimate system.

On March 22, 1989, the Supreme Court delivered a resounding 9-0 vote against the Board of Estimate for violating "one person, one vote."