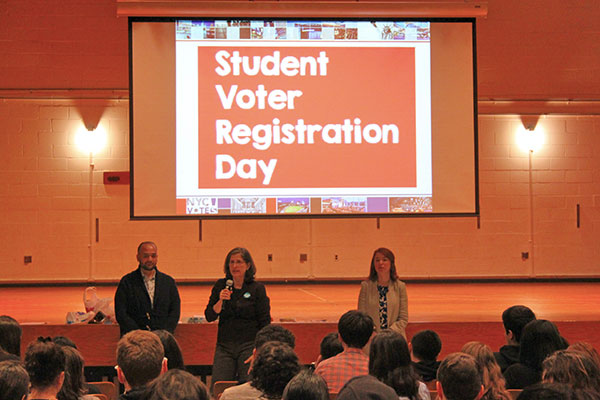 City Council members; representatives from NYC Votes, the voter engagement arm of the city’s Campaign Finance Board; and advocates led workshops at the schools during which they sought to connect students to local government and encourage them to register to vote.

Council Member Helen Rosenthal, who initiated SVRD, led the session at Frank McCourt High School in her Upper West Side district. Rosenthal half-jokingly told the students in attendance, “If I suck, I want you to vote me out of office, but you have to register and vote [to do so].”

Rosenthal said that the first SVRD day was received with unbelievable enthusiasm. “I'm getting tweets from other council members who were at [schools], and also those who really wanted to participate but couldn’t. When you're at the school you can really see that it is so important to the students to have their voices heard.”

Rosenthal and those with her at Frank McCourt, which is one school located in the Brandeis High School Campus building, spoke to about 40 juniors during one class period and then about 100 seniors in another. She also spoke with students from two of the other schools in the Brandeis complex.

When Rosenthal learned that 80,000 voter registration cards go out to high schools each year and very few get sent back, she says she started thinking about how more could be done to ensure that 18-year-olds know their rights and the value of voting.

Rosenthal said that the Department of Education (DOE) would be the entity to really make SVRD a successful annual event in all high schools, but she is happy to lead the initiative and implement the pilot program. For the first SVRD, participants utilized a curriculum created by NYC Votes, which already leads other civic engagement workshops in city schools. If SVRD is to expand from the initial 25 schools to all of the hundreds of city high schools, NYC Votes will likely be integrally involved along with the DOE.

It is not immediately clear how many registration forms were collected at Friday’s workshops, but Rosenthal said that she cannot wait to find out.

Kaylah Bilal, a junior at one of the schools in Brandeis, had naturally never heard of the new SVRD, and she did not see a banner or poster in her school. Her enthusiasm was limited when she learned about it. “I’m just not into politics, the whole system,” said Bilal, who lives in Bronx.

SVRD is aimed at helping students like Bilal connect their everyday lives to issues and to voting. During a 45-minute workshop, volunteer facilitators at each school gave presentations and asked questions following the standard curriculum specifically designed for SVRD. The brain behind the programming is Chyann Sapp of NYC Votes and the Campaign Finance Board. Her full-time job for the past four years has been increasing youth voter engagement and turnout in New York City, a post that exists in few other cities in the country.

Sapp says that lack of education probably ranks higher than apathy as the top reason young voters are particularly inactive voters. Statistics show that eligible voters who do not cast ballots are mostly not registered to vote at all, and that being registered makes potential voters much more likely to go to the polls.

There are, of course, other barriers people point to in explaining low voter turnout, and efforts are underway to improve access to absentee ballots, among other changes.

The seminar style of SVRD is especially effective to educate students in comparison to simply handing out fliers and forms because students ask real-life questions face-to-face, Sapp says. She added that students “need to know why” voting matters, not just be given a piece of paper that allows them to register.

Beth Newcomer from Rosenthal’s office assisted Murad Awawdeh and Betsy Plum from the New York Immigration Coalition in facilitating the two workshops with McCourt students. Awawdeh and Plum started by asking students to rate how much power they perceive having in their circles of family, friends, school, community, and government. Students largely explained that they perceived themselves to have much more power in their family and friends circles than in their government circle, in which some cited zero percent influence.

As the workshop progressed, questions became more concrete; “Do you know what a community board is?” and “Do you know which elected official oversees the MTA?” among them. Few students raised their hands to indicate they did; one student wondered out loud about the meaning of the word “controller” when facilitators said, “Do you know who your city controller is?” (The answer, of course, is Scott Stringer, one of just three popularly-elected city-wide elected officials along with the mayor and public advocate.)

Students responded with an overwhelming “no” when asked if they had studied the Constitution and its amendments at school, but when Plum asked what was going on around 1976, a few students said the Vietnam War. She then explained the context of 1976’s 26th Amendment, which granted 18-year-olds the right to vote. “Young people were drafted, and they thought, ‘well if I can go fight and maybe die for my country, shouldn’t I be able to vote for my country?’”

Almost none of the students had heard of DACA, President Barack Obama’s immigration program that gives students who came to the U.S. as children protection from deportation and permission to work, though not the right to vote. Promoting awareness of DACA was a secondary aspect of the SVRD initiative. “If you have friends who are immigrants please spread the word and let them know” about DACA and access to the right to work, Plum told the students.

Near the end of the presentation voter registration forms were passed out to students, along with stickers, bracelets, and candies. One student told her friend, “I’m a voter” after turning in her completed registration form.

Micah Dicker, Drilona Bajrami, and Chelsea Solis, all graduating seniors at Frank McCourt High School, were among the few students in the workshop who knew of Rosenthal, the local city council member. The three teens were involved with participatory budgeting in the council district; Dicker and Bajrami interned for Rosenthal.

Dicker and Solis mentioned that their families’ financial situations make them want to do more to change the political system. “I think a lot of people don’t vote because they just think of what happens now rather than what would happen in the future if you can’t pay for something or you can’t find a job,” said Solis.

All three registered to vote during Friday’s workshop. “It’s our future that we need to take into account,” said Bajrami, adding that for those that don’t vote, “we shouldn’t be complaining if something doesn’t go our way.”