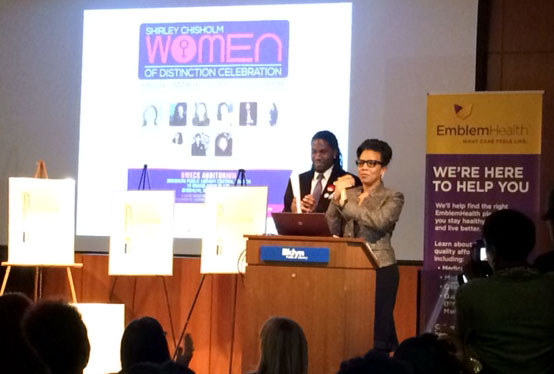 On Monday, March 30, the New York City Council will host a Women's History Month celebration at City Hall. Council members will likely celebrate women heroes of city government, past and present, and acknowledge the history-making leadership of both Council Speaker Melissa Mark-Viverito, the first Latina to hold the position, and Public Advocate Letitia James, a former council member who is the first woman of color elected to city-wide office.

At a different Women's History Month celebration last Friday evening in Brooklyn, Mark-Viverito lamented the fact that there are currently only 15 women among the Council's 51 members. She also said that with six, including herself, term-limited out of office after 2017, there is a need to recruit a new wave of women to run for local office. There's a good chance this message will be echoed Monday night in Council Chambers.

Monday's event will come on the heels of a month of City Council preliminary budget hearings held in those very chambers. One such hearing, on Tuesday, March 17, featured the Council's Committee on Women's Issues, which is chaired by Council Member Laurie Cumbo. Without one clearly defined city agency to call in for budget oversight on its own - like, for example, the Education Committee has the city's Department of Education - the women's issues committee is matched with other committees for budget proceedings. Groupings are not uncommon, as there are 38 council issue committees. But, Women's Issues is one of only a handful of council committees dedicated to a specific demographic group and where it fits for its budget hearings defines its focus narrowly.

Because it has jurisdiction over child development, for budget hearings the Committee on Women's Issues joins the Committee on General Welfare and the Committee on Juvenile Justice to analyze the budget of the city's Administration for Children's Services (ACS). For budget purposes, it means a definition of "women's issues" as those related to children, poverty, and families in crisis.

On the City Council website, the women's issues committee has the following description: "Issues relating to public policy concerns of women, domestic violence, Office to Combat Domestic Violence and Agency for Child Development."

As Mark-Viverito, Cumbo, and many others readily note, the "public policy concerns of women" are unlimited. Asked by Gotham Gazette for more clarity on the budget hearing grouping, council sources pressed that the Council has been extremely active in addressing a wide variety of issues important to women and that female council members are at the forefront in many ways - points that are true, of course, especially considering that both the speaker and the powerful finance committee chair (Julissa Ferreras) are women.

When asked to further explain the budget hearing grouping, Council Member Cumbo said in a statement, "Through our collaboration with the Committees on General Welfare and Juvenile Justice, we have worked to assess the operations of the City agencies most frequently used by women and families."

Getting at her committee's much broader focus than what its budget hearings indicate, Cumbo also said that Women's Issues "is uniquely positioned to address the challenges faced by the millions of women who make up more than half of our city's population. We have a broad responsibility to ensure that women from all walks of life have access to critical programs and services to meet their personal, familial, and professional obligations." She points to wage equity, education, entrepreneurship, and affordable housing among key issues she is focused on as chair.

Since the start of 2014, when Cumbo became chair, Women's Issues has held joint hearings with the a variety of other committees including education, finance, civil rights, public safety, and health, among others. These groupings, unlike that for the budget, suggest the reality, that all issues are "women's issues."

To that end, women members of the City Council meet as a Women's Caucus - as do the Council's Jewish members, LGBT members, and Black, Latino and Asian members - and evaluates how to best influence public policy of all kinds. Of these four caucuses, the only one with a parallel council committee is women's. Perhaps the Women's Issues chair should be at most, if not all, council budget hearings.

On the subject, Democratic political consultant and City & State columnist Alexis Grenell said, "We have a tremendous amount of female leadership right now in New York City, a feminist Mayor, and receptive male colleagues in government. It's a very interesting time to expand the conversation about so called "women's issues" beyond traditional categories and think about what a gender mainstreaming agenda might look like."

Council Member Stephen Levin is the chair of the General Welfare Committee. On the subject of why his committee is partnered with Women's Issues for budget hearings, he emphasized that it should not be read into too heavily.

"There's a significant amount of overlap in the issues that we work on with the women's committee," said Levin. "So when you're talking about child care, child welfare issues, there's certainly an area when we've done joint hearings." He concluded, "I wouldn't read too much into it other than there are a lot of times that we do work closely together."

At the preliminary budget hearing, Cumbo gave opening remarks, acknowledging that it is Women's History Month - calling it "herstory" month - and recognizing the great strides that women have made and will continue to make. She singled out Speaker Mark-Viverito and Public Advocate James for their remarkable achievements. She also spoke about the work that the Administration for Children's Services (ACS) must do to "positively impact the women and girls of New York, including women and girls of color that face even greater economic disparities."

With Mark-Viverito and James, Cumbo will co-host the event at City Hall Monday evening, as she did a Women's History Month event in Brooklyn on March 20 with colleague Jumaane Williams.

Pointing to the overarching mission of her committee, Cumbo said at the budget hearing that it is essential the City supports children and families, "while also empowering the women across our city."

She told Gotham Gazette that she is continuing to explore "future opportunities to work with multiple Committees year-round to identify effective ways to cultivate a more inclusive society where any woman can reach her full potential."