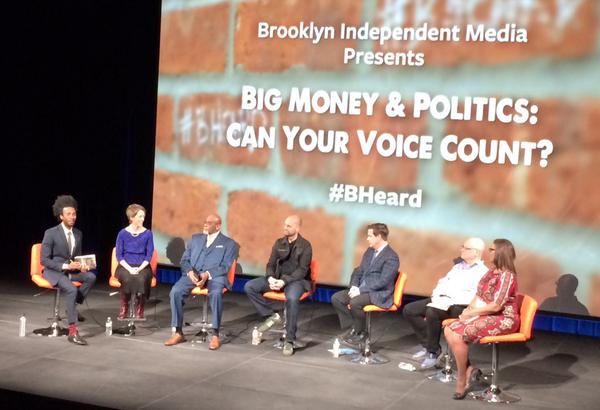 BROOKLYN - An expert group was called together Thursday night in Brooklyn for a town hall on the influence of big money on politics and to answer questions about what can be done to fix a system that virtually all in attendance agreed is broken.

Hosted by non-profit organization Brooklyn Independent Media, or BRIC, panelists broadly diagnosed the disease eating away at New York politics and offered antidotes, which combined may provide a cure.

About 100 people attended the event in space at BAM in downtown Brooklyn as the panel of politicians, activists, and advocates argued solutions to the problems of voter apathy and lack of engagement among New Yorkers who feel powerless to effect change in a system heavily influenced by monied special interests.

"One of the ways, and this is a traditional american way to deal with the problem of money in power, you change the campaign finance system but you also take it out at its root and make sure that we have decentralized power instead of this concentrated power," said Teachout, stressing that big banks need to be broken up to reduce their influence on politicians.

Teachout focused heavily on campaign finance reform while challenging incumbent Gov. Andrew Cuomo last year. "In some ways these campaign contributions are the gateway drugs to bribes," she later added as the panel discussed corruption in government.

The public financing of elections was instrumental in James being elected the first woman of color in a citywide office, the public advocate said. With its public matching system and spending caps New York City is a model for campaign finance reform and encourages political participation, James said. It was a point echoed by others, including Dadey, who leads a good government group. James also highlighted New York City's expanding participatory budgeting initiative by which City Council members allow their constituents to determine how some capital funds are spent.

The panel spoke of apathy among voters juxtaposed with politically engaged but disillusioned youth. "We're at the bottom of the barrel in the country in terms of the number of voters, eligible voters, coming out and voting," said Dadey of Citizens Union. "And why is that? I think people feel a sense of powerlessness, a sense that they're not able to influence the decisions. But by not voting we're giving up and what we need to do is take a look at ways that we can engage people more in our democracy."

Dadey said public funding of elections can both counteract the influence of big money and also motivate people to get involved in political life. He also called for a series of voting reforms to make it easier for people to cast their ballots.

Ted Alexandro, who was an active member of the Occupy Wall Street movement, said people are disillusioned by a "suffocated system" where only money ensures access to power. "People may [ask], 'What happened to Occupy?' but if you look around Occupy may have sparked a thousand other little things and made activism potent again," he said.

The movement, said Doug Henwood, momentarily changed the political discourse where influence and wealth were concentrated at the top. "People then get the feeling that everything is being decided for them," he said. "There's no popular influence over public policy so 'why bother?'" He emphasized the need to turn this popular spirit of uprising into long-term goals.

Al Vann was on the same page. "There is a significant role for the power of protest but it has to lead to the real power," he said. Beyond getting people's attention, protest "has to have more to it," he added. He prescribed four elements to restore and sustain democracy: an informed and engaged citizenry; an expectation of integrity of and adherence to some moral standards by elected officials; professionalised electeds; and stricter penalties for those who betray the trust of the public.

Dadey reiterated, and other panelists agreed, that New York must remove barriers to democratic participation by establishing early voting, mail-in and online voting, and easier voter registration. As they touched upon broad subjects from gentrification to increasing the power of the public advocate, net neutrality, and public education, one thing rang clear: hope.

All those on stage - and many in the audience - showed energy and enthusiasm about making change. James put it succinctly: "I'm not dismayed by apathy." Instead, James said she wants to inspire people to run for office and speak to the "bread-and-butter" issues that affect the everyman but politicians are afraid to talk about. "I'm drunk on hope," she said.