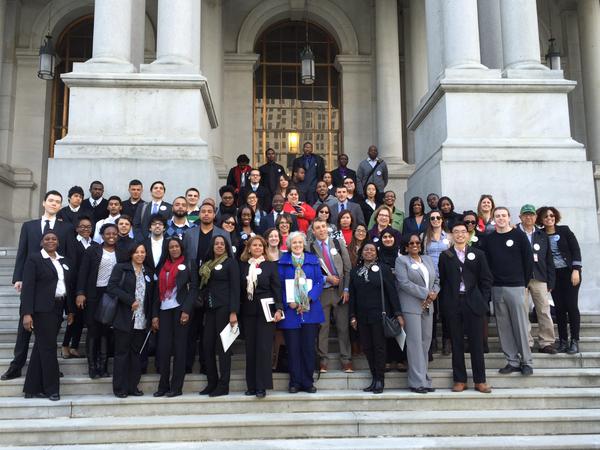 On a crisp Wednesday morning, two buses pulled up outside the New York State Capitol in Albany. Their cargo: a delegation of about 100 students, volunteers, and good government activists who travelled from New York City to advocate for voting reform.

Splitting into groups of five or six, activists worked the halls of the Capitol and the legislative office building, participating in back-to-back pre-arranged meetings with legislative staff or legislators themselves.

Preparing for its first meeting, one group circled around their leader Onida Coward Mayers, the director of voter assistance at the CFB. "We're not lobbyists," Mayers said in her short pep talk. "You are an individual, a member of the public, and we all want the same thing. We're thanking [our representatives] for their work, but they need to do more. We're holding their feet to the fire."

NYC Votes' advocacy day comes at a time when the Legislature is just getting back to work, filling the vacuum after the budget session. "Everything is budget here till April 1. The budget kinda sucked the oxygen out of the air," said Bryan Clenahan, counsel to Senator Diane Savino, as he addressed the Mayer-led group of activists, which included members of Dominicanos USA, the League of Women Voters, and the NAACP.

The Legislature is in session through mid-June, with lawmakers in Albany a few days most weeks until then. There are many issues on the table that were left out of the budget, including minimum wage, criminal justice reform, and mayoral control of schools, but advocates wanted to make sure that election reform is also part of the discussion.

Advocacy day was an opportunity for many of the advocates to meet their representatives and express their priorities directly. Rob Reynolds, 28, works in tax preparation in Brooklyn. He was one of many independent members of the public, not affiliated with any organization, who joined NYC Votes for Wednesday's trip. "The day was very productive," he said. "We met with a lot of legislators. We shared with them our thoughts and ideas for improving the electoral process in New York. A lot of them seemed very receptive and seemed supportive of our ideas."

Reynolds believes wholeheartedly that New York needs to improve its voter turnout, especially by taking lessons from other states that have a better record. For him, the day was an exciting opportunity to be heard. But it was not without its disappointments, particularly an Assembly member who Reynolds did not want to name publicly, but said was more interested in his own election efforts than expanding the democratic process. "There is an inherent problem when the people who we elect get to choose who elects them and its not right," said Reynolds. "Its not morally fair - in a democracy that's not how it should work."

The numbers in yesterday's delegation are an indicator of an increasing consciousness among New Yorkers that reforming the voting process is necessary, particularly considering that New York hit the historically low point of 28.8 percent voter turnout in the 2014 gubernatorial election.

Through the day, the activists tried to get legislators on board with specific bills. One bill provides for online voter registration through the Board of Elections. Currently, New Yorkers can only register online through the Department of Motor Vehicles. The advocates also asked legislators to support the Voter Friendly Ballot Act, sponsored by Assembly Member Brian Kavanagh, which improves ballot design.

Although there was no specific bill on the agenda for early voting, some of the activists were surprised to learn in a meeting with Senator Tony Avella that he had introduced a proposal for weekend voting.

"There was almost unanimous agreement among all the legislators that we met that voting was a top priority and that they were in favor of greater transparency and access to the voting process in principle, but they wanted to read the bills that were at issue," said Bridgette Ahn, president-elect of the Korean American Lawyers Association. "I think an important component of this is establishing a relationship, raising awareness, bringing the information to key decision-makers, following up with them, and continuing on the advocacy front."

At the end of the day, NYC Votes had made its mark. The delegation was recognized both in the Assembly and Senate sessions for its work in promoting voting reform. "We do know the politics still plays after we leave their four walls," Onida Coward Mayers said with cautious optimism. "I'm very proud of the message that we sent that we will be heard," she said. "There needs to be election reform, citizens matter and citizens want change. [New Yorkers] want an easier, friendly, 21st century democracy."