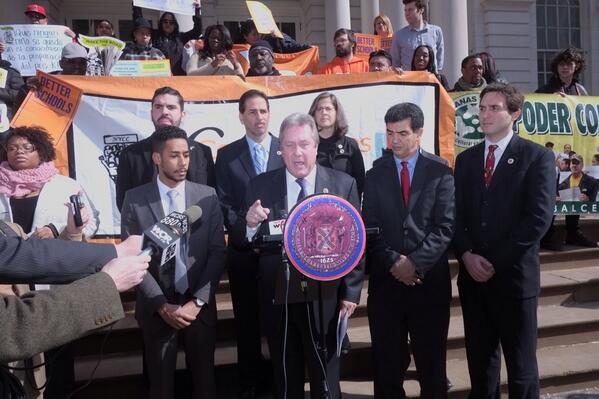 At a hearing of the City Council's Committee on Governmental Operations Thursday, issues of community board function will be taken up through bills to introduce term limits for board members and to add professional urban planners to board staff.

The term-limit bill, introduced by Council Member Daniel Dromm in December last year, would allow community board appointees to serve up to six consecutive two-year terms. Currently, there is no limit on how many terms a community board member can serve. The bill, co-sponsored by Council Member Ben Kallos, who chairs the government operations committee, would enact the six-term limit starting for members appointed in April 2016.

The bill provides exemption for current board members who would be grandfathered along current no-limit rules. Community board members are appointed by borough presidents; there are 59 boards in the five boroughs.

"This is just one of the areas in which community boards should be reformed," said Lauren George, associate director of good government group Common Cause New York. "In terms of increasing representation, this will be a big step in improving the way community boards represent the changing dynamics of the city. When experienced members basically get a lifetime membership, they tend to have entrenched interests. They don't reflect the neighborhood, age and ethnic diversity, or sometimes even gender diversity."

George also said recruitment to community boards is extremely challenging, which is especially true in certain parts of the city, and term limits could encourage new people to join.

"Citizens Union supports reforms to strengthen community boards through increased resources, such as urban planning staff, as well as the institution of term limits," said Rachael Fauss, director of public policy at Citizens Union, in support of the principles behind both bills to be heard Thursday. She added, though, that "Term limits, which we believe should be phased in, rather than grandfathering in current members, will ensure that the representation of boards is able to keep pace with changing demographics, such as emerging immigrant communities."

Ed Jaworski is president of Madison Marine Homecrest Civic Association and a first-year member of Community Board 15 in Brooklyn. He said he had been applying for more than ten years before he finally got appointed. "The appointment process has to be depoliticized and more transparency is necessary," he said. "But that doesn't seem to be on the horizon so at least term limits are a first step."

"You need rotation," Jaworski added. "You need fresh blood and you need to remove people who aren't contributing. Over time, they just become Yes People."

At Thursday's hearing, Jaworski will testify in favor of Dromm and Kallos' bill and even suggest that the entire appointment process of community boards be reviewed. "If some of these people are political appointments, let the politicians move them on and up," he said.

Kallos expects strong support from good government groups and from community members at the hearing. "I think having term limits will provide healthy churn," he said on Wednesday. "It's a good step and there's precedence for it in government. It provides a good incentive and gives time to people to get things done, learn the trade, and then pass it on."

Neither bill being heard Thursday will be voted on, a committee vote on the bills would come at a subsequent hearing, perhaps after tweaks to the bills. It is expected that there will be opposition voices at the hearing, especially on the term-limit bill, which does not appear to have support from the borough presidents.

Kallos is the prime sponsor for the urban planner bill, which he introduced last month. It is likely to see little opposition.

The bill would provide for an urban planner position for each community board and create planning offices under the five borough presidents. Common Cause's George said her organization supports both bills. "Boards are crying out for support. Expertise and planners are essential," she said.

Jaworski agreed. "That's a very good proposal. There's no planning going on at the boards. And City Planning doesn't do planning, they do rezoning."