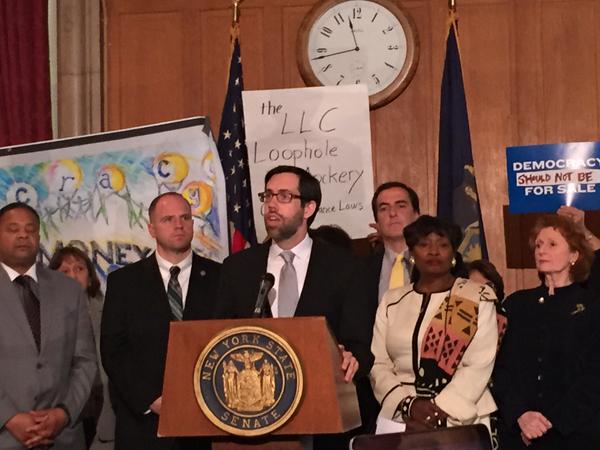 State Senator Brad Hoylman, generally soft spoken, is so frustrated by the Senate's committee system that he calls it "a glorified joke." He has had his bills bottled up and left to die without a floor vote despite using all the proper procedures to push for consideration, laments the Manhattan Democrat.

In Albany, it is simply a way of life for members of the minority to propose bills only to see them referred to committee where they die, never reaching a floor vote, never actually being the subject of active public debate.

That's why legislators and good government groups were almost caught off guard on Monday when the Senate election committee approved Sen. Daniel Squadron's bill that would end the LLC loophole that allows wealthy interests to pour unlimited amounts of cash into electeds' already-bursting campaign coffers.

Senate Republicans remain steadfastly opposed to campaign finance reform, including closure of the LLC loophole, and Squadron's bill only came up for consideration after he used a parliamentary procedure to force it onto the schedule. The bill was swiftly approved without a voice vote. On its face everything seemed peachy keen - except that Democrats had voted for the bill with recommendation, Republicans without, and the bill was quickly referred to the Corporations Committee where the process resumes - if the committee meets and puts it on the calendar, which it is required to do within its next two meetings (if they occur this session). Most observers bet the bill will die there, but the committee could approve it without any fear that the bill will come to a floor vote in front of the full Senate.

Albany's committee system is in some ways powerless - instead of vetting bills in committee and eventually sending them to the floor for a vote before the full legislative body, bills, regardless of the support they enjoy, can be bottled up by leadership. Bills favored by leadership in many cases actually skip consideration of the most appropriate committees and are delivered through the Rules Committee controlled by leadership. It is a convenient way to make it look like work is being done and more bills are really being considered while avoiding the negative impacts of voting down popular legislation.

"The system is not like it is in Congress, it isn't like you learned in School House Rock," said Senator Hoylman.

Hoylman watched on Earth Day as a slew of environmental bills were delivered straight from the Rules Committee, completely bypassing Environmental Conservation where he is the ranking Democrat. "What we see in the committee process is a pattern of obfuscation," Hoylman told Gotham Gazette. "The concern is that it looks like we are doing the people's business by sending them to committee, but a great number of bills don't ever go through committee."

It has simply become a futile struggle for some members of the minority in each house, legislators who see their bills ignored for years at a time despite putting in motions for consideration. Senate Democrats regularly receive notices from the majority that according to their interpretation of the rules a notice for consideration should have been put in with 90 days notice rather than the 45 stated in the Senate rules.

"A true democracy does not exist in the Senate," said a slightly bemused Sen. Michael Gianaris, Democrat of Queens. "Committees are just another tool for the majority to use to cement its power."

With a slim majority and its Leader Dean Skelos under investigation, Republicans appear to be avoiding as much debate as possible this legislative session, which is scheduled to run until mid-June. In some cases they would rather force their members to vote against bills that might be popular in their districts. In other cases some floor votes might cause a rift with their legislative partners in the Independent Democratic Conference, or IDC. "It seems like a lot less substance is getting done this year," said Gianaris, who laments how many policy items were dropped from budget negotiations.

Hoylman and other Senate Democrats say they want to see the process changed so that committees have real authority and consider dissenting opinion. Hoylman said his conference "must" change the system when they win control of the chamber (when that might be isn't exactly clear, though Democrats are hoping to ride a Hillary Clinton wave in 2016).

The Senate rules were last reformed in 2009 after the Senate Coup was resolved, when the chamber was under extreme scrutiny. Now-convicted Sens. Malcolm Smith and Pedro Espada were serving as Senate President and Majority Leader, respectively.

One of the major changes allows for a bill's sponsor to force it to a vote if they collect signatures of three-fifths of the 63 sitting senators. Another rule allows for legislators with a bill on third reading to have it placed on the chamber's active list with a vote of the majority of members. Committee chairs were term limited to 8 years and allowed to hire their own staffs, rather than having staff provided by leadership. Finally, there was the stipulation used by Squadron in the LLC debate that allows for the sponsor to have their bill considered by committee within 45 days.

Squadron, in fact, was deeply involved in crafting those rules changes. He says he would like to see further reforms, but there is an easier fix at hand. "In the six years since I worked with the Democratic majority to create the Motion for Committee Consideration," he said, "we have seen ever-evolving strategies to undermine its basic goal: empower members to ensure consideration of important issues and, if the majority of the house supports them, pass them through the Senate. There's no question that a number of reforms would increase the role of committees and empower individual elected members, but to start, one solution is to be faithful to the spirit of the rule that already exists."

Some of the Senate's most notorious members used their positions as committee chairs to gain influence and boost their relationships with lobbyists and industry. Before he launched the Senate Coup in partnership with Skelos, Sen. Pedro Espada battled with the Democratic majority for more power. He was able to leverage his participation in the narrow majority for positions as vice president of the Senate rules committee and to many housing activists' chagrin, he was appointed head of the housing committee as rent laws were set to expire. Espada appeared to bottle up pro-tenant legislation. He maintained the ability to exert his own control over the committee because his loyalty to the Democrats kept them in the majority - until June 2009 when he joined the Republicans.

Espada's good friend convicted Sen. Carl Kruger used his position as head of the finance committee to advance his relationships with representatives of business groups who wanted him to direct discretionary funding to their projects. Kruger pleaded guilty to taking $500,000 in bribes in exchange for sponsoring legislation and state cash. An FBI listening device recorded one of Kruger's co-conspirators who was seeking $9 million for a bridge and $4 million for a park reminding the senator, "You're the finance committee chair."

[Related: Quiet Before the Storm in New Phase of Mayoral Control Debate]